The Abu Akleh blood libel does have one novel aspect to it. A new actor has joined the pile-on. 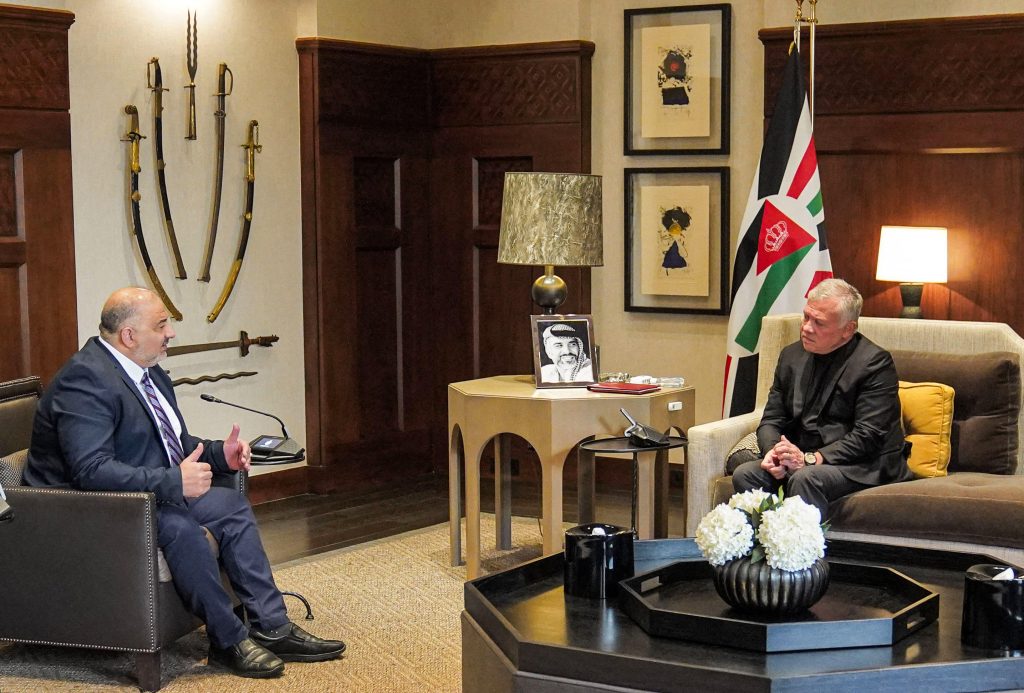 The responses elicited by the death of al Jazeera reporter Shireen Abu Akleh were written hundreds of years ago. Blood libels — the practice of using the death of non-Jews as a means set up the Jewish collective for demonization, condemnation, ostracism and mass murder — may vary in their proximate details. But the substance is always the same. The Jews are guilty.

Israel has been subjected to repeatedly blood libels. Their details are always more or less the same. Israeli forces fight terrorists. Non-Jewish civilians die, and Israel’s right to exist is rejected by “right thinking” people the world over. In the case at hand, on Tuesday night IDF forces were carrying out counter-terror operations in Jenin – the terror capital where most of the recent terror attacks were planned. 19 innocent Israelis have been murdered in these attacks. Tuesday night, Palestinian terrorists opened fire on the IDF forces shortly after they entered the city. In the ensuing firefight, Abu Akleh was shot. Palestinian footage indicates fairly clearly that she was killed by the terrorists.

But facts are meaningless in a blood libel. So all the regular actors in contemporary morality plays are reciting their lines in turn. The Arabs, the Europeans, the Americans, the UN, and most importantly the Arab and Western media are all playing their assigned roles and using Abu Akleh’s death as the basis of a mass indictment of Israel’s very existence.

The Abu Akleh blood libel does have one novel aspect to it. A new actor has joined the pile-on.

Ra’am, the United Arab List is a Muslim Brotherhood political party in Israel’s Knesset. Its leader Mansour Abbas fundamentally changed Israel’s political realities when he broke with 73 years of convention and joined the governing coalition last year, giving it its bare majority of one vote. With his four-seat faction, Abbas controls the fate of Prime Minister Naftali Bennett’s and Alternate Prime Minister and Foreign Minister Yair Lapid’s government. If he bolts, the government collapses.

Abbas presents himself as a moderate leader whose only concern is the welfare of Arab Israelis. His partnership in the coalition, he proclaims, is focused on issues like sanitation and electricity, not Arab nationalism or jihad.

Given Abbas’s mild-mannered persona, Ra’am’s statements following Abu Akleh’s death were stunning. Ra’am responded to her death by demanding an international inquiry. Ra’am’s message is not simply about virtue signaling. It is a proclamation. The party that controls Israel’s government considers Israel’s governing institutions – the IDF, the police, the Health Ministry, the forensic medical institute – fundamentally illegitimate. Israel, in other words, is fundamentally illegitimate. By demanding an “international investigation,” Ra’am is effectively demanding that Israel surrender to the braying blood libel mob.

Ra’am’s statement was not an isolated incident. It is part of its much wider use of relations with foreign governments and institutions to advance the Islamic Movement’s agenda from within the Israeli governing coalition. Abbas is carrying out an active, independent foreign policy that is hostile to Israel’s most fundamental national interest – the preservation of its sovereignty.

At least publicly, the focus of Abbas’s diplomatic efforts is Jordan. Since setting up the Bennett-Lapid government, Abbas has met twice with King Abdullah of Jordan. Last November, Abdullah and Abbas met for four hours at Abdullah’s palace. The regime-controlled Jordanian media gave expansive coverage of the meeting. The coverage was particularly stunning since when Abdullah met with Bennett in the summer, he insisted that no photos be taken and that the meeting be kept secret.

Abbas’s ties with Abdullah serve the interests of both men. Jordan’s Islamic Waqf employs the personnel in the mosques on the Temple Mount. But over the years, the Waqf’s personnel have switched their allegiance from Jordan to the PLO to the Islamic Movement and Hamas.

Whereas King Abdullah’s father the late King Hussein viewed the Palestinians, who comprise a large majority of Jordan’s population as an existential threat to the Hashemite regime, Abdullah has thrown his lot in with the Palestinians, to the detriment of the Beduin minority in Jordan. By embracing the Muslim Brotherhood through Abbas’s Islamic Movement, Abdullah seeks to stabilize his grip on power at a time of economic and political instability in Jordan.

For his part, Abbas is using Abdullah, who boasts close ties to the U.S. foreign policy establishment, the EU and the Israeli left and security establishment as a proxy to advance the Islamic Movement’s strategic goals vis-à-vis the Temple Mount and Israel as a whole.

The first unmistakable sign of the fusion of Jordan’s positions with those of the Islamic Movement, (and Hamas) came in the midst of the Muslim riots during the month of Ramadan last month. On April 18, Jordanian Prime Minister Bisher Khasawneh enthusiastically supported the rioters. In a speech before the Jordanian parliament he said, “I salute every Palestinian, and all the employees of the Jordanian Islamic Waqf, who proudly stand like minarets, hurling their stones in a volley of clay at the Zionist sympathizers defiling the Al-Aksa Mosque under the protection of the Israeli occupation government.”

A week later Abbas was back in Jordan for another four-hour meeting with Abdullah. Judging from what followed, it’s clear the two men agreed on a joint policy aimed at coercing Israel into abrogating its sovereignty over Judaism’s most sacred site.

Almost immediately after Abbas returned from Jordan, Abdullah submitted a list of radical – indeed, fanatical – demands regarding the future management and control of the Temple Mount to the Biden administration. The Hashemite monarch is scheduled to discuss the list at a White House meeting with President Joe Biden.

Abdullah’s list contains a number of anti-Semitic, indeed, Islamic supremacist demands. For instance, he demands that Jews alighting to the Temple Mount abide by a Wakf-dictated dress code. Abdullah also demands that all Jews and Christians wishing to visit the Temple Mount submit a written request to the Wakf for permission. The Wakf will be the only authority with the right to permit such visits. Another demand is to strictly limit the area of the Temple Mount where non-Muslims would be permitted to walk.

If those demands weren’t bad enough, Abdullah also demands that Israeli police be barred from entered the mosques altogether. It goes without saying that if Abdullah’s list of demands is even partially met, Israel’s sovereignty over the Temple Mount will be a thing of the past.

Abdullah’s list is already bringing rewards. Rather than tear up the bigoted document, the Biden administration is catering to it. Early this week it was reported that during Biden’s scheduled visit to Israel next month, he intends to visit Al Makassed Arab hospital in eastern Jerusalem. No Israeli presence will be permitted during the course of the Presidential visit. The implication is clear. Biden is the first president to openly support the abrogation of Israel’s sovereignty over parts of its capital city.

That Abdullah submitted his demands to Washington immediately after he met with Abbas is proof enough that the events were linked. But Abbas dispelled any residual doubt when he announced last weekend that Ra’am’s position on the Temple Mount is Jordan’s position. Abbas further stated that Ra’am is conditioning its continued support for the Bennett-Lapid government on the government’s willingness to set up a joint Israeli-Jordanian committee to discuss Abdullah’s demands. In other words, Bennett and Lapid must agree to negotiate Israel’s sovereignty over the Temple Mount if they wish to keep their jobs.

Jordan apparently is not the only foreign country where Abbas operates. Earlier this week, Channel 14’s Yaara Zered reported that Abbas spent several days in Turkey last week. Details of the trip are sparse. But what is clear enough is that as the deputy head of the Southern Branch of the Islamic Movement, Abbas had plenty of things to do in Turkey.

Last December, Ad Kan, an Israeli NGO that penetrates radical Israeli NGOs to expose their subversive activities published an investigative report exposing the Southern Branch of the Islamic Movement’s ties with Hamas. Most of the movement’s cooperative efforts with the terrorist organization are carried out by its NGOs. These groups in turn are led by senior members of the Islamic movement, including senior Ra’am party officials. Beyond their operations in Israel, Gaza, Judea and Samaria, a focal point for the organization’s activities is Turkey.

For instance, a key Hamas-tied NGO controlled by the Islamic Movement is the Igatha 48 Association. Igatha 48 Association is led by senior members of Ra’am. The group has close ties with Turkish NGOs that are directly and indirectly tied to Hamas and to the Islamist regime of Turkish President Recep Erdogan.

The Ad Kan report showed that Igatha 48 Association cooperates closely with Al Furkan, a Turkish NGO openly supportive of Hamas. Al Furkan members have joined the ranks of al Qaeda and Islamic State. One Al Furkan member was arrested by Turkish authorities for planning an attack on U.S. soldiers at Incirlik Air Force base in Turkey. Igatha 48 Association and Al Furkan jointly constructed a town for Syrian refugees on the Syrian side of the Syrian-Turkish border.

Igatha 48 Association is also a member of the Turkish “Union of the Islamic World’s NGOs.” The union is a coalition of Islamic groups, several of which have been outlawed by the U.S. and Israel for their ties to Hamas. The Ad Kan report revealed that the union closely coordinates its activities with the Turkish regime.

Ahead of the first anniversary of the Arab Israeli riots in mixed Arab-Jewish cities during Operation Guardian of the Walls last May, the Israel Defense and Security Forum, (Habithonistim) published the results of a poll regarding public faith in law enforcement, and regarding Arab Israeli views of the state. During the Arab riots, Arab Israeli mobs carried out pogroms in Acre, Lod and other mixed cities. They lynched Jews, and torched Jewish homes, cars, synagogues and businesses. Among the poll’s many alarming findings, it found that 75 percent of Arab Israelis reject Israel’s right to exist.

In light of the data, and in this combustible atmosphere, Ra’am’s efforts to use the international community on the one hand, and its ability to bring the government down on the other, to coerce Israel into abrogating its sovereignty over the Temple Mount must be seen as a continuation by other means of last year’s Arab Israeli mob violence.

Abbas’s initial meeting with Abdullah last November exposed Ra’am claim that it is simply interested in improving the living conditions of Arab Israelis as a bold-faced lie. And now, Ra’am is using its political power and international position to endanger Israel’s ties with the U.S. and its regional partners, and to imperil its sovereignty over Jerusalem.

Ra’am’s participation in the Abu Akleh blood libel then should come as no surprise. Today Israel’s government owes its survival to a hostile, anti-Semitic actor, actively working towards its destruction.