What is Israel's predicament? It is this: It is surrounded on nearly all sides by enemies who are aggressively committed to its destruction. And too many people who call themselves its friends are only ambivalently committed to its security.

Consider the month that Israel has just had:

• On Aug. 18, eight Israelis were killed in a sophisticated cross-border ambush near the frontier with Egypt.

• From Aug. 18-24, some 200 large-caliber, factory-made rockets and mortars were fired at Israel from Gaza.

• On Sept. 1, the head of Iran's atomic energy agency announced that it was moving the bulk of its enrichment facilities to a heavily fortified site near the city of Qom.

• On Sept. 2, the United Nations released a report on the May 2010 Turkish flotilla incident, which defended Israel's right to enforce a naval blockade on Gaza and noted that Israeli commandos faced "organized and violent resistance." The Turkish government responded by yanking its ambassador from Tel Aviv and expelling Israel's from Ankara.

• On Sept. 4, the U.S. made a final appeal to the Palestinian Authority to drop its bid to seek statehood recognition at the U.N., a bid that sends to the rubbish bin decades of international agreements that a Palestinian state can be established only on the basis of negotiations. The PA rebuffed the American entreaties.

• On Sept. 9, thousands of hooligans stormed and nearly sacked the Israeli embassy in Cairo. Israel evacuated nearly its entire diplomatic mission from Egypt the following morning. 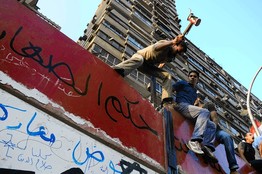 One other item: On Sept. 5, an organization called NGO Monitor reported that an associate director of the New Israel Fund, cited in a February 2011 State Department cable released by Wikileaks, said that "the disappearance of a Jewish state would not be the tragedy that Israelis fear since it would become more democratic." The NIF describes itself as a group "dedicated to a vision of Israel as both the Jewish homeland and a shared society at peace with itself and its neighbors."

Maybe the case of the (now former) NIF official is a relatively rare one. Or maybe it's just rare to have such off-the-record candor find its way into the public domain.

Not rare, however, is the idea that Israel's legitimacy is a function of its moral performance, and that judgment of its performance lies in the hands of its foreign critics and their designated Israeli scolds. Should the legitimacy of Pakistan or Zimbabwe be called into doubt on account of the wretched mess they have made of their existence as self-governing states? Nobody says this. Nor do many people say that the Palestinian Authority—half of which is ruled by a terrorist group and the other half by a president whose elected term in office expired more than two years ago—hasn't quite earned the moral right to statehood.

Only Israel is on perpetual trial. Only Israel, by way of this or that policy, is routinely held to moral account for the terrorist outrages committed against it. Only the Jews, as Eric Hoffer put it in 1968, are expected to be "the only real Christians in the world."

But then the argument is made that Israel is occupying somebody else's country. And risking its own future as a Jewish democracy, on account of well-known demographic trends. And all of this is corrosive, so it is often said, to Israel's soul.

Yet the purported concern for Israel's soul would be more convincing if it were joined by some decent respect for Israel's mind. Israel today labors under the invidious stereotype that it is too clever to blunder militarily or politically—and therefore that any such blunders are, in fact, acts of malice aforethought. But Israel also labors under the stereotype that it is too stupid or shortsighted to recognize its own strategic interest in coming to terms with a Palestinian state.

Will it some day dawn on Israel's so-called friends that 18 years of abortive efforts to come to terms with the Palestinians—the spurned statehood offers in 2000 and 2008, the withdrawal of the settlers from Gaza in 2005, the experience of what a "liberated" Gaza soon became—has soured Israelis on the idea of a Palestinian state? Or that the long-term demographic threat is worth risking in the face of the immediate threats of a near-nuclear Iran, a newly hostile Egypt, and a still-irredentist Palestinian leadership? Or that a professed commitment to Israeli democracy means, among other things, some regard to the conclusions Israelis have drawn about the prospects of peace by way of their electoral choices?

No democracy in the world today lies under a darker shadow of existential dread than Israel. And the events of the past month ought to demonstrate that Israel's dread is not of shadows only. Israel's efforts to allay the enmity of its enemies or mollify the scorn of its critics have failed. But is it too much to ask its friends for support—this time, for once, without cavil or reservation?

Copyright - Original materials copyright (c) by the authors.
Posted by Sally Zahav at 4:24 AM