A Sistah Souljah moment this was not, and yet the left went bonkers over it.


A Sistah Soulja moment this was not.

Obviously seeing a train wreck in the Democrats' future, as well as stuck endorsing it whatever it might be, President Obama cautioned Democrats to not try to tear down society in revolutionary fervor, because America's just not ready for it.


FORMER PRESIDENT BARACK OBAMA: My point is that even as we push the envelope and we are bold in our vision, we also have to be rooted in reality and the fact that voters, including Democratic voters and certainly persuadable independents or even moderate Republicans, are not driven by the same views that are reflected on certain, you know, left-leaning Twitter feeds or the activist wing of our party.

This is still a country that is less revolutionary than it is interested in improvement. They like seeing things improved. But the average American doesn't think that we have to completely tear down the system and remake it. And I think it's important for us not to lose sight of that.

Didn't matter, the rabid left treated it as a Sistah Souljah repudiation and decided to bite back.

It was a rather unexpected response to The Won, who, up until now has been untouchable, But now he is and they mercilessly mocked him as if he were a right-winger.

Yet it's not as if Obama were actually blasting these radicals.

Based on his speech, notice that he never says that the far-left ideas in question themselves stink to high heaven. It's not that socialism fails every time you try it. The only people he blames for this state of affairs is American voters. Americans just aren't quite progressive enough. They're not up for being "transformed," as Obama used to say.

Obama counseled the leftists in his room that since Americans fall short, they need to start couching their radical plans as "improvements" in their "narratives."

In the interest of winning (and making that coveted Obama presidential endorsement actually worth something) Obama has now "transformed" himself into Mister Moderate. It's not just laughable in itself, it's also too little, too late. Toothpaste's out of the tube. The Dems are now welded to their radical far left plans and it would be very hard for any of them to do U-turns now. For Bernie Sanders, of course, that's congenitally impossible.

It didn't go over well.

And better still, the rabid left is now mocking Obama to high heaven.

Here's what far-left Common Dreams had to say, first explaining out how it looks to leftists, and then curating its favorite tweets on Twitter:


After it was reported Friday that former U.S. President Barack Obama told a room full of "wealthy liberal" Democratic Party donors that voters ultimately won't go for candidates offering political visions he suggested were too ambitious and radical, progressives online reacted critically to Obama advising the party to sideline "certain left-leaning twitter feeds" and what he termed the "the activist wing of our party."


On Saturday, the hashtag #TooFarLeft was trending on Twitter.
Political operative Peter Daou, who took credit for launching the hashtag, said: "I launched the #TooFarLeft tag because I've had it with Republicans, media elites, and corporate Dems enabling fascists while denigrating those who seek economic and social justice as 'too far left.' I'd like to ONCE hear them complain America is too far right."
And so, a brief sample of reactions:

I launched the #TooFarLeft tag because I've had it with Republicans, media elites, and corporate Dems enabling fascists while denigrating those who seek economic and social justice as "too far left."

I'd like to ONCE hear them complain America is too far right. 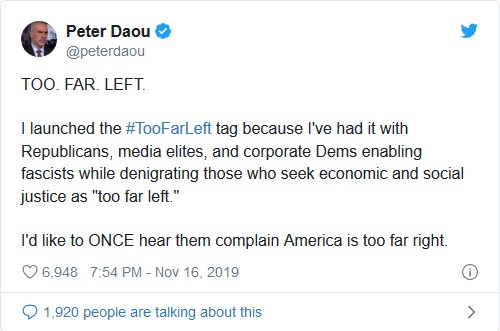 A bitter, touchy, sensitive bunch, aren't they? Winning elections isn't a thing for them, just proving one's far-left bonafides to the other lefties is what matters.

Daily Caller picked out another passel of choice tweets from the radicals angry at Obama, such as this:


Democratic Rep. Ilhan Omar of Minnesota, for instance, told her Twitter followers Saturday that “if being #TooFarLeft means” believing “healthcare is a human right”and “all student debt should be canceled,” then “count me in.” Climate change activists also weighed in.

Oh goody. Now she'll have to reassure her voters once again that she "loves" Obama. It happened once before. Something says that's not happening, not now with this pile-on.

What it shows is that any bid to even delicately steer the left in a winnable direction gets met with brickbats from the fanatics. They'll actually go against Obama himself, which up until now has been unheard of. No wonder Obama has always been afraid of them, afraid to go Sistah Souljah, except in the face of a certain train wreck. Yet if he wants results, the only way to get their attention is to launch a full-on attack of them, which he won't do. Any tiptoe delicate criticism blaming American voters is as good as it gets. Now even that has led to this reviling. It's pathetic, given that Obama has no other fans to look to.