Bravo to The Washington Times' national security correspondent Eli Lake for his exposé of J Street over the weekend. The so-called "pro-Israel" organization is bursting with overripe scandals about the identity of its contributors, its decision-making process, conflicting policies on Iran sanctions, ties to pro-Iranian and Arab American organizations, and more. But many reporters have been reluctant to shine a spotlight on them, fearful of running afoul of the White House for whom J Street proudly serves as Obama’s “blocking back” or the extreme "Journolist" guild of "progressive" reporters and bloggers in Washington who promote J Street and attack its critics. [See Journolists in the Service of J Street]

When J Street president Jeremy Ben-Ami went to temple on Yom Kippur I hope he concentrated on the verse, "Forgive us for the sins we committed by fraud and falsehood.” Since J Street’s founding, Ben-Ami repeatedly and boldly lied about his organization’s dependence on the super-critic of Israel, George Soros. Lake revealed that J Street’s U.S. tax records prove that Soros and his family are major contributors. 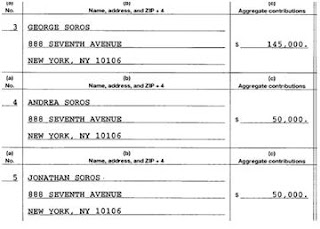 Despite all of J Street’s denials, it’s clear that J Street follows the “Golden Rule – he with the gold rules.” J Street’s policies strive to actualize Soros’ 2007 manifesto “On Israel, America and AIPAC” that appeared in the New York Review of Books. Soros’ influence on J Street goes a long way in explaining J Street’s very existence, its frequent criticism of Israel, its refusal to condemn the Goldstone report, its flirtation with Hamas and Iran, its refusal to support Israel’s anti-Hamas Gaza operation, and its active opposition to established American Jewish organizations.

The IRS tax returns also showed that J Street paid its own vice president Jim Gerstein $61,000 for “consulting” services by the Gerstein-Agne company. Elsewhere, J Street listed $46,000 for polling expenses, presumably to Gerstein’s own polling firm which has published several polls for Ben-Ami’s lobby. Whether the polling fees were part of the consulting fees is irrelevant. The “business transactions involving interested persons,” to use the IRS phrase, is a questionable corporate practice by a supposedly not-for-profit organization. It also totally destroys the credibility of J Street’s self-serving polls which it uses to justify its policies.

et never before publicized. For good reason. The fifth listed is Mort Halperin [pictured right], a veteran Washington foreign policy hand who also serves as Senior Advisor at Soros’ Open Society Institute. In October 2009, at the height of congressional condemnation of the anti-Israel Goldstone report, Judge Goldstone sent a letter to members of Congress defending his criticism of Israel. One enterprising reporter, Michael Goldfarb checked the document’s “properties” and discovered the real author: Mort Halperin.

Beyond the Soros contributions to J Street, equally troubling is a huge $811,697 contribution from a “Consolacion Esdicul” from Hong Kong. It appears that

Consolacion is “Connie” Esdicul, who Google reveals as a member of the Hong Kong Rotary Club and lives in the Happy Valley section of Hong Kong. But little is known about the woman. J Street claims that she was solicited by Bill Benter, “a prominent J Street supporter from Pittsburgh.” Actually, Benter, who is not Jewish, is considered the world’s most successful bettor on horse races, and he hangs out at the Happy Valley horse track in Hong Kong. Racing sheets report that Benter places $250,000 bets on a race. According to Wired.com, “Nobody's more skilled at masking bets than Bill Benter, regarded by many of his peers as the most successful sports bettor in the world.”

Esdicul’s contribution is a strange number unlike all the others which are rounded off to three zeroes. The figure may make sense, however, if it were a foreign currency conversion. What currency does $811,697 equal? Until J Street fesses up, we can only speculate. Using today’s conversion rates, Esdicul’s contribution equals 6,298,308 Hong Kong dollars, or 606,491 Euros, or 517,388 British pounds or 3,044,756 Saudi riyals.

Why would a Hong Kong individual contribute as much as one-half of J Street’s budget? Actually, Esdicul’s contribution is in line with J Street’s corrupt practices of taking money for its political action committee from decidedly non-pro-Israel sources: pro-Saudi activists, Arab-American leaders, Muslim activists, State Department Arabists, a Palestinian billionaire, and even a Turkish American who helped produce the anti-American and anti-Semitic film, Valley of the Wolves. According to the U.S. Federal Election Commission, the largest contribution to J Street’s Political A

ction Committee is $36,000 from a Latin teacher from Teton Village, Wyoming named Bob Morris. How do you say “strange” in Latin? [Pictured, left, Jeremy Ben-Ami with the president of the Arab-American Institute, Jim Zogby.]

With such contributions, it’s easy to understand how J Street’s operation on Capitol Hill grew exponentially in the last 12 months. According to lobbying records on file at the Clerk of the House of Representatives and the Secretary of the Senate, J Street’s lobbying budget went from under $5,000 in the first quarter of 2009 with one registered lobbyist to $130,000 in the first quarter of 2010, when J Street registered six lobbyists.

The $811,687 contribution from Hong Kong should raise the question whether under federal law the lobbyists need to register as foreign agents, and not domestic lobbyists.

Now we know who pays for J Street’s advertisements, and running ads or hiring lobbyists to influence American policy is an action that could require foreign agent registration.

In recent months J Street endorsed several dozen candidates for congressional elections in November, and its political action committee has distributed hundreds of thousands of dollars to its favorite candidates. How many of the endorsees and candidates will rush to reject the J Street favors now that the organization emerged as a Soros and foreign front?

Give J Street credit though: they did succeed in identifying a leftist constituency looking for a voice in Washington. But The Washington Times exposé is so devastating to J Street’s credibility and standing in Washington that it’s time to look beyond J Street. Today, that constituency needs a new champion, one free of intrigues, lies, and corporate corruption.