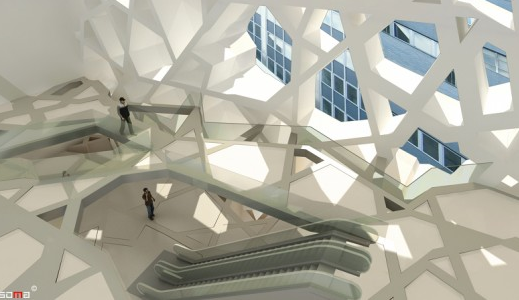 The Islamic supremacists get more bold and naked in their motive. They have released the architectural renderings of the tumbling Star of Davids here. But back in May, it was reported that the morphing mosque had a different architectural plan.

The plan calls for a 15-story building, including two levels below ground. There is no architect. Instead, the builders plan to hold a "world-class design competition."

What happened to the worldwide competition and how did we get the crashing Stars of David?

soma architects is a multi-diciplinary [sic] office for architecture, design, film and art. based in new york city, it was founded by Michel Abboud (here)

Wait, it gets better, I mean worse. Just as it is an Islamic pattern to build triumphal mosques on the cherished sites of conquered lands, it is an Islamic mandate for non-Muslims to pay the jizya, an exorbitant tax on non-Muslims living in Muslim lands. Islam requires people of other faiths to pay money to support the Muslim religion. And here it is no different.

The NY Times has this:

Mr. Gamal is counting on the center’s eventually having about 4,330 paying members, about half of them paying $2,700 a year for the most expensive family plan, which would include use of a planned fitness center and pool.

Most of that core group, Mr. Gamal expects, would be non-Muslim neighborhood residents and commuters.

Muslims from around the region would make up a larger but less frequently visiting group — what he calls the “dinner and a date” crowd — many of them choosing the cheapest $375 family membership for cultural programs.

But that's not all. Financing to build this mega mosque will come from the sharia -- Islamic bonds, aka sukuk, and the American taxpayer (more jizya):

Most of the financing, Mr. Gamal said on Wednesday, would come through religiously sanctioned bondlike investments known as sukuk, devised in Muslim nations to allow religious Muslims to take part in the global economy and increasingly explored by American banks. Sukuk and other Islamic banking instruments are tracked on the Dow Jones Islamic Market Index.

In sukuk construction projects, the investors own the real estate asset, and the developers lease it back; the investors’ profit on the rent is analogous to the yield on a bond. Some Islamic scholars do not accept the system, but it is widely used in places like Malaysia and Dubai.

Mr. Gamal, a broker and property manager with Soho Properties, uses conventional mortgages on other deals, but said using sukuk would attract a broader range of Muslim investors.

He expects to fund this triumphal mosque with taxpayer dollars.

He restated his hope of getting the bonds issued tax-free through a public development authority, but said he would do so privately — which would require higher payments to investors — if that was not possible. Besides individual investors, Mr. Gamal said he would court corporations interested in tapping Muslim-American markets, foundations that finance international development, and Jewish, Christian and Muslim philanthropists.

Fight the this monster. Join Robert Spencer and me at Temple University October 7th here and advance the opposition. And don't forget to protest thug developer Sharif El-Gamal's appearance at the Muslim Brotherhood, Hamas-linked hatefest on October 9th in Arlington, Virginia.

Doing nothing is not an option.

UPDATE: Something needs pointing out here. Now the Gamal cabal is saying that most of the people in the area of the center will be non-muslim? Wait a minute. We were told that the Muslim community in lower Manhattan was bursting at the seams and had to have this huge place, right? But according Anne Barnard in today's NY Times piece, most of the people living or working near the center and wanting to use the facilities are not Muslim.