The suspension, part of a broader review of U.S. security assistance to Lebanon, offers a cautionary tale about the uncertain course of secular revolts sweeping the Middle East, and Washington's limited ability to influence them. Lebanon's Cedar Revolution of 2005 started with a wave of popular protests that stirred pro-democracy hopes in the West, much like the revolts now sweeping the region. But, to the chagrin of the U.S. and its allies, Hezbollah has emerged stronger rather than chastened. 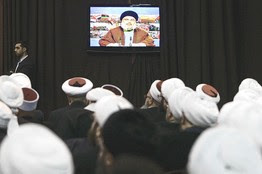 The arms freeze was recently approved by Defense Secretary Robert Gates, but the decision hasn't been publicly announced because of concerns the disclosure could interfere with delicate internal negotiations in Lebanon over a new government's makeup and policies.

Defense officials said the U.S. is continuing to provide training and nonlethal assistance to the Lebanese military, describing the ties that are active as "robust."

Since 2006, the U.S. has provided more than $720 million in support to the Lebanese military, including equipment and advanced training. Between March and October 2010 alone, this support included at least $18 million worth of military equipment and ammunition, including antitank missiles and launchers. Other shipments were in the pipeline for late last year and earlier this year but it is unclear what was delivered.

A senior defense official said the Pentagon is now reviewing all U.S. security assistance to the Lebanese Armed Forces "during this period of government formation." A second U.S. official said the administration would base future decisions about security assistance, including whether to renew deliveries of lethal arms, after assessing the composition and conduct of the next government.

U.S. lawmakers had moved to block aid to the Lebanese army in August after a deadly border clash between Israeli and Lebanese units, but the congressional freeze was only temporary. Congressional aides said new legislation is likely to be introduced in the coming weeks to cut off assistance if the next Lebanese government is dominated by Hezbollah.

Hezbollah, a Shiite political and military group shunned by the U.S. as a terrorist organization, has been Israel's main foe in south Lebanon. It is backed by Syria and Iran.

Lebanon went through a popular revolt in 2005 following the assassination of former Lebanese Prime Minister Rafik Hariri, whose son, Saad Hariri, later became premier. The car bombing was a pivotal event in Lebanon and led to the end of Syria's 30-year military occupation of the country.

But early U.S. optimism about the prospect for change "fizzled out," one senior U.S. official said, and Hezbollah has steadily expanded its reach in the country and beyond, sounding alarm bells in the U.S. and Israel.

The selection in January of a Hezbollah-backed billionaire businessman, Najib Mikati, as the new prime minister, confirmed the movement's position as the most powerful military and political force in Lebanon. Mr. Mikati takes over for Saad Hariri, who enjoyed Western backing as premier.

Washington's limited ability to influence events in Lebanon spotlights potential pitfalls of the changes sweeping the region. As countries such as Tunisia and Egypt grapple with the realities of building new political institutions after years of autocracy, officials worry whether any popularly elected governments that emerge will be able to align themselves as closely with Washington's interests.

Officials with Lebanon's embassy in Washington had no immediate comment.

In talks with their U.S. counterparts, Israeli officials pushed to suspend arms transfers to Lebanon "out of fear that [arms] would end up in the wrong hands and eventually be used against us," an Israeli official said.

According to new Israeli intelligence estimates, Hezbollah has built as many as 550 bunkers in southern Lebanon, including 100 storage units holding rockets and missiles. Hezbollah has an estimated 40,000 to 60,000 rockets, far more than during the 2006 Lebanon war, Israeli officials say.

In recent weeks, Hezbollah has sought to inject itself into the popular revolutions now sweeping the Arab world. The group has thrown its support behind protests by fellow Shi'ite demonstrators in Bahrain and has criticized Arab states for backing Bahrain's rulers while supporting the rebels in Libya.