Should Israelis and pro-Israel Americans take President Obama at his word when he says—as he did at the American Israel Public Affairs Committee policy conference in Washington, D.C., on Sunday—"I have Israel's back"?

Here is a president who fought tooth-and-nail against the very sanctions on Iran for which he now seeks to reap political credit. He inherited from the Bush administration the security assistance to Israel he now advertises as proof of his "unprecedented" commitment to the Jewish state. His defense secretary has repeatedly cast doubt on the efficacy of a U.S. military option against Iran even as the president insists it remains "on the table." His top national security advisers keep warning Israel not to attack Iran even as he claims not to "presume to tell [Israeli leaders] what is best for them."

Oh, and his secretary of state answers a question from a Tunisian student about U.S. politicians courting the "Zionist lobbies" by saying that "a lot of things are said in political campaigns that should not bear a lot of attention." It seems it didn't occur to her to challenge the premise of the question.

Still, if you're looking for evidence of Mr. Obama's disingenuousness when it comes to Israel, it's worth referring to what his supporters say about him.

Consider Peter Beinart, the one-time Iraq War advocate who has reinvented himself as a liberal scourge of present-day Israel and mainstream Zionism. Mr. Beinart has a book coming out next month called "The Crisis of Zionism." Chapter five, on "The Jewish President," fully justifies the cover price.

Mr. Beinart's case is that Mr. Obama came to his views about Israel not so much from people like his friend Rashid Khalidi or his pastor Jeremiah Wright. Instead, says Mr. Beinart, Mr. Obama got his education about Israel from a coterie of far-left Chicago Jews who "bred in Obama a specific, and subversive, vision of American Jewish identity and of the Jewish state."

At the center of this coterie, Mr. Beinart explains, was a Chicago rabbi named Arnold Jacob Wolf. In 1969, Wolf staged a synagogue protest in favor of Black Panther Bobby Seale. In the early 1970s, he founded an organization that met with Yasser Arafat's Palestine Liberation Organization—this being some 20 years before Arafat officially renounced terrorism. In the early 1990s, Wolf denounced the construction of the Holocaust Museum in Washington.

And, in 1996, the rabbi "was one of [Mr. Obama's] earliest and most prominent supporters" when he ran for the Illinois state Senate. Wolf later described Mr. Obama's views on Israel as "on the line of Peace Now"—an organization with a long history of blaming Israel for the Arab-Israeli conflict. 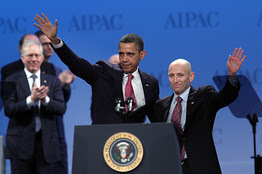 President Obama with AIPAC President Lee Rosenberg at the AIPAC conference in Washington, D.C., on Sunday.

Mr. Obama had other Jewish mentors, too, according to Mr. Beinart. One was Bettylu Saltzman, whose father, developer Philip Klutznick, had joined Wolf in "his break with the Israeli government in the 1970s." Ms. Saltzman, writes Mr. Beinart, "still seethes with hostility toward the mainstream Jewish groups" and later became active in left-wing Jewish political groups like J Street. Among other things, it was she who "organized the rally against the Iraq War where Obama proclaimed his opposition to an American invasion."

Ms. Saltzman also introduced Mr. Obama to David Axelrod, himself a longtime donor to a group called the New Israel Fund. For a flavor of the NIF's world view, a WikiLeaks cable from 2010 noted that an NIF associate director told U.S. embassy officials in Tel Aviv that "the disappearance of a Jewish state would not be the tragedy that Israelis fear since it would become more democratic."

Other things that we learn about Mr. Obama's intellectual pedigree from Mr. Beinart: As a student at Columbia, he honed his interests in colonialism by studying with the late pro-Palestinian agit-Prof. Edward Said. In 2004, Mr. Obama "criticized the barrier built to separate Israel and its major settlements from the rest of the West Bank"—the "barrier" meaning the security fence that all-but eliminated the wave of suicide bombings that took 1,000 lives in Israel.

We also learn that, according to one of Mr. Beinart's sources, longtime diplomat Dennis Ross was brought aboard the Obama campaign as part of what Mr. Beinart calls "Obama's inoculation strategy" to mollify Jewish voters apprehensive about the sincerity of his commitments to Israel. Not surprisingly, Mr. Ross was a marginal figure in the administration before leaving last year.

In Mr. Beinart's telling, all this is evidence that Mr. Obama is in tune with the authentic views of the American Jewish community when it comes to Israel, but that he's out of step with Jewish organizational leadership. Maybe. Still, one wonders why organizations more in tune with those "real" views rarely seem to find much of a base.

But the important question here isn't about American-Jewish attitudes toward Israel. It's about the president's honesty. Is he being truthful when he represents himself as a mainstream friend of Israel—or is he just holding his tongue and biding his time? On the evidence of Mr. Beinart's sympathetic book, Mr. Obama's speech at Aipac was one long exercise in political cynicism.