Neglected by municipal authorities for decades, the encroachment and damage may be irreversible. 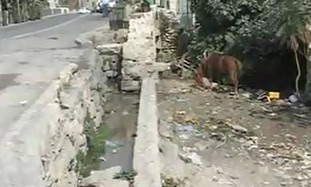 Bowing to pressure from Prime Minister Binyamin Netanyahu, the US State Department and the international community, Jerusalem Mayor Nir Barkat has cut back on plans to remove 88 illegal Arab buildings from a rich archeological park in the Kidron Valley adjacent to the City of David, the ancient city of Jerusalem.

According to municipal plans, Barkat proposed relocating only about 20 families in the disputed area, while retroactively awarding legal status to the rest. The entire area would renovated and restored as a garden and world-class tourist site, with an Arab residential neighborhood including shops and restaurants, sports and health care centers. Arabs claim that these plans threaten their property and their way of life.

The city claims it will improve the quality of life. Arabs are opposed, saying it is “Judaizing” the area. The city contends that Arabs have built on public land in an archeological area and it is enforcing “the rule of law”; Arabs decry the lack of building permits.

According to the Jerusalem Municipality, there are an estimated 30,000 illegal Arab buildings in east Jerusalem alone. The municipality is in the process of providing them with infrastructure and legalizing them retroactively.

Some Arabs claim they own the land, but are unable to provide proof.

Assisted by a number of Israeli NGOs, like Peace Now, Ir Amim and Bimkom – recipients of funds from the New Israel Fund, European governments and the EU – they have protested archeological work in the area, insisting that the entire area is “Palestinian.”

Aerial photographs show that the area was sparsely inhabited until the early 1990s, when archeological excavations in the City of David began to attract millions of tourists, and artifacts could be found scattered throughout the area. Under Mayor Barkat’s predecessors Ehud Olmert and Uri Lupolianski, Arabs built extensively throughout the area, without interference.

The King’s Garden, or Al Bustan (“The Garden” in Arabic), a reference to biblical times when it was a source of spices used in perfumes and incense, is located just below the City of David, where the Kidron and Hinnom Valleys meet. Water flowed to this area from the Gihon Spring, the ancient city’s sole water source, mentioned in Kings I, 1:39, where King Solomon was anointed.

The prophet Isaiah called this “ ...the waters of Shiloah that flow softly” (8:6), which were channeled into a pool, then into the King’s Garden, and from there down the Kidron Valley into the Judean Desert. During King Hezekiah’s reign (727-698 BCE), a tunnel was cut from the Gihon Spring, through the mountain, beneath the city, to bring water into the city. (II Kings 20). The King’s Garden is mentioned as the escape route for King Zedekiah (Jeremiah 39:4); in Nehemiah (2:14); in the Song of Songs (4:15); in Ecclesiastes (2:5) and many other biblical and talmudic sources.

The modern Arab village of Silwan (an Arabized version of the Hebrew, Shiloah) is located in and around what was the ancient Jewish cemetery of the Mount of Olives, on the eastern side of the Kidron Valley, opposite the City of David.

Across from the Gihon Spring is the tomb of Rabbi Ovadiah ben-Avraham, from Bartinoro, Italy, known as “the Bartenura,” who died in Jerusalem around 1500. He traveled extensively in the Land of Israel, describing Jewish communities in Bethlehem, Hebron and Gaza, wrote a famous commentary on the Mishna, and was the spiritual and communal leader of Jews in Jerusalem, many of whom had escaped the expulsion from Spain in 1492.

A few hundred meters north in the Kidron Valley, at the foot of the Mount of Olives cemetery, are monumental tombs from the Second Temple Period. This is called the Valley of Jehoshaphat (God has judged) where, according to Joel 4, 2 and 12, in both Jewish and Christian tradition, the nations of the world will be judged.

Neglected by municipal authorities for decades, the encroachment and damage may be irreversible. Mayor Barkat’s solution is not ideal, but at least it is an attempt to deal with the problem seriously. No doubt he cares, but, having inherited a very difficult situation, and restricted by politicians, he seems to be making the best out of a bad deal.
Moshe Dann is a PhD historian, writer and journalist.