Islamist Watch, a project of the Middle East Forum, defends the freedoms and liberties of Western society against "stealth jihad," a campaign by Islamists to slowly and methodically implement a Sharia-compliant theocracy in the West. Sharia is Islamic law, based on the Koran and the teachings and personal actions of Mohammad (known as The Sunnah, noted and reported in Hadiths).

Below, very personal examples of life under Sharia in Islamist societies. The intolerance, the brutality, the inhumanity. The extreme lack of religious pluralism, women's rights, free speech and equality under the law.

A Sudanese woman is lashed by uniformed policemen at a Khartoum police station. The crowd of men gathered around laugh at the process. Following the spectacle is an interview with Khartoum Governor Dr. Abd Al-Rahman Al-Khadhr, which aired on Blue Nile TV on December 12, 2010.

Under Sharia law in Sudan, it is illegal for women to wear pants in public. The penalty: 40 lashes.

Gov. Abd Al-Rahman Al-Khadr: What was aired was the implementation of an Islamic punishment. … We should consider the more important issue in this case – our penal code is in keeping with Islam, and the Shari'a is the main source of our legislation. Islamic punishments are carried out to purge the perpetrator.

INTERVIEWER: This is not a case of a woman wearing pants, is it?

Gov. Abd Al-Rahman Al-Khadr: No, it is not. I did not mention the nature of the crime, because I do not want to slander her. It has to do with immoral activity and prostitution.

A woman caught the attention of Saudi Arabia's feared Sharia Police at an upscale shopping mall in Riyadh. Contrary to the strictly enforced Sharia law, she was wearing lipstick, nail polish, and a few strands of hair were visible under her veil. The agency that zealously enforces Sharia law in Saudi Arabia is called the Commission for the Promotion of Virtue and the Prevention of Vice.

This very brave woman stunned the Sharia Police – who are used to absolute obedience – by putting up a public protest and recording the incident with her camera phone. The State Police were eventually called in. It is not known what eventually happened to this woman, who lives in a closed society with no civil liberties. Since the video was posted on YouTube, it is reasonable to assume she survived – at least for the short-term.

Woman: None of your business! I'm free to put on nail polish if I want to. … I'm not getting out! What are you gonna do about it? … You are not the boss of me, and you can't tell me not to wear nail polish!

The woman is ruthlessly killed in a slow form of execution by having stones thrown at her again and again. Her "crime": allegedly being seen out with a man.

Below, ABC News shows a heavily edited and sanitized version of the video in a Sept 24, 2010 report by Brian Ross:

Below, an unedited version, as originally shown by Al-Aan TV in Dubai:

World famous concert pianist Fazil Say is considering never returning to his native Turkey after a Turkish court accepted an indictment against him for allegations of insulting Islam. After decades of secular rule, Turkey has recently fallen to the forces of Islamism. Say's offense? A tweet:

The openly atheist Say wrote a tweet mocking the muezzin, a person who leads the call to prayer in a mosque. "The muezzin finished the azan in 22 seconds. What's the rush? A lover? A raki table?" he asked. He also retweeted a verse attributed to the 11th-century poet Omar Khayyám: "You say rivers of wine flow in heaven, is heaven a tavern for you? You say two houris (beautiful young virgin women) await each believer there, is heaven a brothel to you?"

Say is known for his electric performances of Beethoven. Great art that will never be heard where Sharia reigns.

A Kuwaiti man was sentenced to 10 years in prison for allegedly sending "disparaging" tweets about the Prophet Mohammad. Hamad al-Naqi was found guilty of "endangering state security" – whatever that means.

Mr. al-Naqi is actually lucky. Shortly after being arrested for his "crime," Kuwait's parliament approved a law imposing the death penalty on any Muslim who insults God, his prophets, messengers, Prophet Mohammad's wives or the Koran, in any form of expression, if they don't repent.

Iranian President Mahmoud Ahmadinejad infamously told an audience at Columbia University that there are no homosexuals in Iran. If that's true, it's because they are being murdered under Sharia law.

Four Iranian gay men are due to be executed for sodomy under their nation's Sharia law, according to recent stories in the Huffington Post and Jerusalem Post. The four men -- identified by the Human Rights Activist News Agency in Iran as Saadat Arefi, Vahid Akbari, Javid Akbari and Houshmand Akbari -- are set to be hanged after their guilty verdicts were approved recently by "high court" judges.

A recent study found homosexuals in Iran are comprehensively and systematically brutalized by the Islamist regime, which exposes them to horrific punishment, bullying and risk of suicide. The first detailed report on Iran's homosexual community has found that its members live under social and state repression, with some being persecuted, forced into exile or even sentenced to death.

A series of photos from 2005 shows the hanging of two terrified teenage Iranian boys, allegedly for their "crime" of homosexuality. The photos are of Mahmoud Asgari, 16, and Ayaz Marhoni, 18. 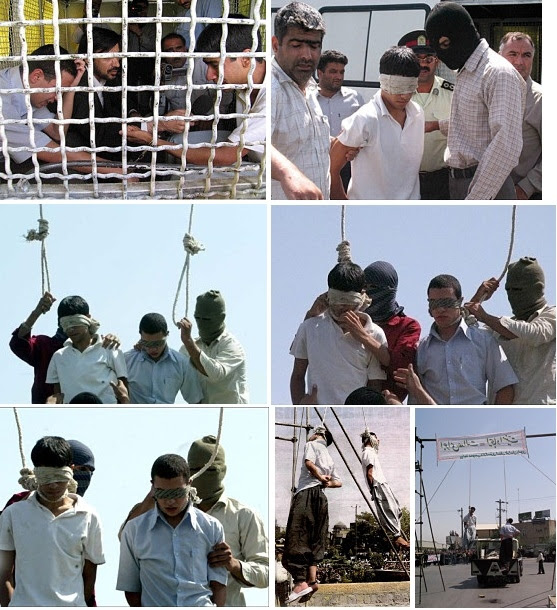 The Washington Post reported on the controversy surrounding the photos and the difficulty in verifying the "crimes" of these two teenagers in the closed, totalitarian Islamist society of Iran.

The following is footage of an Islamist demonstration held in Tunisia in response to statements made by an unnamed Tunisian expat deemed heretical to Islam. The footage aired on the Al-Jazeera network on June 8, 2012. Translated by Memri.

Tunisian cleric Mokhtar Jbeli: That man had the audacity to affront us and all that is sacred to us. He does not respect the Tunisian people. He must be punished. We demand that he be placed on trial and punished.

Interviewer: Even if he apologizes?

Mokhtar Jbeli: Anybody who affronts the Prophet Muhammad must be punished by death, even if he repents. The punishment for heresy must be imposed upon him. Even if he repents, he must be killed, because it is the decree of Allah.

Mokhtar Jbeli: Islam will be victorious, whether the atheists, the infidels, the secular, and their ilk like it or not.

Tunisian cleric Shihab Al-Din Tleish: Let everybody know that for the sake of the Prophet Muhammad, we are willing to sacrifice our fathers, our mothers, and ourselves. We will be slaughtered for your sake, oh Messenger of Allah. We will not allow the Messenger of Allah to be cursed.

According to the Encyclopaedia of Islam, the most authoritative reference work on Islam in the English language, "there is unanimity that the male apostate must be put to death."

WARNING: The video below of a brutal beheading is EXTREMELY GRAPHIC. It is highly recommended that you do not view. It is posted here only to serve as an historical witness to the brutality of Sharia law – the barbarity of Islamist societies can not be denied. For those who prefer not to view it, a full textual summary can be found here.

The "crime": converting to Christianity and refusing to renounce it.

Liberal talk show host Tawfiq Okasha recently appeared on "Egypt Today," airing a video of Muslims slicing off a young man's head off for the crime of apostasy -- in this instance, the crime of converting to Christianity and refusing to renounce it.

A young man appears held down by masked men. His head is pulled back, with a knife to his throat. He does not struggle and appears resigned to his fate. Speaking in Arabic, the background speaker, or "narrator," chants a number of Muslim prayers and supplications, mostly condemning Christianity, which, because of the Trinity, is referred to as a polytheistic faith: "Let Allah be avenged on the polytheist apostate"; "Allah empower your religion, make it victorious against the polytheists"; "Allah, defeat the infidels at the hands of the Muslims," and "There is no god but Allah and Muhammad is his messenger."

Then, to cries of "Allahu Akbar!"— Allah is greater!"—the masked man holding the knife to the apostate's throat begins to slice away, severing the head completely after approximately one minute of graphic knife-carving, as the victim drowns in blood. Finally, the severed head is held aloft to more Islamic slogans of victory.

Copyright - Original materials copyright (c) by the authors.
Posted by Sally Zahav at 5:05 AM

Actually, the word Trinity is no where in the Bible. The Father, the Son, and the Holy Ghost are One. There is only one God. And I guarantee you, the One True God is not the one who these animals worship.