Note by Anna Mahjar-Barducci: Azawad is a new country in North Africa that just seceded from Mali. It borders Algeria and was declared independent by a Touareg movement, the National Movement for the Liberation of Azawad [MNLA], which is secular. Shortly after the MNLA declared independence of Azawad, Qatar, Algeria and Mali financed jihadist groups to fight against the Touaregs. The MNLA, however, killed the deputy commander of Al-Qaeda in the Islamic Maghreb

Azawad, a new nation, is in a war against countless terrorist organizations backed by Mali, Algeria, and Qatar. Today, Azawad wishes to make the same speech of the State of the Union made by George W. Bush on January 29, 2002. But as long as the U.S. and the free world do not support Azawad, it will be a mere wish while terrorism is spreading all over Africa.

The MNLA and Azawad and the National Movement for the Liberation of Azawad [MNLA] were attacked on June 27, 2012 by the AQIM (Al Qaeda in the Islamic Maghreb), MUJAO (Movement for Oneness and Jihad in West Africa), and Boko Haram. 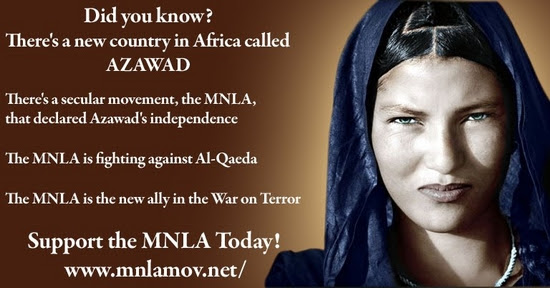 This aggression, in which two of the bravest officers of the MNLA were killed, created a state of the union between Azawadians that has never been stronger.

Azawadians and the MNLA are also confident that their dream cannot come true without the supports of the United States of America and its allies of the free world.

This dream will not come true without international support because terrorist organizations all over Africa designated the Sahel-Sahara region as their new playground, and will do whatever it takes to succeed and spread their evil activities all over Africa.

This dream will not come true without international support because these terrorists organizations are supported by at least three countries: Mali, Algeria, and Qatar -- while Azawad and the MNLA is rejected by the free world.

Azawadian and the MNLA strongly believe that one day "The Azawadian flag will fly again over every single official building in Azawad. Terrorists who once occupy Azawadian cities will occupy cells in Taoudenni. And terrorist leaders who urged followers to sacrifice their lives will be running for their own".

The Azawadians and the MNLA wish to also say: "Our nation will continue to be steadfast, and patient and persistent in the pursuit of two great objectives. First, we will shut down terrorist camps, disrupt terrorist plans and bring terrorists to justice. And second, we must prevent the terrorists and regimes who [support them] ... from threatening [Azawad] and the world."  But the Azawadians and the MNLA cannot say it without having allies in this war on terror and against the "axis of evil."

"As we gather tonight, our nation is at war, our economy is in recession and the civilized world faces unprecedented dangers. Yet the state of our union has never been stronger."

These two sentences could represent the current situation of Azawad where the National Movement for the Liberation of Azawad [MNLA] is fighting with almost empty arms against terrorist organizations backed by nations with the goal of erasing all traces of civilization.

However, these two sentences were made 10 years ago to represent the situation in the United States of America. They were not spoken by Azawadians but by President George W. Bush.

In that time, U.S. and the free world were attacked by Al Qaeda backed by some nations, called the "axis of evil."

The U.S. and the free world have to answer these questions. They have to do so quickly because the terrorists and the new "axis of evil" are not wasting time.

Published with the kind permission of Toumast Press.