Jerusalem Begins Campaign to out Iran, Hezbollah as Terrorists

Netanyahu takes case to US airwaves, conducting interviews in which he says it is clear beyond all doubt that Hezbollah, Iran behind Bulgaria terror attack; Liberman to lobby EU to put Hezbollah on terror blacklist. 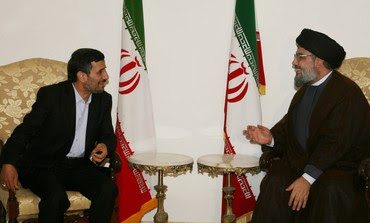 Israel launched a campaign Sunday to turn attention to Iran and Hezbollah's involvement in international terrorism, with Prime Minister Binyamin Netanyahu taking his case to the US public and Foreign Minister Avigdor Liberman announcing a trip to Brussels to convince the EU to put Hezbollah on its terror blacklist.

Netanyahu, appearing on two Sunday morning news programs – CBS's Face the Nation and Fox News Sunday – said it was clear beyond a doubt that Hezbollah was behind Wednesday's attack in Burgas that killed five Israelis and a Bulgarian bus driver.

"I know, based on absolutely rock solid intelligence, this is Hezbollah, and this is something Iran knows about very, very well," he said. Netanyahu added that Israel knows, without "a shred of doubt," that the operation was carried out "with the encouragement, at the behest and coordination of Iran."

The prime minister said the intelligence information was given to "friendly" intelligence agencies in the world.

Netanyahu said it was also easy to "surmise" Hezbollah's responsibility because a week before the attack, a man who admitted to being a Hezbollah operative was arrested in Cyprus preparing exactly the same kind of attack as the one carried out in Bulgaria.

"Exactly the same thing: going to an airport to collect information for an impending attack on Israel tourists who get off the plane and are about to board a bus," Netanyahu said. "So, exactly the same modus operandi was exposed in Cyprus. Fortunately there, the terrorist was caught, he admitted that he worked on behalf of Hezbollah, Iran’s long terror-arm."

Netanyahu said that Iran and Hezbollah have tried to carry out attacks over the last two years in 24 countries.

The prime minister termed this a "worldwide terror campaign directed at us but often including others. For example, there was an Iranian planned attack on the Saudi ambassador to the United States. They might have well taken away several senators with them, they don’t particularly care. Very brazen. How could Iran be doing this and getting away with murder, literally. It’s because nobody names and shames them."

Netanyahu said there are now five Iranians and two Hezbollah operatives in custody around the globe for alleged involvement in terrorist plots, and the time has come to "expose those who stand behind terror."

In addition to exposing Iran's involvement, Netanyahu said the world had to make sure that Iran pays for its involvement.

Netanyahu also drew a link, as he did last Thursday in Jerusalem, between the Bulgaria attack and Iran's pursuit of nuclear weapons.

He said the attacks on a busload of tourists, including killing a pregnant mother, "tells you what kind of people we’re dealing with. Now, imagine these people who are capable of doing anything, imagine them possessing nuclear weapons. People who gun down innocent people, who send suicide bombers, who could block the Straits of Iran, who threaten to annihilate Israel, who murder diplomats, who’ve taken over your embassy – you want these people to have atomic bombs? I think this is a reminder, this wave of terror attacks, that the world’s most dangerous regime must not be allowed to have the world’s most dangerous weapons."

Meanwhile, Liberman announced Sunday that he will travel to Brussels Monday for the annual EU-Israel Association meeting.

In the wake of the attack in Bulgaria and the attempted attack in Cyprus, both EU countries, Liberman is expected to ask his European colleagues to include Hezbollah on the EU's terrorist blacklist. Although the group is on the US terrorist list, the EU has so far refrained from including it on their list.

Liberman is expected to say that Hezbollah's responsibility for violence and lack of stability in the Middle East and the world obligates the EU to take action.