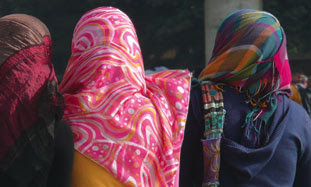 A Facebook campaign against the obligatory veiling of women in Iran continued to grow this week, attracting over 15,700 'likes' by Thursday - even as Iran's Cyber Police vowed increased crackdowns on the social network, and after morality police raided and closed Tehran coffee shops for serving improperly-covered women.

Liberal students from Iranian universities launched the Facebook campaign, called 'No to the Mandatory Hijab', two weeks ago. Since then, thousands of Iranians have 'liked' and commented on the Facebook page, which reads "Rules cannot force anyone to do anything, this includes all people and all women all over the world". The page asks Iranians to send in photographs that are then posted to Facebook with a banner that reads 'Unveil Women's Right to Unveil.'

The campaign has also generated enormous interest across the Persian-language cyberspace, with blogs, Twitter and Facebook discussing it.

While she has not sent her photograph to the Facebook campaign, Ayatollah Khomenei's granddaughter, Naimeh Eshraghi, also criticized the mandatory hijab this week.

Eshraghi, a petrochemical engineer, told the Jamaran news site that her grandfather had never actually decreed that Iranian women most cover their heads.

"I have a positive view on the hijab, and personally I like it," Eshraghi said. "However, I'm not really interested in the chador (the usually black, floor-length, full body covering, whose name means 'tent' in Persian), because it makes things hard for me and also, when a woman is dressed from head to toe in black it doesn't really make too pretty a sight."

Notably, another of Khomenei's granddaughters, Zahra Eshraghi, has also previously spoken out against the mandatory hijab.

Ironically, Iran was the first Muslim country to ban the veil. In 1936, Reza Shah Pahlavi - the father of Mohammed Reza Shah - banned the hijab and the chador, and ordered the police to arrest women who appeared in public wearing it.

Since the Islamic Revolution in 1979, however, the hijab has been compulsory for women in Iran.

However, over the years, many women have pushed the boundaries regarding head-coverings.

This month, the Iranian police launched a new campaign against 'un-Islamic' clothing and hairstyles. In a single July weekend, the Basij 'morality police' and regular officers raided and closed down over 50 Teheran cafes found to be serving improperly veiled women, ISNA reported.

(Such crackdowns are not uncommon - in January, the Iranian police launched a campaign against sellers of 'pernicious Western' Barbie dolls.)

Meanwhile, Iran's Cyber Police announced this week that it was cracking down - yet again - on Iranian use of the social network.

In an interview with the Iranian Students News Agency on Tuesday, Cyber Police chief Kamal Hadianfar said the authorities planned to take down sites on Facebook and elsewhere on the internet that promoted "prostitution and licentiousness".

"In 2010, Facebook was a free country for criminals, but thanks to Allah and the Cyber Police, over the past 15 months we have made great progress in cleansing social networks, especially Facebook," Hadianfar said.

The Cyber Police chief boasted that the authorities had already shut down a major Facebook page, Daf & Paf.

According to Reporters without Borders, in January the Cyber Police arrested four Iranians allegedly involved in setting up the Daf & Paf page which had 27,000 members and allowed Iranians to take part in an online beauty contest by uploading photographs of themselves.

Radio Zamaneh, a Persian-language news site based in Amsterdam and blacklisted by Iran's Intelligence Ministry, reported on Wednesday that several Iranian Facebook users have said their accounts have been hacked in the past few days.

Some Iranians, however, are fighting back against the crackdowns and against the Islamic dress code.

Since the police shut the Daf & Paf site down, Iranians created several 'protest' Facebook pages, one of which features a bareheaded woman in an off-the-shoulder dress with an above-the-knee hemline.

Meanwhile, the 'No to Obligatory Hijab' campaign has attracted support from men as well as women, including several prominent Iranian figures. On Thursday, writer Moniro Ravanipor - who formerly faced trial in Iran for taking part in the 2000 Berlin Conference - sent in her photograph. Also featured on Thursday was human rights activist Kourosh Sehati, who was arrested and detained for helping organize the July 1999 student uprisings, which led to street battles in downtown Teheran.