7 Years, 9,393 Rockets Since Disengagement from Gaza 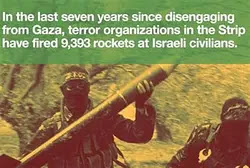 Today marks seven years and more than nine thousand deadly rocket attacks since nearly 10,000 Jews were ripped from their homes in Gaza.

In the time since the government of Israel officially withdrew from the region in the 2005 Disengagement from Gaza, Palestinian Authority Arab terror organizations have flourished there.

They have fired 9,393 rockets and missiles at Israeli civilians living on the other side of the border with Gaza.

In 2005, Israel expelled every Jewish family from every town in the Gush Katif region and from northern Samaria. Also withdrawn were all Israeli military forces.

In the 23 towns that had once supported vibrant communities, numerous well-equipped greenhouses were left to the Arab residents of Gaza, purchased for their new owners by generous donors who hoped they would provide a budding economy for a nascent new nation.

Instead, within hours PA Arab terrorists contemptuously trashed the buildings and built terrorist training camps upon the ruins of the towns in which they were located.

The ruins of the Jewish communities of Gaza today serve as launching pads for Arab terrorists to fire their deadly missiles at Jewish families living in southern Israel.

"Seven years ago today we disengaged from the Gaza Strip,” commented the IDF Spokesperson on Thursday in a Facebook post that featured a special poster depicting two Gaza terrorists preparing a missile to fire at Israel.