Palestinian with Explosives was Heading for Jerusalem 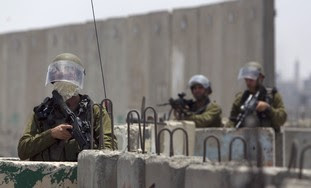 
A 19-year-old Palestinian man caught with eight pipe bombs at the Kalandiya check point was trying to get to Jerusalem, the IDF said Tuesday.

The man, believed to be from Nablus, got off a Palestinian bus carrying a large backpack, and tried to sneak past security checks for pedestrians at the checkpoint, which separates greater Jerusalem from the West Bank.

Lt.-Col. Yuval Shenkin, commander of the Military Police's Erez Brigade, which controls crossings in the area, said the incident was highly unusual. "To try to get this amount of explosives through is certainly exceptional," Shenkin said.

"Had he gotten past Kalandiya, he'd be in Jerusalem," he added.

After getting off the bus, the man walked around the pedestrian route, arousing soldiers' suspicions.

The soldiers told him to go back to the pedestrian line and undergo security checks. At that point, the man became even more suspicious, Shenkin added. "He said he was confused, and that he wanted to go back to the West Bank. At this stage, the soldiers understood something was going on. They placed his backpack through X-ray screening, and found eight pipe bombs," Shenkin said.

IDF sappers were called to the scene to deal with the explosives.

As soon as it became clear that the man was a security suspect, he was isolated in the bomb-proof terminal and separated from his backpack, Shenkin stressed. The suspect was transferred to the Israel Police for questioning.

Shenkin praised the alertness of soldiers for seizing the bombs. "They begin their shift at 4 a.m. Fifteen thousand Palestinians and thousands of vehicles pass through Kalandiya to go to Jerusalem. They prevented the bombs from getting through," the commander said.