Islamists Select a New Target, and a "See No Evil"
House Bill May Facilitate the Effort.


There's no question that I was approached by the Turkish American Coalition [properly the Turkish Coalition of America], who have a deep interest in Turkey and American Indians.

"Deep interest" indeed. The bill was the culmination of a curious multi-year effort by Turkey to ingratiate itself with Native American tribes: tribal students now study in Turkey with full scholarships; Turkish high officials regularly appear at Native American economic summits; and dozens of tribal leaders have gone to Turkey on lavish all-expense paid trips.

Why the intense interest in business and cultural ties with Native American tribes only now, when Turkish Prime Minister Recep Tayyip Erdogan and his Islamist Justice and Development party (AKP) have taken Turkey down a path of aggressive and dangerous Islamism?

Evidence from Uzbekistan points to a possible nefarious motive: Infiltration and Islamization. The government of Uzbekistan is claiming that private Turkish business interests in the Central Asian country have been acting as a front for banned Islamist extremists. According to Agence France-Presse:


[The Uzbek government is] accusing Turkish companies of creating a shadow economy, using double accounting and propagating nationalistic and extremist ideology. ... Long wary of the influence of Islamic fundamentalism ... secular authorities appear to be linking Turkish private business to the activities of the Nurcus, an Islamic group that is banned in the country. [Nurcus is also banned in Russia].

Is it really in America's national security interests to have thousands of Turkish contractors and their families flooding into America's heartland and settling in semi-autonomous zones out of the reach of American authorities? Especially if their intent is to form intimate business and social ties with a long-aggrieved minority group?

_ _ _ _ _
H.R. 2362 was narrowly defeated on July 23, when a "suspension of the rules" vote (usually reserved for non-controversial votes with limited debate) failed to attain the required two-thirds majority. But troublingly, 220 representatives voted in favor – representing both parties and all ideological strains – with 160 opposed and 49 abstaining.
The bill could come up for a vote again, at any time.
In the original version of H.R. 2362, the stated purpose was to "encourage increased levels of commerce and economic investment [with Native American tribes] by private entities incorporated in or emanating from the Republic of Turkey." It allowed for select Native American tribes to lease land held in trust by the United States for "a project or activity … in furtherance of a commercial partnership involving one or more private entities incorporated in or emanating from the Republic of Turkey."
When the bill came up for a vote, its backers were forced to offer an amended version. The phrase "or other World Trade Organization (WTO) member nations" was placed after "Republic of Turkey" in the passages above.
The amended version still maintains that Congress "finds that the public and private sectors in the Republic of Turkey have demonstrated a unique interest in bolstering cultural, political, and economic relationships with Indian tribes and tribal members;" and that removing "barriers" and encouraging a "more robust relationship" between "Turkish and Indian tribal communities" is "in the interest" of "the United States-Turkey relationship." [Emphasis added].
These "interests" are not defined.
The bill, in both its forms, severely limits federal oversight of the investment projects, and does not even require the Department of the Interior to approve the leases. The term of the leases could stretch 75 years, effectively tying the hands of future Administrations.
Presidents would come and go. But Turkey would have a semi-permanent foothold in America's heartland.

_ _ _ _ _
The amended version of H.R. 2362 continues to single out Turkey for special treatment and, if passed, would serve as an official U.S. government endorsement of Ankara.
In the past, special considerations by the U.S. for Turkey were well-deserved. Hill staffers grew accustomed to doing favors for a secular, pro-Western Ankara that was a key strategic ally to Washington and its allies in the region.
But all that changed with the ascension of Erdogan's AKP party in 2002. Turkey has been lost to the Islamists, with alarming consequences for the West. A small sampling of recent events:

_ _ _ _ _
Perhaps most troubling – even if other WTO member nations have the same rights in the amended version of H.R. 2362 – Turkey is poised to infiltrate Native American tribal areas immediately upon passage, due to the Islamist country's intense cultivation of ties with Native American tribes through the Turkish Coalition of America (TCA). John Berrey, Chairman of the Quapaw Tribe (Oklahoma), claims:


The Turkish and Native American peoples are beginning to come together under their own momentum to develop broader and deeper economic and cultural ties.

But the "momentum" is coming from only one direction: Turkey, through the TCA. Indeed, according to the Indian Country Today Media Network:
The TCA, whose vice president allegedly lives in Istanbul, stated in a press release that H.R. 2362 is "the first time the Turkish American community took the initiative to create positive change through substantive legislation in Congress."

But the TCA has already invested millions in cultivating ties with Native American tribes. According to its 2010 IRS Form 990, the TCA incurred $1,037,496 of "expenses" for "sponsorship of educational travel for congressional members and staff as well as Native American leaders." And that's just the tip of the iceberg.

_ _ _ _ _
As Congressman Howard Berman (D-California) said on the House floor, H.R. 2362, even as amended, is "an unusual, unprecedented, and unnecessary endorsement of a state that, though an ally, continues to pursue problematic policies."

The next time this bill comes up for a vote – or any other bill that gives Turkey special investment considerations – Congress should be aware that Ankara is no longer the pro-Western state of yesterday. And Congress should be alert to possible nefarious motives of the Islamists cementing their power in Turkey.

Marc J. Fink is Director of Islamist Watch, a project of the Middle East Forum. 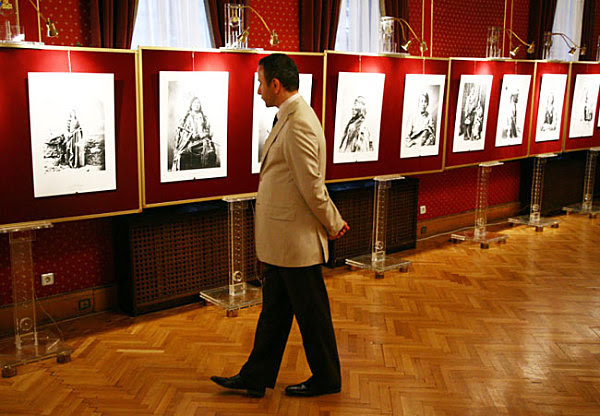 Portraits from an exhibition at Instanbul's Yıldız Palace featuring a rare collection of 19th-century portraits of Native American tribes in Turkey's possession. Native American leaders were in Turkey for a TCA sponsored educational conference at an Istanbul university.