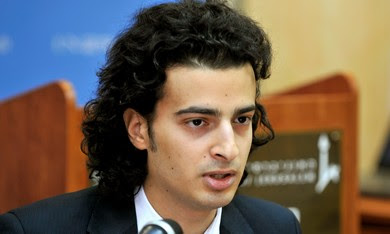 
As the revolution swelled in Cairo’s Tahrir Square nearly two years ago, there was a lot of passion and uncontrolled anger in the streets. But the angry momentum of a popular uprising needs short and pithy slogans. In Tahrir Square, there was no room for nuance.

Egyptian blogger Maikel Nabil Sanad was a central activist in Tahrir Square. An avowed pacifist, Nabil founded of the “No to Compulsory Military Service” movement in 2009 and was one of Egypt’s first conscientious observers.

But Nabil has also been an ardent supporter of Israel. In 2010, when he refused to join the military, he posted on his blog: “I also am not willing to be a pawn on the chessboard of an arms race, struggles and bloodbaths in the region. I don't want to point a weapon at a young Israeli, recruited into obligatory service, defending his state's right to exist.”

Nabil’s support for Israel is not as black and white as some activists would like it to be. In the simplest view, Israel is all bad, Palestinians are all good. Instead, Nabil sees shades of grey and lots of nuance. “We should differentiate between supporting Palestinian rights and being anti-Israel,” Nabil said at Hebrew University in Jerusalem on Sunday. Nabil's lecture about Egypt’s historical relationship with Israel drew hundreds of students to Hebrew University's Harry S. Truman Institute for the Advancement of Peace, and more than 50 students were turned away. “Supporting Palestinian state rights doesn’t mean that we have to deny the right of Israel to exist,” Nabil said.

“Me and my friends understand we won’t achieve democracy without peace,” Nabil explained. “[Israel and Egypt’s] fates are linked together. As long as dictatorships and authoritarian governments are using security to take our rights and our freedoms from us we will be losing our rights and moving backwards,” he said.

Nabil stressed that he had serious reservations about Israel: he doesn’t support Netanyahu, Likud, or the army’s compulsory draft. He doesn’t like the fact that religion and state are so closely intertwined or the treatment of women by the ultra-Orthodox. He is furious with Israel for propping up President Hosni Mubarak’s decades of dictatorship. And he blames Israel for making it impossible for Egyptians to visit – Nabil said he tried for two years to get a visa to visit Israel and begin a dialogue, but the Israeli embassy in Cairo refused to even meet with him.

But disagreeing with key aspects of the state doesn’t mean Egyptians should strike down the 30-year peace treaty with Israel, he stressed.  Nabil wants to concentrate on fostering an environment for Egypt’s nascent democracy to grow and thrive. Democracy cannot happen without peace and stability, he said, including peace with Israel.

“I am not saying that I am able to make a huge achievement,” said Nabil. “I just want to open a door for people who are like me, who want to approach the other side and cross these borders and break these walls and try to make a change.”

But many Arab activists in Egypt and in Jerusalem are furious with Nabil’s support for Israel. A dozen students interrupted his lecture at Hebrew University on Sunday, shouting “Shame on you!”  and “The Egyptian revolution hates you!”

Nabil now lives in Frankfurt, Germany, where he is studying political science for a masters degree. He knows it may be dangerous for him to return to Egypt due to his political opinions, though he could also be assassinated in Europe as well. “I never felt safe in Egypt and I will never be safe as long as this conflict exists,” he said. “I understand that I am breaking a taboo to come to Israel… and announce it.” Nabil is promoting his trip across social media and dozens of interviews with Israeli media.

Nabil was imprisoned for ten months under the military regime in Egypt. Nabil was arrested was on March 30, 2011, two months after the Tahrir January 25 revolution began. Supporters admitted he made an “easy target” for the military crackdown because of his well-known pro-Israel stance. Twelve days later after he was arrested, a military court sentenced Nabil to three years in prison for “insulting the military” and “spreading false information.” Nabil had started an online database to keep track of army abuses against civilians during the protests.

After a long hunger strike, Nabil was released on January 24, 2012, along with 2,000 other prisoners.  Since then, he has traveled widely to promote his faith in the growing Egyptian democracy, and was nominated for a Nobel Peace Prize this year.

Nabil estimated that current Egyptian President Muhammed Morsi will last “a maximum of another two months” because he has so little public support among Egyptians. And he said that he is encouraged by the progress in Egypt’s activist community. “This is a process which takes time… but the activist community is moving in the right direction,” he told the Post.

He noted that activists who were imprisoned for similar crimes of “blasphemy” against the government for army are serving shorter and shorter sentences. In 2010, an activist served four years, while Nabil served ten months in 2011, and recently, an activist was released after just a few months of imprisonment, which is another sign of progress.

Nabil's short trip to Israel is meant to regular Israelis. We cannot move forward if you refuse to listen to what I have to say, Nabil told the demonstrators on Sunday, who filed out of the lecture hall voluntarily as the crowd boo'ed, just before security threatened to remove them.

“I am not sure if we will succeed, but we are trying,” Nabil said before the lecture. “We don’t have any other option except to keep trying.”