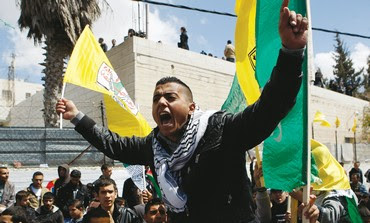 A Palestinian shouts as he holds a Fatah flag at the funeral of terrorist Maissara Abu Hamdiyeh. Photo: Mussa Qawasma/Reuters

The Fatah Central Council has accepted the Arab League's latest proposal for land swaps with Israel.

Following a meeting in Ramallah late Saturday, members of the council also welcomed US efforts to revive the peace process with Israel.

The announcement is seen as a boost for Palestinian Authority President Mahmoud Abbas, who has been facing criticism from some Fatah officials for supporting the land swap idea.

The Arab League proposal, which was presented to US Secretary of State John Kerry last month, has drawn different reactions from Palestinians across the political spectrum.

Although Chief PLO negotiator Saeb Erekat initially said that this was not a new idea and that the proposal was presented in coordination with the Palestinians, some Fatah and PA officials have come out against the land swap plan.

Other Palestinians said that the Arab League did not have a mandate to speak on behalf of Palestinians and offer territorial concessions to Israel.

Opponents of the land swap idea said they were against it because it would "legitimize" settlements in the West Bank by allowing them to remain under Israeli sovereignty in a final deal between Israel and the Palestinians.

Unlike most Palestinian factions, Fatah said that it was not today opposed to the land swap idea.

However, Fatah's leaders stressed after their meeting that they perceive the idea as meaning that there would be "minor and mutual adjustments" to the future border between Israel and a Palestinian state.

Accepting the idea does not mean "legitimizing settlement blocs" in the West Bank, they explained.

"Settlements in all the Palestinian lands are illegal. There can be no land swaps without an Israeli recognition of an independent and sovereign Palestinian state on the 1967 borders."

Fatah said it was dealing "seriously with US efforts in order to make them succeed. The success of these efforts first requires a clear Israeli recognition of the two-state solution on the basis of the 1967 borders, a freeze of settlement construction and the release of prisoners, especially those who were arrested before 1994."

Azzam al-Ahmed, a senior Fatah official, said that the Palestinians were awaiting a "full process to revive the peace talks."

He said that Kerry was expected to announce the results of his current efforts to resume peace talks between Israel and the Palestinians on June 7.

"This is the date we have agreed upon," al-Ahmed said. "Either Kerry comes forward with specific proposals to revive the peace process or he shuts the door because of Israeli intransigence."

The Fatah official said that the Palestinian position regarding the resumption of the peace talks remains unchanged - namely a full commitment to the establishment of a Palestinian state in the context of a two-state solution, the release of prisoners and a cessation of settlement construction.

"Without this, there will be no return to the peace negotiations," al-Ahmed emphasized. "We hope Kerry will carry something positive to resume the peace process."