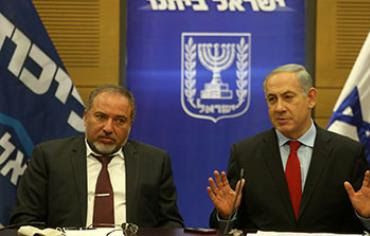 Benyamin Netanyahu faction meeting
Photo: MARC ISRAEL SELLEM/THE JERUSALEM POST
Prime Minister Binyamin Netanyahu said Monday that the purpose of his upcoming visit to the United States next month is to warn against the Iranian threat and to discuss the ongoing Israeli-Palestinian peace process.

Speaking at Likud Beytenu's weekly faction meeting, Netanyahu warned that Iran continues its role as a "terror state," and therefore it must never be allowed to obtain nuclear weapons.

The prime minister stated that Iran is continuing to violate human rights by carrying out executions of its people, as well as supporting the "massacre" of Syrian President Bashar Assad.

He pointed to recent verbal attacks by Iranian Supreme leader Ayatollah Ali Khamenei , as well as pronouncements that Iran is sending warships to America's maritime border, as  proof of Iran's true intentions.

Netanyahu said that he would demand the complete dismantling of Iran's nuclear program before sanctions are further lifted, calling for "zero centrifuges" in the Islamic Republic.

Netanyahu said that he would make clear in discussions on the peace process that Israel's interests must be upheld, including recognition of the country's Jewish nature and the security of the state's citizens.

The prime minister said that in addition to meeting with US President Barack Obama and addressing AIPAC's annual conference during his trip, he would also be visiting the Silicon Valley and Los Angeles in order to promote Israel's economic interests.

This will be the first time in many years that an Israeli premier will travel to the US West Cost.

Netanyahu's trip, which is set fro the first week of March, was expected to last five days.