Mordechai Kedar: Hizb’Allah is Getting Ready for the Big Bang

There are two main reasons for the smuggling of strategic weapons to Lebanon: One relates to Iran, Saudi Arabia and Israel, and the other relates to al-Qaeda and the Salafi jihadist organizations, both of which are parts of the “big bang” that Hizb’Allah is preparing for.


According to sources abroad, Israel attacked Hizb’Allah targets again this week, in the area of the border between Syria and Lebanon. It is widely surmised that the target of the attack was a convoy of heavy vehicles carrying Scud missiles from Syria to Lebanon. These are long range, accurate missiles with the ability to carry a large warhead.


This action is the implementation of Israel’s public declaration repeated time and again, that she will not allow the Lebanese terror organization to get its hands on weapons of mass destruction or strategic weapons that would change the balance of power, meaning missiles that are over a specific weight, range or accuracy.


Hizb’Allah has another reason to say that the attack was inside of Syria: This might provoke the Syrian army to respond to Israel, contrary to previous incidences when Bashar Asad restrained himself issuing the empty statement that “Syria will respond in the suitable time and place”. However, the Syrian army is engaged at the moment with an existential war, and has no desire or intention to enter into a conflict with Israel during this historic, fateful phase.


It is interesting that one of the Hizb’Allah spokesmen also said things of this sort, and his words add to the fact that Hizb’Allah kept a low profile this week as it marked the anniversary of the death of Imad Murghniye. Hizb’Allah did not hold large events as they have in the past, fearing that there might be attacks against the participants.


The Purpose for Smuggling the Weapons


There are two main reasons for the smuggling of strategic weapons to Lebanon: One relates to Iran, Saudi Arabia and Israel, and the other relates to al-Qaeda and the Salafi jihadist organizations, both of which are parts of the “big bang” that Hizb’Allah is preparing for.


From the point of view of Iran, which runs Hizb’Allah, the big bang will happen when the Israeli-Saudi coalition decides to act alone against Iran, when the regime of sanctions has collapsed and Iran feels free to run ahead with its military nuclear project. As Iran sees it, Israel and Saudi Arabia already feel that the United States and Europe have betrayed them, so they feel free to prepare an attack on Iran.


One tool that Iran has at its disposal to deter Israel and Saudi Arabia, and to act against them if needed, is to give long-range missiles to Hizb’Allah to use against Saudi Arabia and Israel, in that order. In the last three years it has become clear to Iran in the Syrian killing field that Teheran’s greatest and most dangerous enemy is not Israel, but Saudi Arabia. This is the reason that Hizb’Allah needs new, longer range missiles than the tens of thousands of missiles that it has today. The purpose of the Israeli attack this week on these missiles was to protect Saudi Arabia as well as Israel.


The second reason for transferring missiles from Syria to Lebanon is – if the Asad regime falls - to prevent them from falling into the hands of Sunni Salafi jihad organizations of the al-Qaeda, Islamic State or Jabhat al-Nusra sort. These organizations might make use of the long range missiles – if they get their hands on them – against Hizb’Allah in Lebanon and against its allies in Iraq and perhaps even in Iran, so in order to protect these allies Hizb’Allah is trying to transfer these long range missiles into the territory of Lebanon.


It is important to note here that there are great quantities of chemical weapons still inside Syria, and it may be that Hizb’Allah is trying to transfer them into Lebanon as well, for all of the reasons mentioned above. The world should assume that Israel has not succeeded in hermetically preventing the leaks of these strategic weapons – large, long range, accurate missiles and chemical weapons – into Lebanon, and as of today Hizb’Allah has some of these weapons, ready for use at any moment.


Anyone who visits the Golan Heights these days near the armistice line in the area of Quneitra can hear the echoes of war from Syrian territory. Mortars, cannon, tanks, RPGs and perhaps even anti-tank missiles explode continuously within earshot, and some even fall inside the Golan. This music is the swan song of the bloodthirsty regime that is slaughtering its own citizens, whose fate is sealed and now is acting according to the logic of “Let me die with the Philistines” (Judges 16:30).


Saudi Arabia contributes its part to fanning the flame by sending shoulder launched Chinese anti-aircraft missiles to the jihadists, so that they will be able to deal more effectively with Asad’s helicopters and the terrible barrel bombs that are dropped from them on the jihadists and the citizens of Syria. Russia is extremely concerned, but the Ukrainian headache bothers Putin more.


Because of the difficulties that the regime in Turkey is experiencing these days, Jordan has become the main base of operations against the regime in Syria. It is not unreasonable to expect a Syrian attack on Jordan, and it could be that the method of choice will be a Hizb’Allah style attack against a symbol of government, in Jordanian territory or outside of it such as the embassy or an aircraft.


The leaders of Hizb’Allah and Iran read the Syrian map well and are preparing themselves for the next phase of the battle, the big bang, when regional war breaks out between the Israeli-Saudi-Jordanian-Qatari coalition and Iran and its satellites. The purpose of the Israeli bombing this week was to improve the coalition’s position in this scenario.


But behind Hizb’Allah’s back, inside of Lebanon, a big problem is developing in the shape of the Lebanese Salafi jihadist organizations who are preparing to duplicate inside of Lebanon a copy of the war now being waged in Syria. Even the names of the organizations are identical to those that are tearing Syria to pieces. The day that the fighting ends in Syria – whether with Asad’s victory or defeat – they will begin the fighting inside of Lebanon, either to take revenge on Hizb’Allah for the defeat that they experienced in Syria or to exploit the victory they achieved over Asad, Nasrallah and Khamenei.


A Few Words about Terror


Terror is dangerous because it is asymmetrical warfare between two sides: on one hand a state and society that acts according to national and international law, rules honoring human rights, rights of minorities and women, trying to differentiate between a fighter and an innocent citizen and attack only the fighter, even if he hides behind an innocent child. The language that a state uses when involved in the fight against terror is limited as well, by rules of political correctness.


On the other side is a person who acts according to no rules: he wears no uniform, he does not recognize international law, has no regard for international conventions, and human rights are have no value for him. He does not constrain himself by any rule, and does not consider the rights of minorities, women or children. His remarks are not constrained by the rules of political correctness, and he calls his opponents the harshest of names in order to justify the harm he causes them.


This is the profound reason that modern states and societies today find it difficult to cope with terror, since it doesn’t operate according to the principles of these states and societies. And here is where terror has a great advantage in its unrestrained struggle against Western societies – which do constrain themselves in their war against it.


The situation of the terrorist becomes problematic when his enemy is a terrorist like him, because in this case the enemy does not constrain himself or his fighting by any principle or law, and he feels free to act as a terrorist against the first terrorist. In this situation both terrorists lose the relative advantage, therefore the war between them is extremely bloody.


This is the situation today between Hizb’Allah and its Sunni enemies, the Salafi jihadists: both sides behave as terrorists, without constraints and without bounds, with no law and no judge, and the Almighty One – Whose word and ideas both sides claim to represent – does not intervene in the bloody conflict.


There are several jihadist organizations in Syria that are in this situation: al-Qaeda fights with “The Islamic State in Iraq and Syria” (ISIS), and Jabhat al-Nusra threatens ISIS with open warfare as a result of the assassination of one of its leaders in Syria, Abu Khaled al-Suri, a week ago in Aleppo.


It may be that this is also the tragedy of radical Islam: each time a radical group manages to take over some territory and establish a base for operation, a more radical group emerges to fight with the first group, using terrorists’ methods, of course. And after the second one wins, an even more radical group will come and do to it what it did to its predecessor, over and over again.


This is the result of the Saudi operations in Syria, so is it any wonder that Obama has decided to abandon the Saudi family and throw it under the Iranian bus?


The Syrian Conflict Spills Over into Israel


In Israel and the Golan a heated argument is being conducted on the question of whether to support Bashar Asad or call for his downfall. Some jihadists have already crossed from Israel into Syria to take part in the Syrian mission to overthrow Bashar, and some are already in the paradise reserved for martyrs.


The public dispute in Israel between the supporters of Bashar and those who oppose him is also expressed in graffiti on the walls. The building of the Syrian headquarters near Quneitra, which is today within Israeli territory, is an open place where visitors can come at any time. Shown here is the writing on one of the walls. The translation of the part written in black ink is: “I am Syrian and my country is Arab, my people is a champion of freedom. May Bashar fall”. Someone else, armed with read spray paint, added the word “never”, meaning “Bashar will never fall”. 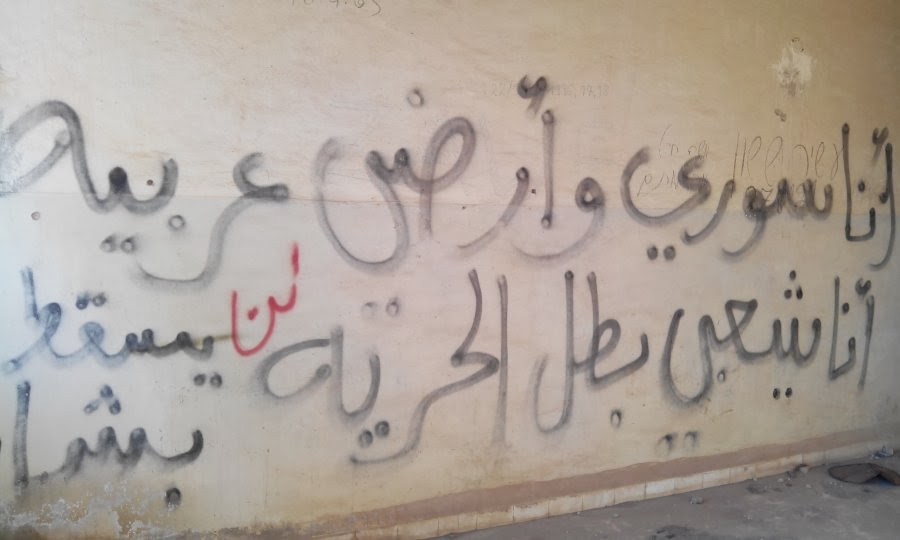