Hamas's reaction to the recent abduction of three Israeli youths was one of satisfaction. Hamas members and supporters – who generally refer to the abductees as "soldiers," even though none of them are, and two of them are only 16-years-old – called the abduction a legitimate action and an opportunity to expand armed operations to the West Bank. They also stated that it marks the start of a new intifada and the end of the Palestinian Authority (PA). Columnists on websites affiliated with the movement harshly criticized the PA for its security coordination with Israel and called on the people of the West Bank not to help Israel in locating the abductees.

The following are excerpts from reactions to the abduction by Hamas officials and on media belonging to or affiliated with the movement.

Hamas Spokesman: Resistance Is Legitimate; This Is An Opportunity To Extend The Confrontation To The West Bank 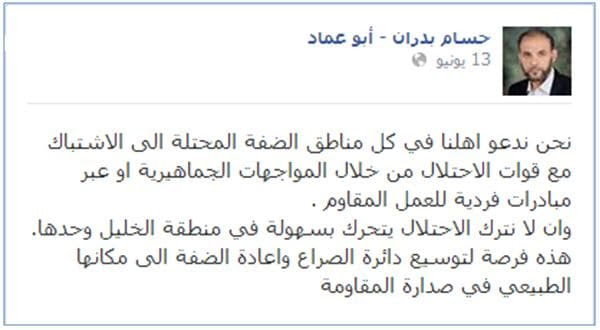 The deputy speaker of the Palestinian parliament, Ahmad Bahar of Hamas, charged the prime minister and interior minister of the newly-formed national unity government, Rami Hamdallah, "to instruct the Palestinian security apparatuses to stop the security coordination [with Israel] and silence the voices calling to help the occupation locate the three abductees." He added: "Resistance is a legitimate right [recognized] by all monotheistic religions and by U.N. resolutions. It is the right of our people to resist the occupation by every means until its removal from our lands."[2]

Hamas official Isma'il Al-Ashqar said that "the waves of arrests that the occupation forces are carrying out in the West Bank are clear proof of their perplexity... These arrests do not scare the resistance and will not detract from its determination." He added: "The resistance will reach the occupation and its settlers within the occupied territories."[3]
The West Bank -- The Next Arena Of Conflict

Columnist Iyad Al-Qara wrote on the Hamas website: "The unique resistance operation carried out in the West Bank fills the Palestine public with joy and glee and enjoys [this public's] support and encouragement... The abduction of the soldiers [i.e., the youths] in Hebron is resounding proof of the public's unanimous support for the abduction of soldiers, no matter what their repercussions, [and also proves] that the abduction of soldiers is the best and most important way to resolve the issue of the [Palestinian] prisoners incarcerated in the jails of the Israeli occupation... The West Bank is now moving into a new and unique phase of resistance activity, and it emphasizes that it will be the arena of conflict in this next phase.[4]
The Palestinian People Has Not Lost Faith In Itself And Its Resistance

Prominent Hamas member Dr. Yousuf Rizqa wrote: "There is no tangible information on the Hebron operation. Three settlers or soldiers are currently in the hands of the Palestinian resistance, [and] Netanyahu's government and its security apparatuses have no information on the operation, or even a lead... The abduction was planned professionally and carried out cleverly and bravely. This courage is perhaps the main reason for its success so far. The people of Hebron have a long heritage of courage, and they possess an iron will...

"The Hebron operation, like the abduction of Gilad Shalit, will be burned into the consciousness of the occupation and the leaders of the settlement [enterprise], causing them to realize that the occupation and settlements have no future and that the Palestinian people, which has lost faith in the Arab and international system, has not lost faith in itself and its resistance ability. [It will also cause them to realize] that the waning of the Arab Spring revolutions will not provide the occupier with an opportunity to continue the occupation – for the Palestinians have decided to rely on themselves and not to wait for the Arabs or the international [community]."[5]

Ibrahim Al-Madhoun, editor-in-chief of the Hamas-affiliated website Siraj Al-I'lam, wrote: "The disappearance of three Israeli soldiers and the possibility that they are in the hands of the resistance is good news for over 6,000 [Palestinian] prisoners whom the occupation treats with arrogance and brutality [in terms of] their humanitarian needs. This is a succinct message from the resistance, [conveying] that the voice of the hunger-striking [prisoners] has been heard...

"It's well known that an operation in which 10 Israeli soldiers are killed is easier for the occupation than the disappearance or abduction of single soldier [snatched] from [Israel's] military forces, which are armed to the teeth. Abducting and hiding soldiers uncovers the weakness and fragility of this entity [i.e., Israel], which boasts of its strength and its intelligence apparatuses. Three soldiers have disappeared into a well-guarded hideout, built like a maze, and the enemy and his arrogant army, who monitor [the area], do not know how, when and where they have gone. Moreover, the abduction and concealment of soldiers revitalizes the [Palestinian] cause and pours new life into its dried up veins.

"The position of the PA is condemned by all Palestinians, and is inconceivable [even] in the eyes of President 'Abbas's own associates. Real coordination activity is taking place, aimed at discovering the fate of the soldiers, even though they disappeared in Area C, which is not controlled by the [Palestinian] apparatuses...

"The PA's attempts to gain an achievement by helping the occupation locate the hostages spells the beginning of its end and its ejection by the people. Hence, I advise [our] brothers in the security apparatuses to refuse to perform any action that will serve the occupation in this matter, and I hope that our people stop relaying information to this entity at this time, no matter how trivial. Any [action] by the [Palestinian] apparatuses and officers that helps the occupation is a mark of shame that will follow [these officers] and their sons.

"This three-pronged operation is a good opportunity for real changes in the West Bank, and it will mark the beginning of an intifada, be the consequences what they may. Gaza is not far from the arena [of events], and the threats voiced by Netanyahu and his government, and their holding Hamas responsible, suggest [that they have] hostile intentions towards the Gaza Strip.

"The Palestinian resistance in Gaza, all factions included, is ready to repel any expected attack. It will be able to stand fast and endure. Any Israeli aggression will encounter a steadfast, united and powerful people, with an [iron] will that shall take everyone by surprise. This is the opportunity we were waiting for to thwart Israel's plans in the region, [which are aimed at] dividing the Palestinian ranks, obstructing the resistance and severing it from its Arab and Islamic surroundings."[6]

Copyright - Original materials copyright (c) by the authors.
Posted by Sally Zahav at 3:15 AM