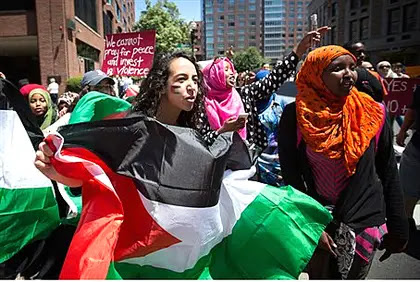 Anti-Israel protest outside Boston's Israeli consulate
Elan Kawesch
A group of pro-Israel demonstrators were attacked and verbally and physically assaulted by anti-Israel extremists outside the Israeli consulate in Boston on Friday.

Anti-Israel groups, led by the radical Jewish Voice for Peace (JVP), organized a demonstration outside the consulate against Operation Protective Edge - Israel's military operation to stamp out rocket fire from Gaza. In 2013 the Anti-Defamation League (ADL) anti-hate watchdog listed JVP as one of the top ten most active and influential anti-Israel groups in the US.

Upon hearing about the demo, a small group of about a dozen pro-Israel activists quickly mobilized for a counter-demonstration. But upon being spotted by the anti-Israel group things soon turned ugly.
In a video taken by staff inside the consulate, a roughly 100-strong crowd of anti-Zionists can be see swarming around the pro-Israel group.

Pro-Israel activists said demonstrators' chants included calls for Israel's destruction and the establishment of an Arab state in its stead ("From the river to the sea, Palestine will be free"), and that some hurled anti-Semitic insults like "Jesus-killers" at them.

But the abuse also turned physical.

Chloe Valdary, a senior at the University of New Orleans and founder of the Declare Your Freedom Initiative, is pressing charges after an attack by a female protester who told her that "Jews will go to hell Inshallah [G-d-willing in Arabic - ed.]" and then proceeded to physically assault her. (See video below)

Valdary, who is not Jewish, said she heard other demonstrators call for Jews to "burn in hell" and to "go back to the Dead Sea (sic)".


"It's the first time I've ever experienced it," she said of the sheer level of aggression at the rally. "We usually get the hate but not the assault associated with it."

She has filed charges with the Boston police department's Brighton precinct against the woman.

Chloe Valdary (center) was assaulted as the sides met

Valdary (L) with other pro-Israel activists

All photos by Elan Kawesch.