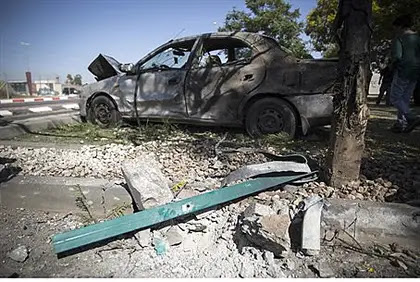 Car damaged by Gaza rocket
Flash 90
The Palestinian Authority's envoy to the United Nations Human Rights Council (UNHRC) has said the PA has no hope of pressing charges against Israel in international courts - because Palestinian terrorist groups are far worse violators of international law themselves.

Since peace talks between Israel and the Palestinian Authority fell apart after the PA applied for membership in international agencies, many Palestinian factions and advocates have pushed for the PA to sign the Rome Statute and press charges against Israel in the International Criminal Court at the Hague (ICC).

But contrasting Israel's conduct during Operation Protective Edge to stop rocket fire from Gaza - in which Israeli forces always warn civilians before launching airstrikes - to the actions of Hamas and other armed groups, Ibrahim Khreisheh said any such move would surely backfire.

Noting concerns that Israel could launch legal offensives of its own against the PA should it sign up to the ICC, the presenter asked whether such a move would be realistic. The response was unequivocal.

"The missiles that are now being launched against Israel - each and every missile constitutes a crime against humanity, whether it hits or misses, because it is directed at civilian targets," said Khreisheh.

He went on to claim that Israel, too, was guilty of such crimes during the conflict, and also mentioned contested claims about the legality of Israeli building in Judea and Samaria.

But he maintained that human rights abuses by Palestinian terrorist groups were far worse - particularly when it came to harming civilians.

In order to launch an appeal to the ICC, Khreisheh said, all "Palestinian factions" would need to commit, in writing, to refrain from targeting Israeli civilians - something which none of them are likely to do.

In stark contrast, he noted how "many of our people in Gaza appeared on TV and said that the Israeli army warned them to evacuate their homes before the bombardment."

"In such a case, if someone is killed, the (international) law considers it a mistake rather than an intentional killing, because (the Israelis) followed the legal procedures," he explained.

"As for the missiles launched from our side - we never warn anyone about where these missiles are about to fall or about operations we carry out."


The interview was translated by MEMRI - the Middle East Media Research Institute.

Khreisheh did not mention other serious breaches of international human rights law by Hamas and other terrorist groups, including the widespread use of human shields.