Netherlands Imam Slams Democracy: Europeans Have Yet To Get A Taste Of Its Woes - MEMRI

In a Friday sermon delivered on April 24, 2015 in Helmond, The Netherlands, Sheikh Abdelhamid Aynelhayat said that democracy was the cause of strife. "Europeans love democracy because they haven't yet had a taste of its woes," he said.

Following are excerpts from the sermon, which was posted on the Internet. 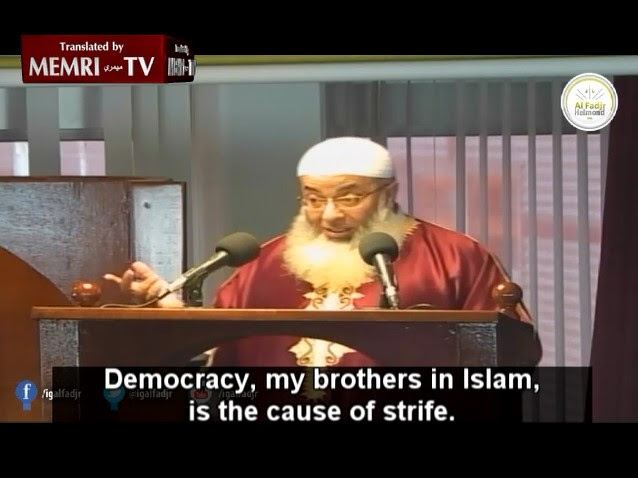 Sheikh Abdelhamid Aynelhayat: "The primary reason for the spread of strife is the rule of man-made laws, and refraining from instating the sharia - both the Koran and the Sunna. Strife proliferates when the Koran and the Sunna are ignored. Instead of instating the law of Allah, people instate man-made laws, and thus strife proliferates. What does 'democracy' mean? It means that people rule themselves by themselves. Democracy, my brothers in Islam, is the cause of strife.

"Europeans love democracy because they haven't yet had a taste of its woes, but this is becoming apparent. In democracy... Let's take, for example, a certain village or town, where they want to implement democracy. Democracy requires that elections be held, in order to determine who the leader of that village or town would be. In a democracy, the people are given the right to vote, and whoever gets the most votes represents [the people]. The winner of the elections might be a riotous drunkard or a criminal pirate, who happens to belong to a large tribe that voted for him... In democracy, we have to accept that criminal, riotous drunkard thief as our president. That is what democracy dictates.

"At times, you see a man who represents some village in parliament - this happens in our country [Morocco] and many others... That man cannot read or write, has no understanding of politics, and does not even know the borders of his own country... Morocco's border to the west is the Atlantic Ocean. You ask him about the country's border to the east, and he says: America! He is a clueless ignoramus, yet he represents the people. What can he possibly do for us? This is what democracy tells you. "Democracy forces us to accept its rulings and moral values: Daughters may get married without obtaining parental consent, men may marry men, women may marry women, people can say whatever they want, they can curse and swear... Democracy allows this.
[...]

"We say to our sisters, to the women... By Allah, brothers, when I visit Helmond, I stay in the mosque and hardly go out, because I fear the strife of temptation. When you go out, you see a Muslim woman wearing a mini-mini-mini-skirt. The streets are full of nudity. It is best for a Muslim to avoid this temptation. Today, in the market, I saw one of our women wearing an outfit that perhaps even Satan himself would be ashamed of. 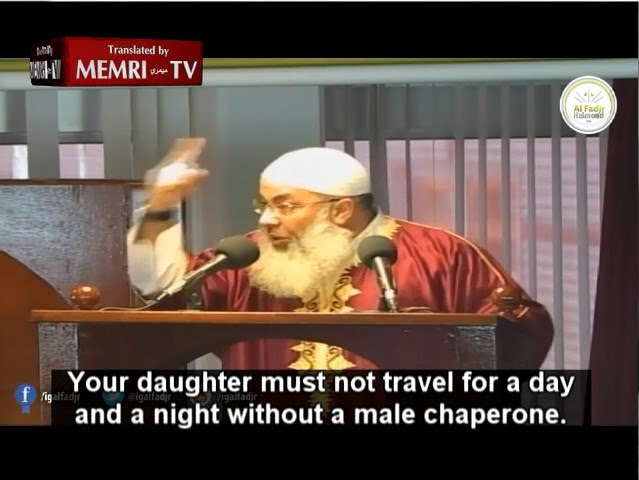 "Brothers, give your daughters advice. I heard that in a nearby city, 10-12 of our girls are planning an organized trip. Where to? They are going to Spain for a vacation, without their fathers, their brothers, or anyone. Are they going on a pilgrimage to Spain?! God forbid. Your daughter must not travel for a day and a night without a male chaperone.

"People will call me an extremist, saying I'm an ISIS terrorist. Whatever. Fear Allah! This is the advice of the scholars and the prophets. We cannot allow our nation to give rise to corrupt people. I am not a radical or an extremist. I am only commanding good and forbidding evil. I know that if I give a lot of advice, people with a secular mindset will go to the police, and say that there is a radical imam... Someone did this before... Brothers, we want our Islamic nation to be pure! Pure!"