The Sinai – An Epicenter of a Mounting Islamist Insurgency - Dr. Shaul Shay

A recent attack on a military vessel north to Rafah is the second attack against a maritime Egyptian target in the Mediterranean, conducted by ISIS affiliated group and a part of the group's initiative to extend the theaters of conflict beyond the territory of Sinai. Dr. Shaul Shay on the region and the Islamic State's Egypt affiliate: Sinai Province 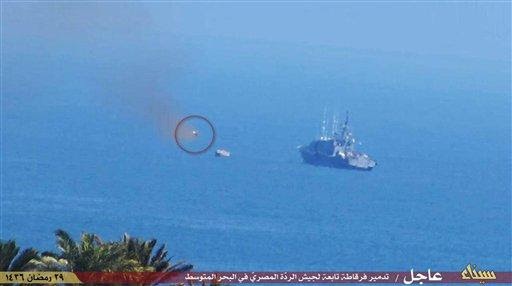 An Egyptian naval vessel has caught fire near Rafah in North Sinai during a clash with fighters affiliated with the Islamic State (Sinai Province). The patrol boat spotted the fighters from the Sinai Province group on the coast of Rafah on July 16, 2015, and engaged them. The boat went up in flames during an ensuing firefight. The Egyptian military said it suffered no casualties in the attack.

The Islamic State's Egypt affiliate, Sinai Province, has claimed responsibility for the attack on Twitter. Sinai Province released a statement saying its jihadists had carried out a rocket attack on a naval vessel belonging to the "apostasy army" in the eastern Mediterranean. A series of pictures released by the group, showed a missile approaching and striking the vessel, causing a large explosion.

It is not clear how the boat was hit, but Sinai Province fighters have started to deploy wire-guided missiles against tanks and armored vehicles that could be used against the boat.

Egyptian officials said that the ship is a troop carrier that patrols territorial waters and has frequently been used to transport army and police personnel to mainland Egypt. The sea route avoids the overland journey through Sinai, where Islamic militants target government forces.  The vessel has the capacity to carry about 70 men but it is not clear how many people were onboard when it caught fire.

On November 12, 2014, an Egyptian Navy patrol boat came under attack in the Mediterranean. Military sources have reported that four officers and 13 soldiers were killed in the attack. The vessel was conducting a routine patrol when it was attacked at sea by armed men on four "fishing boats". The naval vessel had been set alight in an exchange of fire with assailants. The attack took place off the coast of the Damietta province in the country's north east, about 70km from Egypt's shore. Air and naval reinforcement forces were summoned to respond to the attack and rescue operations have evacuated the wounded servicemen to a military hospital.

Two days later, on November 14, 2014, a group calling itself the "Youth of the Land of Kenanah" (aka Egypt) claimed responsibility for the attack on the naval vessel, declaring that it had captured eight missing troops. The group made the announcement in a video recording featuring four masked men against the backdrop of a flag associated with the ISIS militant group.

An Egyptian security official claimed that the perpetrators belonged to Ansar Beit al Maqdis (Sinai province) and they attacked the Egyptian naval vessel that they thought was carrying 200 soldiers to the Sinai Peninsula. The incident in the Mediterranean came days after Ansar Beit al-Maqdis pledged its allegiance to the Islamic State (ISIS).

The Egyptian government is fighting an insurgency that has killed scores of policemen and soldiers, against Ansar Beit al-Maqdis (Sinai Province) and other Sinai-based armed fighters who launched an insurgency after the army overthrew President Mohamed Morsi.

The volatile North Sinai region, where Rafah is located, is an epicenter of a mounting Islamist insurgency. On July 1, 2015, large numbers of highly trained assault forces, many of them suicide bombers, backed by auxiliaries, staged several waves of attack in an attempt to seize control of military checkpoints. Simultaneous attacks were carried out in and around Sheikh Zuweid and Rafah, the area of heaviest military and police deployment. Twenty one Egyptian soldiers and over 200 militants were killed.

Hamas denied involvement in the Sinai attack. Yet Egyptian intelligence sources confirm that the Gaza continues to shelter hundreds, if not thousands, of potential terrorists.

The attack on the military vessel north to Rafah is the second attack against a maritime Egyptian target in the Mediterranean, conducted by ISIS affiliated group and a part of the group's initiative to extend the theaters of conflict beyond the territory of Sinai.