Syrian Poet Adonis: Unless The Arabs Separate Religion And State, They Will Become Extinct - MEMRI


In a recent address, Syrian poet Adonis said that it was necessary to change "the infrastructure and culture of society" and not merely the leadership.


In a recent address, Syrian poet Adonis said that it was necessary to change "the infrastructure and culture of society" and not merely the leadership. Speaking at the first convention of the Adhoc organ! ization, a London-based "secularist, modernist, pluralist" international NGO, Adonis called for separation of religion and state, and said that "If these deep-rooted steps are not taken, I think that we Arabs will become extinct… because we have no [unique] identity, and we contribute nothing to the building of the world." The convention, titled "The Roots and Causes of Islamic Violence," was held in Brussels on May 22, and Adonis' address was posted on the YouTube account of the I Think Magazine.

Syrian Poet Adonis: "At the advent of Islam, the inter-Islamic war did not cease for 50 years. Three of the founding caliphs were killed during that period. Abu Bakr is said to have died of poisoning, but Omar, Othman, and Ali were kille! d. When three funding caliphs are killed it raises some questions. Afterwards, there was the Battle of the Camel, as you know... What I’m trying to say is that Islam was founded amid blood, violence, and killing."

"Wahhabism is the movement that inherited this violence, and institutionalized this interpretation in our times. Therefore, it comes as no surprise that Muslims who went to Syria – as well as the Muslims living in Syria, Iraq, and all the Arab countries – behave like invaders in the full sense of the word. They allow themselves to take prisoners, to kill, to plunder, and to kill children and elderly people in the most despicable ways. I've seen pictures of children who were not killed by the sword but sawed with a saw. Why? Because they are considered to be worth less than animals.
[...]

"We are facing a cultural problem, not just a political one. Since 1950, the Arabs have done nothing but change regimes. They staged revolutions and replaced the authorities – but with each change in leadership or regime, society only collapsed and disintegrated further.

"Changing the leadership is meaningless in and of itself. The important thing is to change the infrastructure and culture of society. The only way to d! o so, even if it is not enough... We all know what it is, and we keep saying this: We must start to separate the religious from the political, cultural, and social. The second thing we must do, after the separation of religion and state, is to work on helping ourselves to establish a democracy. Some people talk about Islamic democracy...
[...] 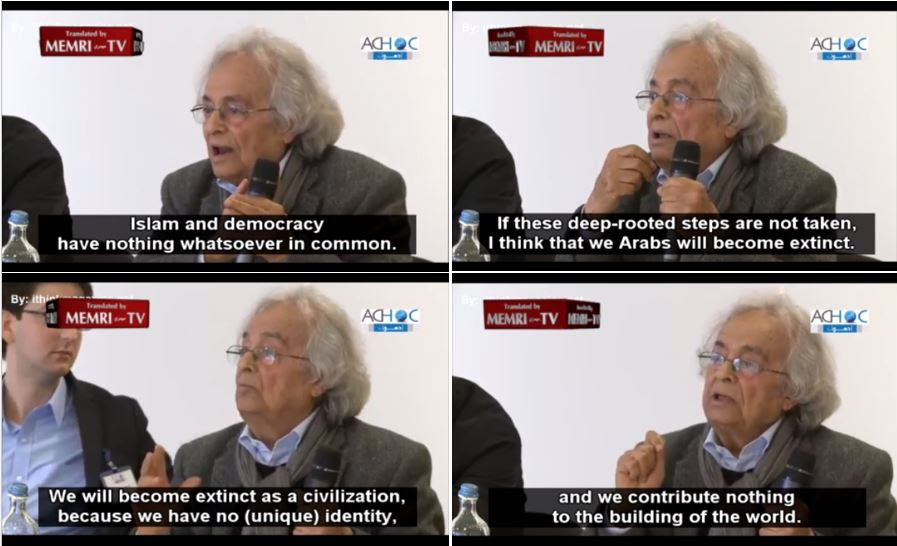 "Islam and democracy have nothing in common whatsoever. Democracy is a Western-Hellenistic notion. Islam has a different notion, the shura, but this s a joke.... Shura councils were composed of tribal chiefs, who did not represent the common people. So this is a joke. If these deep-rooted steps are not taken, I think that we Arabs will become extinct. We will become extinct as a civilization, because we have no [unique] identity, and we contribute nothing to the building of the world. "