Qatari Prof Al-Ansari: Terrorism Is Not A Reaction To Injustice - MEMRI

Commenting on what he called the "culture of hatred," Prof. Abd Al-Hamid Al-Ansari, former Dean of Islamic Law at Qatar University, called to interpret the Quranic texts "in a progressive, humanistic way"

Commenting on what he called the "culture of hatred," Prof. Abd Al-Hamid Al-Ansari, former Dean of Islamic Law at Qatar University, called to interpret the Quranic texts "in a progressive, humanistic way" in order to shield the youth from ideological fanaticism and to break away from the "discriminating, fanatic, and racist aspects" of our past. Prof. Al-Ansari, speaking on Sky News Arabia on August 5, said that while terrorism is often described as a reaction to political injustices, "this is not true. It's an illusion. Terrorism is an action, not a reaction." 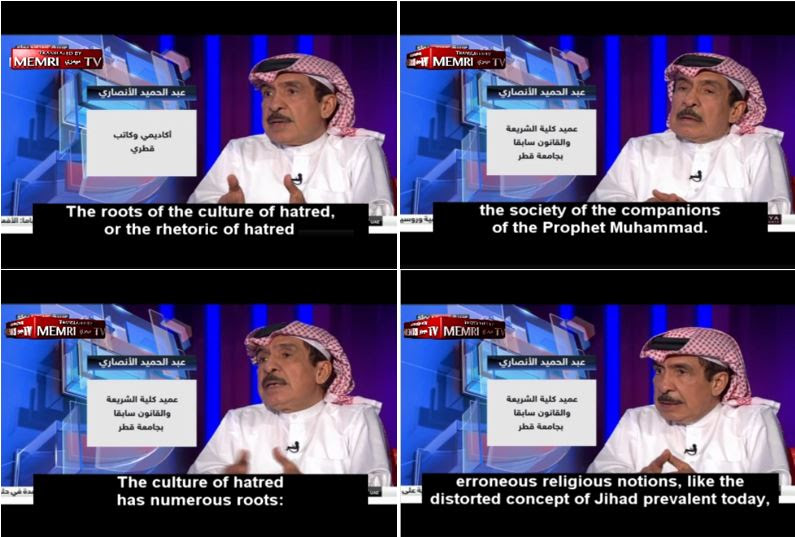 Abd Al-Hamid Al-Ansari: "The roots of the culture of hatred, or the rhetoric of hatred, go way back, to the days of the kharijites, the first terrorist organization, which rebelled against the best Islamic society, the society of the companions of the Prophet Muhammad. The culture of hatred has numerous roots: erroneous religious notions, like the distorted concept of Jihad prevalent today, the concept of "loyalty and disavowal," which is, in fact, hatred of people who subscribe to other religions."

Interviewer: "Aren't there prominent religious texts that... You are a professor of shari'a, and former Dean of Islamic Law at Qatar University... Don't we have a problem with some religious texts, which are hostile towards the other?"

Abd Al-Hamid Al-Ansari: "Texts can be interpreted in various ways. You can interpret texts in a progressive, humanistic way, especially the Quranic texts. The Quran is meant to instill values and morals and to prevent injustice. We all know that. But texts are always formed within a specific social reality." 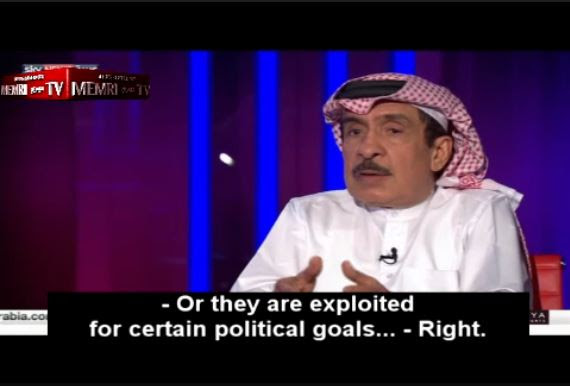 Interviewer: "Or they are exploited for certain political goals..." 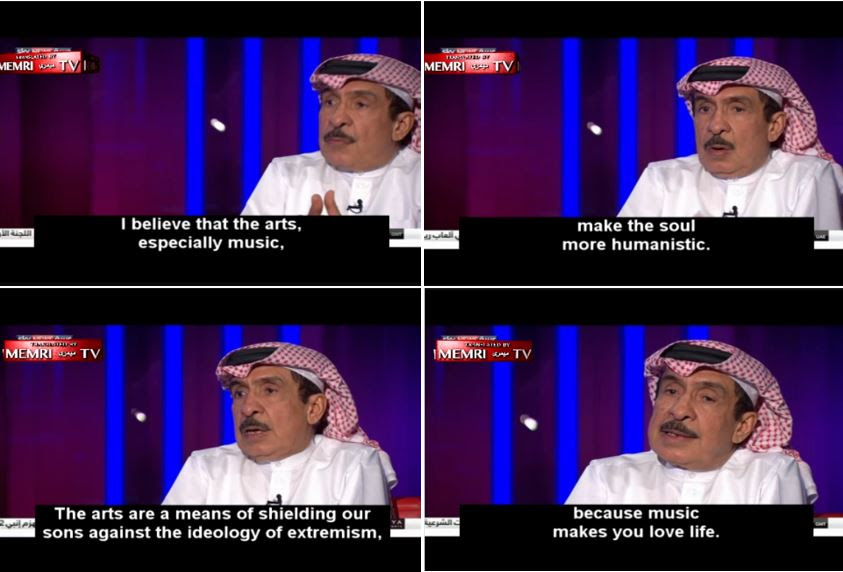 "I believe that the arts, especially music, make the soul more humanistic. The arts are a means of shielding our sons against the ideology of extremism, because music makes you love life. All forms of art make you love people, love life. They make you more humane, more tolerant. If you manage to instill this within the minds of the youth, you shield them from ideological fanaticism. you shield them from ideological fanaticism. Fanaticism takes control over people who hate life, whose hearts are empty. 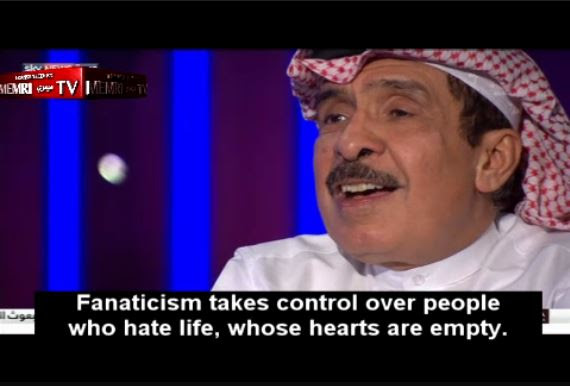 "Our main obstacle, in my opinion, is our clinging to the past, to our heritage. The Arab individual is programmed to glorify the past. We are unable to break away from our heritage of fanaticism. I am not saying that we must break away from our past - only from its negative and inhumane aspects, its discriminating, fanatic, and racist aspects. 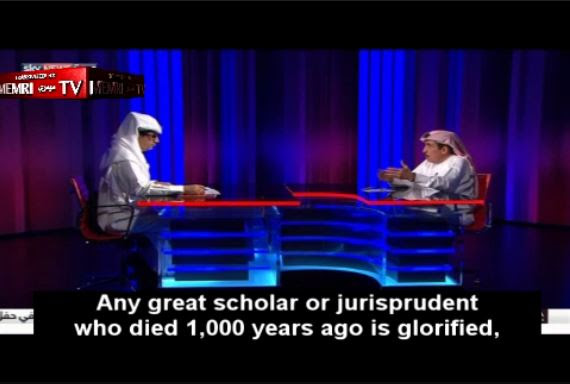 "Any great scholar or jurisprudent who died 1,000 years ago is glorified, and people cling to his sayings, even though these sayings - his rulings, his fatwas - were solutions to problems of his days. If he banned music or the construction of churches, should I ban them too? 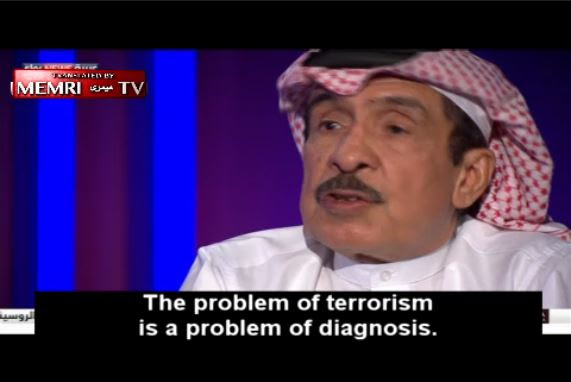 "The problem of terrorism is a problem of diagnosis. If you do not diagnose a disease correctly, you cannot treat it properly. Most of the people who diagnosed terrorism have described it as a reaction to political injustices. For example, they talk about the torture of Muslim Brotherhood members in prison, in the days of Abdel Nasser. Or they describe terrorism as a reaction to "extreme secularism." Dr. Muhammad Ammarah says in his book that "extreme secularism" gave rise to [Islamic] extremism. He says that the secularists' provocations and their mocking of religious symbols are what gave birth to terrorism. These people talk about the tyranny of Arab regimes..."

Interviewer: "In your view, these are all pretexts?" 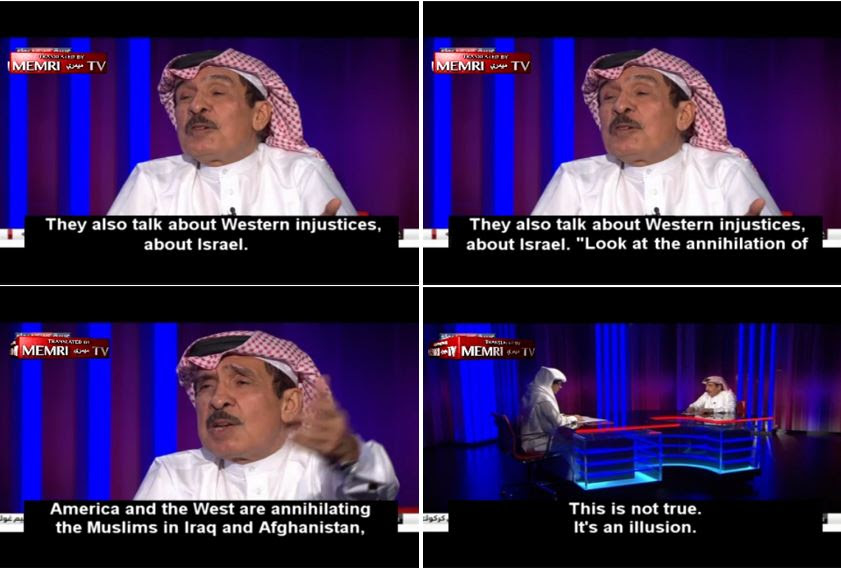 Abd Al-Hamid Al-Ansari: "It is always [a reaction]. They also talk about Western injustices, about Israel. They say: "Look at the annihilation of Muslims. America and the West are annihilating the Muslims in Iraq and Afghanistan, and the [Muslims] are wreaking vengeance on the West. [Terrorism] is a reaction." This is not true. It's an illusion. Terrorism is an action, not a reaction. The fanatic ideology has existed among us since the days of the kharijites."

"Are we supposed to wait for the problem of the Middle East to be resolved, so that the terrorism will come to an end?!"