Saudi writer Khaled Mushawah said that a reformulation of Islamic concepts is a positive thing, as it is in the nature of Mankind to reexamine concepts and to develop.

Saudi writer Khaled Mushawah said that a reformulation of Islamic concepts is a positive thing, as it is in the nature of Mankind to reexamine concepts and to develop. Notions should develop in keeping with changing political, economic, and social circumstances, he said. Mushawa, speaking in a Rotana Khalijiyya TV interview on October 7, cited the Muslim Brotherhood rule in Egypt as an example of political rigidity, which "failed to overcome the past." The Jihad movements arose "because our understanding of the meaning of Jihad and its forms was stagnant," he said.

Khaled Mushawa: "The correct reformulation of [Islamic] notions is a very positive thing, not a negative one. Our problem has always been that we believe that the reexamination of concepts..."

Khaled Mushawa: "A defeat, or something negative. But the truth is that this is the nature of humanity, the nature of Mankind. Man makes progress in all fields. It is impossible to maintain the same notion for 100 years. Man must develop. The political, economic, and social circumstances change. Life changes. Everything changes. If you go to the history books and examine the writings of the four imams, you will see that fatwas that they issued early on in their lives are completely different - and even contradict - fatwas issued late in life. This is because the imam lived in a certain era, and then times changed, and the situation was different.

"In my opinion, the rule of Ennahda in Tunisia was completely different from the rule of the Muslim Brotherhood in Egypt."

Interviewer: "How does the Tunisian experience differ from the Egyptian one?"

Khaled Mushawa: "There was flexibility in Tunisia in politics and in other aspects, while in Egypt, the rule was characterized by political rigidity. There was insistence upon ideas held by the Muslim Brotherhood 70 years earlier."

Interviewer: "So the Muslim Brotherhood failed in their management..."

Khaled Mushawa: "They failed to overcome the past. The founders of the Muslim Brotherhood wanted to achieve today what they relied upon 70 or 100 years ago. This is impossible. The circumstances today are different. The world is different. The political, social and economic reality is completely different. So we must grapple with reality with the present political circumstances. This was the main mistake of the Muslim Brotherhood in Egypt.

"Why did the Jihad movements arise? Because our understanding of the meaning of Jihad and its forms was stagnant. The last one to write about it did so 600 years ago. Since then, nobody has written or talked about it. The ulema interprets texts that were in keeping with the times 600 years ago. They talk about Dar-al-Kufr and Dar-al-Islam."

Interviewer: "This has changed."

Khaled Mushawa: "Today, there is no Dar-al-Kufr or Dar-al-Islam. When you talk about Dar-al-Kufr  today, you are talking about countries in which Muslims pray, conduct their rites...  What does this have to do with [Dar-al-Kufr]? 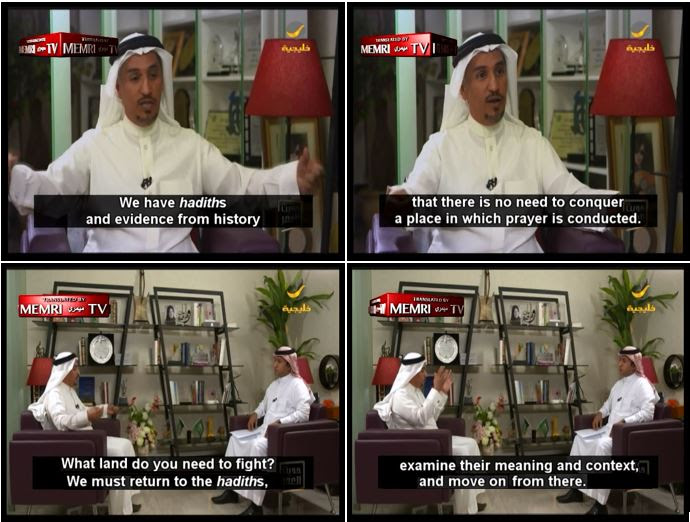 "We have hadiths and evidence from history that there is no need to conquer a place in which prayer is conducted. What land do you need to fight? We must return to the hadiths, examine their meaning and context, and move on from there."