Reparations for Jews from Arab Countries Should Be an Integral Part of Any Peace Agreement - Dr. Edy Cohen


The time has come for these states and their leaders to own up to their misdeeds, apologize for this injustice, and compensate those whose property they stole. 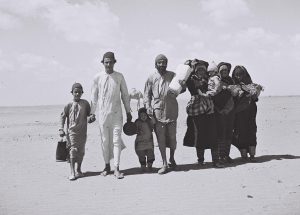 EXECUTIVE SUMMARY: No solution for the Palestinian refugee problem is possible so long as justice is not served for the Jewish refugees from the Arab countries.

The Palestinians and their erstwhile international champions are commemorating Nakba Day on May 15. Just as the Jerusalem mufti Hajj Amin Husseini, the Palestinian Arabs’ leader from the early 1920s to the late 1940s, would habitually condemn the Balfour Declaration from his World War II Berlin headquarters to ingratiate himself with his Nazi masters, so May 15, the date when the British Mandate ended and the state of Israel came into being, has become the day on which the Palestinians’ annually commemorate their self-inflicted “catastrophe” (or Nakba).

No one can ignore the Palestinian refugee problem. Yet no one speaks of the predicament of the larger number of Jews expelled from the Arab states in the wake of Israel’s establishment. Having failed to abort the newly established Jewish state by force of arms, these states took revenge on their own Jewish communities, some of which had lived in those lands way before their Arab/Muslim conquest in the seventh century CE.

About 900,000 Jews of Arab countries were forced to leave their homes, and their properties were summarily expropriated. In some of those countries, primarily Egypt and Iraq, that stolen property is estimated today in the hundreds of billions of dollars. This includes many buildings and hundreds of beautiful synagogues, enterprises, and private assets that were confiscated solely because their owners happened to be Jews.

Those Jews were expelled and/or forced to flee their homelands in fear of their lives. They were subjected to persecution and numerous pogroms, though they had in no way harmed their Arab compatriots – unlike the Palestinian refugees, who fled in the wake of a war of annihilation that their leaders and the Arab regimes had waged.

As part of the recent Arab League summit in Jordan, the 2002 Arab Peace Initiative was revived. It offers Israel normalization with the Arab and Muslim states in return for a withdrawal from Judea and Samaria and the establishment of a Palestinian state with Jerusalem as its capital.

Not surprisingly, the statement issued by the summit demands concessions only of Israel. If, however, Jerusalem decides to enter peace talks on the basis of this plan, it must demand an explicit apology from the Arab states that expelled their Jewish citizens in the course of the conflict. Israel must further insist that these Jews be compensated for the loss of their earthly properties and for the suffering attending their expulsion.

Over the course of history, countless peoples have afflicted the Jewish people. Some have apologized, and some have even tried to atone for their misdeeds. For example, the Portuguese and the Spanish have apologized for their persecution of Jews, and now offer passports to all Jews whose families were expelled from those countries, as far back as the Expulsion of 1492. The Germans, who annihilated one-third of the Jewish people, have apologized, signed a reparations agreement with the state of Israel, and compensated numerous Holocaust survivors.

In contrast, the Arab states are not only unwilling to pay compensation to those Jews they expelled, but refuse to acknowledge this atrocity in the first place. The time has come for these states and their leaders to own up to their misdeeds, apologize for this injustice, and compensate those whose property they stole.

Israel can help to redress an historical injustice if it makes it unequivocally clear that it will not sign an agreement on ending the conflict with the Palestinians and/or the Arab states until the issue of the Jewish refugees and their plundered property in the Arab countries is resolved.

As the state of the Jewish people, Israel has a supreme moral duty, along with a right anchored in international law, to demand that the Arab states compensate their past Jewish citizens for the assets and lands that were illegally and unjustifiably wrested from them.

Unfortunately, Israeli governments have thus far ignored this issue altogether. One can only hope that the current and future governments will come to their senses as soon as possible, since no solution for the Palestinian refugee problem is possible so long as justice is not served for the Jewish refugees from the Arab states.


Dr. Edy Cohen is author of the book The Holocaust in the Eyes of Mahmoud Abbas (Hebrew).