The crisis between Cairo and Doha continues to deepen, with the former accusing the latter of regional meddling and supporting terrorist organisations 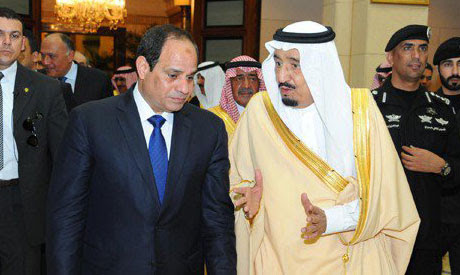 Earlier this week, Egypt severed diplomatic ties with Qatar, imposing a series of sanctions on the small Gulf state in coordination with Saudi Arabia, the UAE and Bahrain.

The four countries accuse Qatar of supporting terrorist organisations, interfering in Arab states' internal affairs, and boosting strategic ties with Iran, challenging a general policy of other Gulf countries towards Tehran and thus threatening the national security of Arab states.

Egypt leveled a number security-related accusations against Qatar, including backing the Muslim Brotherhood group -- which Cairo deems a terrorist organisation -- by harbouring its fugitive members, as well as supporting local pro-Brotherhood groups involved in recent terrorist attacks in Egypt, including the April bombing of a church in Alexandria.

Other accusations include promoting extremist ideas and backing terrorism in Sinai, as well as meddling in Cairo's internal affairs by sponsoring a plot to sow strife and division. The latter is a reference to Qatari media channel Al-Jazeera, pro-Brotherhood TV channels such as Al-Sharq and Mekameleen and international stations like Al-Arabi, as well as Cairo's belief that space in Western media has been earmarked to attack the country.

A high-profile military expert said Qatar has been backing and financing security threats to Egypt in three regions: Gaza, Libya and Sudan.

The source says Cairo has strong evidence that Qatar has financed militant organisations working against Egypt in Libya.

"In November, security authorities in Misrata arrested 30 Egyptians, including seven women, who joined the ranks of the militant group Daesh, and who admitted to have delivered messages, money and communication devices to militants of the group's Egyptian affiliate, Ansar Beit Al-Maqdis, during their vacations in Egypt."

Investigations showed that Qatar and Turkey are behind militants with connections with extremist organisations, including Al-Qaeda leaders Abdel-Hakim Belhadj and Hisham Ashmawy, who is also the commander of the armed wing of Al-Morabeton group that was based in Sinai before Ansar Beit Al-Maqdis swore allegiance to Daesh.

The two countries have trafficked Egyptians to Istanbul to join extremist groups in Libya and Syria, the source said.

A source in Cairo says that in Sudan, Qatar has played the same role, starting with Qatar's Emir Tamim Bin Hamad's visit to Morocco in December 2013, when he stopped in Sudan on his way back.

During the visit, Qatar paid large funds to rebels in Sudan's war-torn southern Darfur region to divert militia violence against the Khartoum government to Libya, and thus boost militant groups along the border with Egypt.

More recently, the March visit to Sudan by Qatar's Sheikha Moza Bint Nasser, the mother of the current emir, is believed to have spearheaded a media campaign in Sudan against Egypt, the Cairo source added.

This campaign includes an interview with Sudanese President Omar Al-Bashir that focused on points of dispute with Cairo, as well as his remarks that Sudan's military had seized Egyptian armoured vehicles from rebels in the southern Darfur region.

Sources in Cairo said Egypt manufactures and sells the vehicles to Libya and South Sudan, which absolves Cairo from responsibility of how the vehicles were used. Egyptian President Abdel-Fattah El-Sisi denied Cairo is supporting the rebels.

"Sudan is in trouble following the crisis with Qatar, which has sponsored the change in Sudan's stance with Egypt," said military expert Mohamed Qashqoush.

"More escalation was expected from Sudan. Without the recent intervention from Arab countries to curb Qatar's moves, Sudan would have moved ahead along the same path," he added.

On Qatar's activity in Gaza, a politician from the Strip who works as a diplomat abroad said Qatar has worked to sow discord between rival Palestinian groups Fatah and Hamas, as well as thwart Egypt's attempts to broker internal reconciliation in Palestine.

The official said Cairo also accuses Hamas of harming its interests by sponsoring the digging of tunnels and arms smuggling along the Egyptian borders, as well as training militants who have carried out terror attacks in Sinai, including the assassination of Egyptian prosecutor-general Hisham Barakat in 2015.

The jihadist Salafists groups, including for example the Omar Hadid Brigade group, are the Daesh affiliate in Gaza. While Gaza's Daesh affiliate is thought to be communicating with its counterpart in neighbouring Sinai, a February 2016 message by a Daesh militant to the group's leadership suggests otherwise.

The message to Daesh leader Abu Bakr Al-Baghdadi sent by Daesh fighter Abu Abullah Al-Mohager criticised the group's affiliate in Egypt for cooperating with Hamas, which the Gaza affiliate deems "apostate", and for pursuing fighters in Gaza.


Al-Mohager said that Hamas manufactures clothes, explosives and communication devices for Ansar Beit Al-Maqdis in Gaza, and provides its militants with medical care in Gaza’s hospitals, even hosting them for meals in the houses of the group’s top leadership.

In return, Ansar Beit Al-Maqdis provides Hamas with weapons, the Sinai group has expertise in using smuggling routes in Libya, Sudan and Egypt.

Ansar Beit Al-Maqdis also depends on Hamas for arms, explosives and equipment, as the two groups have direct and ongoing lines of supplies.

Additionally, Hamas’ military wing, the Qassam Brigades, manufactures explosives for Ansar Bait Al-Maqdis, though it does not emblazon its logo on products made for Ansar Beit Al-Maqdis.

Cairo has presented evidence of Qatar's activity in the region to Saudi Arabia and the UAE of military operations by Qatar and Turkey in central Libya to thwart a deal sponsored by Cairo and Abu Dhabi between Libya's eastern military commander Khalifa Haftar and the head of its UN-backed government Fayez Al-Sarraj to hold elections early next year.

However, Gulf countries were not entirely convinced with the evidence offered by Cairo, except for the UAE, which at the time believed that Doha's backing of the Brotherhood posed a threat.

For Saudi Arabia, it needed to work together with the Islah Party — a political movement that includes Yemen's branch of the Sunni Islamist Muslim Brotherhood — in its fight against Yemeni Shia Houthi fighters and their main ally, ex-president Ali Abdullah Saleh.

With Qatar insisting on maintaining good ties with Iran, the security threat to the Gulf countries has spiked in conflict areas in Syria, Iraq and with Lebanon's Hezbollah.

This was shown in April during the process to release Qataris kidnapped in Iraq, who included members of the royal family, the reciprocal evacuation deal of Syrian civilians from four besieged towns, Al-Foua and Kefraya, Zabadani and Madaya, which followed discussions with Iran's' Revolutionary Guard officials, and the earlier abduction of Lebanese policemen in Arsal that ended with Qatari mediation with Daesh kidnappers.

What's more, the UAE uncovered clandestine ties between Houthis and Doha, which secretly received a Houthi delegation to talk about moves in Yemen in favour of Tehran.

Other Arab countries recently began supporting Cairo's anti-Qatar push. This was evident in Saudi King Salman's response to El-Sisi's speech during the May Arab-Islamic-American Summit in Riyadh when the monarch called for taking a stance against terrorism-supporting countries, telling El-Sisi, "We are with you and we support you."

But sources said that Egypt did not forecast that Gulf countries would swiftly move to take such measures against Qatar. This followed a visit to Cairo by Saudi Foreign Minister Adel Al-Jubeir and a trip by Sudanese Foreign Minister Ibrahim Ghandour to mend what Doha has damaged in relations with Cairo.

Sudan, an active player in the Saudi-led coalition fighting in Yemen, has not undertaken a similar move against Qatar, something that indicates strong mutual interest between the two countries.

More ramifications of the Gulf crisis are expected to follow.