The dramatic steps taken against [the Qataris] over the past few days are thus hardly surprising, but they shed some light on the present stage in the struggle for regional hegemony. 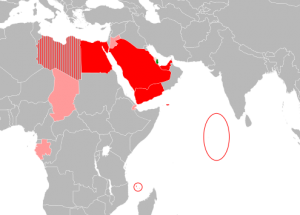 EXECUTIVE SUMMARY: In the Middle East “game of camps”, the Qataris have been playing a dangerous game for years. They have provocatively supported the Muslim Brotherhood and actively promoted the destabilization of existing regimes, using huge sums of money as well as the pernicious influence of Al Jazeera TV. The dramatic steps taken against them over the past few days are thus hardly surprising, but they shed some light on the present stage in the struggle for regional hegemony.

Sheikh Tamim’s recent tweet urging a soft line towards Iran might be authentic (as the Saudis say) or a deliberate hoax (as the Qataris were quick to claim), but the subsequent onslaught against Qatar has little to do with Iran. Qatar is no Iranian proxy: in practice, the Qataris finance anti-Iranian forces in Syria and joined the anti-Houthi war in Yemen.

The driving force behind the present crisis lies elsewhere. The “camp of stability,” led by Saudi Arabia and Egypt, is now consolidating its ranks. Qatar and Turkey are particularly obnoxious from an Egyptian point of view, as the war they are fighting by proxy in Libya continues to escalate. In keeping with President Trump’s blunt message to “Drive. Them. Out.”, Egypt is no longer willing to tolerate ambiguity towards terror groups and Islamist forces.

With the collapse of IS in both Mosul and Raqqa now within sight, it is all the more important to ensure that the Muslim Brotherhood and its regional allies not be in a position to benefit on the ground. The best outcome – for both the US, which still relies on Qatar’s huge Udayd AFB; and for Israel, given that it is mainly Qatari money that now keeps Gaza from descending into a humanitarian disaster (and possibly another round of violence) – would be for Qatar to truly change course. This would entail permanently shutting down all support for terror infrastructures while maintaining a commitment to humanitarian needs. Given Qatar’s vulnerabilities, such a goal may well be within reach.

For those familiar with the “game of ideological camps” that has been raging across the region since 2011, there is nothing surprising about the intense eruption of vitriol aimed at Qatar over the past few days. The Qataris, who are ideologically oriented towards the Muslim Brotherhood, have vast resources at their disposal: in addition to gas revenues, their sovereign funds hold a range of profitable assets, from the Printemps Department Stores to the Barcelona Football Club. Throughout these years of turmoil, Qatar has been using those resources together with its media arm, Al Jazeera TV, to undermine the stability of moderate forces in the Arab world, glorify Hamas, and justify acts of violence and subversion. Qatar has thus earned the anger and frustration of its worried neighbors.

But what was the specific trigger that drove Qatar’s irate Arab neighbors to take action so much more aggressive than in 2014, when they forced the Al Thani ruling family to stop harassing Sisi’s regime in Egypt or at least tone down Al Jazeera’s frontal assault?

The direct cause cited by the Saudis and their allies seems bogus: a tweet, presumably sent by Emir Sheikh Tamim, calling for a better relationship with Iran (and thus contradicting the spirit of the Riyadh summit). The Qataris hastened to argue that the whole thing was a hoax. Even if genuine, however, the tweet hardly establishes Qatar as an Iranian proxy.

Huge sums of Qatari money have flooded the coffers of Iran’s sworn enemies in the Syrian war; and the Qataris lined up with their GCC colleagues to fight against the Iranian-sponsored Houthi uprising in Yemen. True, they seemed less than enthusiastic about the shrill anti-Iranian tone in Riyadh – but their affiliation, throughout this period of regional rivalries, has been with the Brotherhood and its offshoots, such as Hamas. It has worked against rather than with the Iranian camp, often in tandem with Erdoğan’s Turkey, to promote the Ikhwani (“Brotherly”) agenda.

It is precisely this affiliation that sets Qatar apart from the other five GCC members. (On Iran, it is actually Oman that is closer to Tehran: it served as the Iranians’ conduit to the Obama administration and hosted their secret channel.) In the four-way tug of war for hegemony in the region – the game of camps, revisited – several things have occurred that made it urgent for the “forces of stability” to bring Qatar to heel.

First of all, the camp is closing ranks after a long period of tension between Saudi Arabia and Egypt over the Red Sea islands and over policy issues in Yemen and Syria. The Saudis’ support is vital for Egypt’s ailing economy, but Egypt’s security and stability are equally important for the camp as a whole. Hence the need to stand together with Sisi in the escalating fight against Qatar’s region-wide backing of the Muslim Brotherhood, Sisi’s sworn enemy.

A brutal war by proxy is now underway in what was once Libya. Brotherhood-affiliated elements dominate the internationally recognized government in Tripolitania (the west) and are being pushed back in central Libya by the forces of the self-styled Libyan National Army under Egypt’s ally, “Field Marshal” Khalifa Haftar. Now that the Trump visit has put fresh wind in their sails, the time has come to use this new clout to pry Qatar, brutally if necessary, out of the Brotherhood camp and forcibly draw it into the pro-Saudi lineup.

Moreover, the ground is shifting, regionally and globally, on the question of support for terrorist groups. There has never been any doubt that Qatari largesse often ended up, deliberately or as the result of loose controls, in the wrong hands. Against the background of the horrors in Manchester and London, the pride taken in butchering children, the overall level of tolerance for terrorists of any color – including Hamas – is now near zero, as Trump made clear in both Riyadh and Bethlehem (where he berated the Palestinian Authority in public for its position on incitement). What was once dismissed as a necessary evil is no longer being rationalized away. The Qataris are running out of excuses, and reports of Hamas terror operatives being shipped off (to Malaysia?) suggest that the pressure might be bearing fruit.

Finally, the sense of urgency may reflect positioning in anticipation of the approaching drama as IS faces its endgame in Mosul and Raqqa. The impending doom of the so-called Caliphate is probably the reason behind their aggressive push to terrorize Europe (perhaps fueled by the memory of how a massive terrorist massacre shamefully brought Spain out of the US-led coalition in Iraq, when the Socialists won the election after the Madrid train bombings on 11 March 2004).

Once IS is obliterated and the so-called Khalifa, “Abu Bakr al-Baghdadi” (not his real name) is subjected to typical Iraqi retirement benefits, the main question in both Syria and in Iraq will be this: will the Iranian “camp” be able to consolidate a contiguous corridor under its control from Iran to the Mediterranean, or will the “forces of stability”, with Jordan in a highly sensitive role, be able to prevent this from happening? The prospect of decisive struggles ahead is one more reason for the Saudi-led camp to shore up its position by reducing the room for maneuver hitherto enjoyed by some of its rivals in the Sunni Arab world.

This robust power play by America’s allies (who are also Israel’s partners in the camp of stability, broadly defined) poses challenges as well as strategic benefits. The US Air Force cannot replace its facilities in Qatar overnight, and would in all likelihood press the administration to avoid a total breach with Doha. Overall, American policy is likely to focus on obtaining from Qatar the sort of visible policy changes that would make it possible to lift the ban as soon as possible.

For Israel, the Qatari ambition to manage the situation in Gaza is a threat. As was manifest during the fighting in 2014, it was in Cairo, not in Doha (or Ankara), that Israel wanted the endgame to be arranged. Still, the Qatari flow of funds to Gaza is welcomed, insofar as it is used to stave off the possibility of a humanitarian crisis.

Again, the best outcome would not be for Qatar to be ousted altogether, but to draw a clearer distinction between harboring terror networks (which must end forthwith) and lending economic support to a needy population.


Col. (res.) Dr. Eran Lerman is a senior research associate at the BESA Center, and former deputy for foreign policy and international affairs at the National Security Council. He is also a member of the faculty at Shalem College.