Why does SFSU partner with an institution where violence towards Jews is routinely encouraged?

If you haven't already, please click here to sign a petition calling for San Francisco State University (SFSU) to end its Memorandum of Understanding (MOU) with An-Najah University in the West Bank. If you've already signed, please share the petition with others. 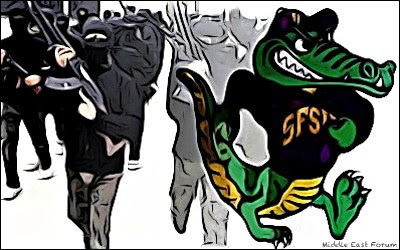 At a time of rising concern about antisemitism on American college campuses, should a California state university maintain an official partnership with a Palestinian institution where hatred and violence towards Jews is encouraged?


Shockingly, this is happening at San Francisco State University (SFSU) — which has a Memorandum of Understanding (MOU) with An-Najah University, a Palestinian hotbed of antisemitism and radicalism in the West Bank.


At the Middle East Forum, we have launched a campaign to end SFSU's MOU with Najah University. Meanwhile, the Lawfare Project is filing a lawsuit against SFSU alleging "a long and extensive history of cultivating antisemitism and overt discrimination against Jewish students." The lawsuit names the Najah MOU and its architect — anti-Israel activist and professor Rabab Abdulhadi — as among the reasons for the increasing antisemitism on campus (see page 56).

In her response to these claims, Abdulhadi proves their accuracy by lambasting SFSU's Department of Jewish Studies, Hillel, and the Jewish Community Relations Council (JCRC), while championing "terrorist university" Najah, without addressing the charges against it.


It was largely due to SFSU's partnership with Najah that the Algemeiner placed SFSU tenth on its 2016 list of "The 40 Worst Colleges for Jewish Students." As Algemeiner editor Dovid Efune put it: "If you can imagine for a second what it's like to be a Jewish student on this campus and know that there is a formal agreement with an institution that has hosted terrorism . . . it's going to leave you feeling uncomfortable."

The Palestinian university's reputation for promoting terrorism and antisemitism — a reflection of a wider Palestinian society steeped in hatred for Israel and Jews — is well-known. According to Matthew Levitt, director of the Washington Institute for Near East Policy's Stein Program on Counterterrorism and Intelligence, Najah is notorious for the "terrorist recruitment, indoctrination, and radicalization of students." Hamas describes Najah as a "greenhouse for martyrs," while the Anti-Defamation League (ADL) notes that its student council "glorifies suicide bombings and propagandizes for jihad against Israel."


The following is just a sampling of Najah's poisonous environment:

SFSU's partnership with Najah is thanks to Abdulhadi, a professor who has devoted her career to demonizing the world's lone Jewish state and under whose influence campus antisemitism has progressively worsened. Is it any wonder that Jewish students feel unsafe?


Little will change at SFSU until this dangerous and despicable MOU is ended.


Cinnamon Stillwell is the West Coast Representative for Campus Watch, a project of the Middle East Forum. She can be reached at stillwell@meforum.org.