Israel hears nothing, says nothing about Palestinian love fest in Gaza - debkaFile


It is feared that Israel’s passivity on matters of the highest concern to its security and international standing is becoming a permanent fixture of Netanyahu’s policy-making. 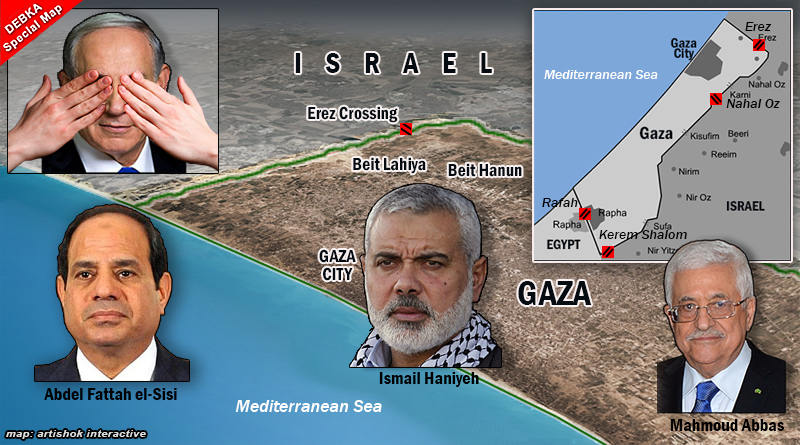 There was deep satisfaction in Cairo and Washington over the warm smiles and cordial handshakes marking the ceremonial handover of the Gazan administration from Hamas to the Fatah-dominated Palestinian Authority on Monday, Oct. 2, after a decade of bitter enmity.

Egypt, father of the reconciliation, and the United States, were favorably impressed by the ecstatic welcome accorded Palestinian Prime Minister Rami Hamdallah and his retinue of dozens of high officials from Ramallah, when they crossed into the Gaza Strip after passing through Israel.

But US President Donald Trump’s Middle East envoy, Jason Greenblatt, sounded a cautious note when he tweeted the next day: “The US is watching developments closely with the aim of improving humanitarian conditions in Gaza,” he said. “The United States stresses that any Palestinian government must unambiguously and explicitly commit to nonviolence, recognition of the State of Israel, acceptance of previous agreements and obligations between the parties, and peaceful negotiations.”

By this message, Greenblatt touched on the main the sticking points still ahead of Palestinian unity negotiations.

And so, while the festivities continued in the streets of Gaza, the lead players closeted themselves behind tightly closed doors to start thrashing them out.

American, Egyptian and Palestinian officials were exceptionally tight-lipped about the proceedings. However, DEBKAfile’s sources learned that the Hamas negotiators immediately slapped down the most explosive item  in the path of the handover of government to the Palestinian Authority: the disposition of its military arm and large weapons arsenal.

Hamas presented a pre-prepared plan for resolving the issue. Its military arm, Ezz e-din al-Qassam, would be seconded as a separate entity to the Palestinian Authority’s security brigades. This arrangement would grant Qassam a status partly modeled on that of the Popular Mobilization Units – PMU, which has been attached to the Iraqi army while taking its orders from Iran’s Revolutionary Guards Corps.

In a word, Qassam would continue to serve Hamas as an autonomous army.

This plan was flatly rejected by Prime Minister Hamdallah. But knew it was coming. A day earlier, our sources reveal, Abbas and Egyptian Intelligence Minister, Gen. Khaled Fawzi, met in the Jordanian capital Amman and agreed it was unacceptable.

The Palestinian leader implied as much in an interview Monday when he said: “We will never accept a entity like Hizballah in Gaza; nor allow any other nation to interfere in Palestinian affairs, barring Egypt.”

The first round of formal negotiations to bury the hatchet between the two Palestinian factions therefore ended in a standoff. Hamas leaders later complained they did not get the chance to raise the most burning issue for them, which was the lifting of sanctions the PA had imposed on the Gaza Strip. Its cutoff of funds to Hamas keeps the population painfully short of such basic needs as electricity.

The next round of talks is scheduled to take place next week in Cairo.

While Egypt and the US are powering the Palestinian reconciliation process, Israel has no say. Behind the scenes, Israel has been helpful with the technical arrangements. Prime Minister Binyamin Netanyahu, for instance, directed the IDF to allow the delegation from Ramallah to pass through Israel and enter the Gaza Strip through the Erez crossing, and return by the same route.

He also instructed government members to refrain from commenting on the historic Fatah-Hamas get-together in Gaza. Netanyahu explained in confidence that his policy is to hear nothing, see nothing and say nothing on the subject because, at long last, after years of frozen immobility, the Palestinians Authority has finally roused itself and made some political move. While he does not expect anything much to come of it, he would not want to give the Americans or the Egyptians any cause to blame Israel for tripping it up.

This stance has raised some criticism, on the grounds that Israel can’t afford to stand by and hold silent, when new facts are being established against its interests and they may prove to be irreversible down the road.

While Cairo keeps Israel in the picture on the state of negotiations between Ramallah and Gaza and the directions they are taking, it is feared that Israel’s passivity on matters of the highest concern to its security and international standing is becoming a permanent fixture of Netanyahu’s policy-making. He adopted the same non-interventional posture in the Syrian civil war.

DEBKAfile’s sources report that the complex Gaza issue in relation to overall Israel policy has never been thoroughly debated by the Netanyahu government, or even by the security and foreign policy cabinet.