How the IDF Is Preparing for Multi-Front War - Yaakov Lappin


According to Israeli intelligence assessments, none of Israel’s enemies wants a full-scale war any time soon (and neither does Israel), but the growing tension in the region means incidents can quickly escalate. 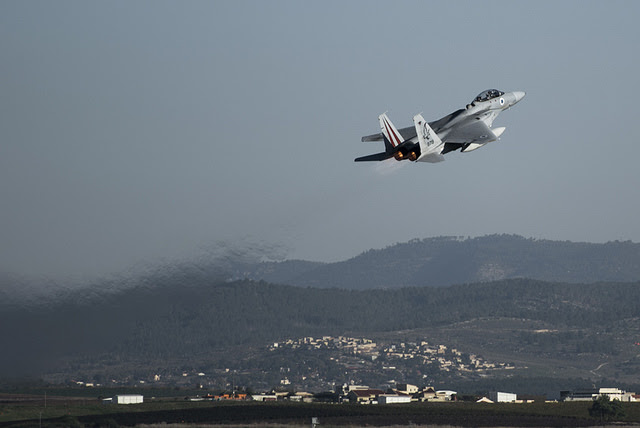 EXECUTIVE SUMMARY: The IDF is implementing a plan to improve its ability to operate on multiple battle fronts simultaneously. While there is no indication that any one of Israel’s enemies is interested in initiating a full-scale war in the near future, the growing explosiveness of the region means that any tactical incident can snowball and turn into an unintended armed conflict very quickly – and one front can ignite others.

An Israel Defense Forces (IDF) plan designed to get it prepared for the challenge of multiple-front warfare is entering its third year.

The ability to operate effectively on multiple battle fronts simultaneously will be crucial for Israel’s ability to deal with unpredictable, explosive events that can begin on one front but quickly spread to others. According to Israeli intelligence assessments, none of Israel’s enemies wants a full-scale war any time soon (and neither does Israel), but the growing tension in the region means incidents can quickly escalate.

During a speech given to the Interdisciplinary Center in Herzliya at the start of January, IDF Chief of Staff Lt.-Gen. Gadi Eisenkot identified the five fronts that pose threats to Israel’s security.

He noted that a “big, strong Iranian umbrella is hovering” over all five of these sectors. The first is Lebanon, where Hezbollah, with Iranian assistance, has built up a major capability. Based on a relatively simple concept, Hezbollah’s assets in Lebanon are designed with strong layers of defense around them, combined with an ability to heavily strike the Israeli home front with projectiles. This is a model the Iranian Republican Guards Corps (IRGC) and Hezbollah believe can challenge Israel’s military superiority.

Eisenkot named the second front as Syria, which has undergone drastic changes over the past year. Members of a Russian-led coalition, consisting of Iran, the Assad regime, Hezbollah, and Shiite militias, view themselves as the victors in Syria’s conflict and seek a presence on the Golan Heights. Iran has plans to establish an air, ground, and naval presence in Syria. “The danger to us is significant,” Eisenkot said.

The West Bank forms the third threatening sector. Hamas seeks to orchestrate terror attacks from there and divert “fire” away from Gaza, which it rules. Unorganized terrorism and ISIS-inspired lone attackers remain threats here too.

Gaza is the fourth sector. In the Gaza Strip, Hamas and other armed Palestinian factions have built up terrorist guerilla armies, armed with arsenals of projectiles. These forces are embedded in a densely populated urban jungle.

The Sinai Peninsula, where ISIS remains highly active, is the fifth sector.

Beyond the five fronts, Iran to the east – its nuclear ambitions and regional hegemony efforts – continue to threaten Israel.  The potential of reaching a high level of escalation “is immediate,” Eisenkot cautioned.

The IDF’s preparations for multiple-front war rest on several capabilities. The first is Israeli intelligence supremacy. This gives the military a high-quality picture of enemy assets and activities and the ability to launch mass, precision strikes in the event of a war. The second key capability is robust air power.

During a speech delivered to the Institute for National Security Studies (INSS) in 2017, former Israel Air Force Chief Maj.-Gen. Amir Eshel stated that Israel’s air power remains its most generic military force, giving it the flexibility to deal with multiple fronts quickly and simultaneously.

“Speed – physics – still has a significance,” Eshel said. Threats, whether asymmetrical forces or older classical enemy divisions, can appear in bordering areas, or thousands of kilometers away. “When these approach, they can become a big problem. The solution of air power… arrives within minutes to hours,” Eshel said.

With no other military force able to respond this quickly, the IAF remains Israel’s first port of call in multiple-front warfare. Eshel said the IAF must be able to operate in three main sectors simultaneously, presumably referring to the north (Lebanon and Syria), the south (Gaza), and the east (Iran).

“In the morning, aircraft can be over the northern front. By noon, they can be to the east, thousands of kilometers away. And in the evening, they could be operating over Gaza. No other force can do this,” he said.

The IAF is structuring itself to deal with symmetric and asymmetric threats, near and far, all at the same time. In addition, the idea of a preemptive strike, if necessary, is making a return to military high command due to new air capabilities.

The IAF’s strike rate has “doubled twice” in recent years, Eshel said, meaning that several thousand targets can be hit within 24 hours, every 24 hours. This degree of air power is unprecedented in military history.

The days in which the IDF relied mainly on air power to wage a full-scale conflict are long gone. In line with the IDF’s multi-year plan, a major effort is underway to improve war readiness among ground forces. This year, enlisted operational forces are set to begin training for 17 weeks to match every 17 weeks of active security missions. This division of labor is designed to bump up combat readiness significantly, and not to let routine missions erode combat readiness.

In addition, the IDF has been creating light infantry brigades and deploying them to the borders with Egypt and Jordan. Their mission is solely limited to border security, thus freeing up enlisted combat forces, which would take part in ground maneuvers, for more war training.

To counter the threat of armor-piercing RPGs and anti-tank missiles, which are highly prevalent in Gaza and Lebanon, the IDF is mass producing modern armored personnel carriers (APCs) and tanks. These are the tracked Namer and the wheeled Eitan APCs. The latter can travel 90 kilometers an hour on roads, giving it the ability to leap from one battle front to another.

Israel is also mass producing the Merkava 4 tank. On all these platforms, the Defense Ministry is installing Rafael’s Trophy active protection system. This gives the armored vehicles the ability to intercept incoming missiles and to instantly detect and share the location of enemy cells that are firing at them, enabling rapid, accurate return fire.

As the IDF strengthens its ground war abilities, various command levels are training to improve their ability to launch multi-front attacks simultaneously.

The end goal of multi-front combat

The IDF’s official strategy, published in August 2015, states that the goal of such an effort would be to force the enemy to agree to a ceasefire or diplomatic solution from an Israeli position of strength that follows a military victory.

Forcing enemies into a position where they are unable or unwilling to continue fighting is the objective. Tactically, this means removing enemy capabilities and motivation to fight, destroying its forces, decreasing its ability to fire on the Israeli home front, hitting targets perceived as valuable by the enemy, and employing cunning approaches to hit the enemy’s weak spots.

These are designed to shock and surprise, and to harm enemy decision making, according to the strategy.

The IDF’s object is to achieve these goals as quickly as possible after the outbreak of large-scale conflicts. Launching an immediate ground offensive, seizing areas, and reducing fire from these territories on Israeli-populated areas is the main way to achieve this.

The mission of the ground forces will be to capture and destroy military infrastructure and harm the survivability of enemy governments over their areas, according to the IDF’s strategy.

This will be accompanied by large-scale air strikes.

The Israel Navy would have an important role to play in such a scenario.  The missile ship and submarine fleets, both of which are being modernized, can act as intelligence gatherers off enemy coastlines and as firepower platforms that can launch shore-to-surface guided missiles.

Covert special forces would presumably conduct elite missions behind frontlines in this scenario.  A digital, network-based military command system, able to share battlefield data and intelligence in seconds, is currently being developed. This network will enable IDF branches – air, sea, and ground – as well as the Military Intelligence Directorate to integrate their activities in new ways.

Aside from these preparations, the IDF is also working on its ability to launch continuous air-based and special forces operations against threats that do not border Israel.