Gaza's terrorist rulers make no secret of their agenda. They are out to destroy Israel. Suicide bombers, rockets, and tunnels have failed. So now it's mass marches on the border 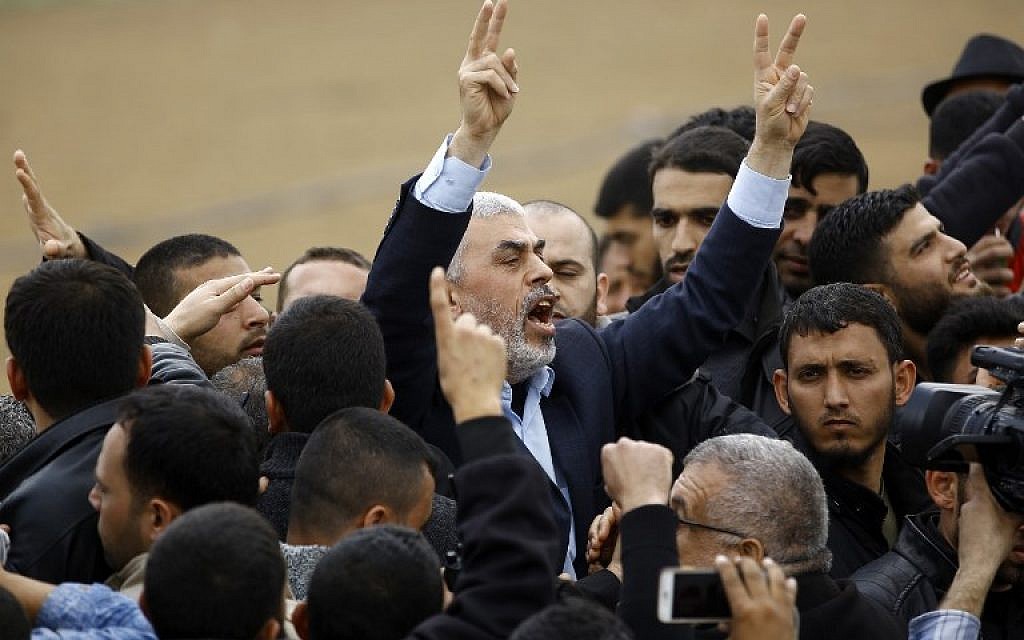 Islamist Hamas terror group leader Yihya Sinwar shouts slogans and flashes the victory gesture as he takes part in a protest near the border with Israel east of Jabaliya in the northern Gaza Strip on March 30, 2018. (AFP/ Mohammed ABED)
Just in case anybody forgot, Israel unilaterally withdrew from the Gaza Strip to the pre-1967 lines in 2005. It uprooted thousands of Israeli settlers from their homes. It dismantled all military infrastructure in the Strip. It has no physical presence there. It makes no territorial claims there.

Just in case anybody forgot, Hamas, an Islamist terrorist organization that avowedly seeks the destruction of Israel, seized power in Gaza in 2007 in a violent takeover from the forces of Palestinian Authority President Mahmoud Abbas. 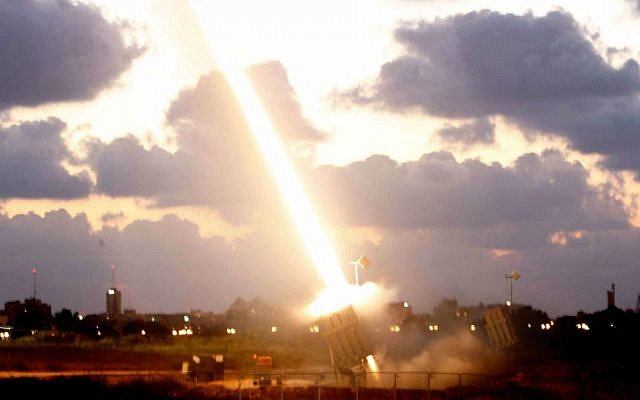 An Iron Dome Missile Defense battery set up near the southern Israeli town of Ashdod fires an intercepting missile on July 16, 2014. (Miriam Alster/Flash90)
Were it not for the Iron Dome rocket defense system, much of Israel would, as Hamas had hoped, have been reduced to rubble.

Hamas has also been incessantly digging attack tunnels under the border — another terror avenue that Israel appears to have gradually been closing off with new technology and underground barriers. 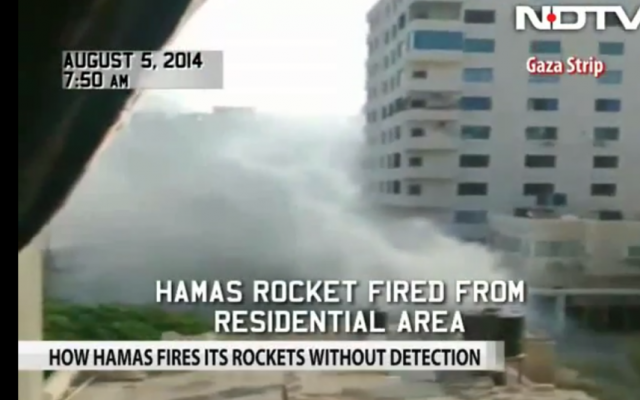 Indian TV crew films Hamas rocket launch from Gaza City residential area, August 5, 2014
(NDTV screenshot)
Just in case anybody forgot, Hamas has cynically and relentlessly exploited Gazans — a large proportion of whom have supported it in elections — by storing its rockets near or even inside mosques and schools, firing rockets from residential areas, and digging tunnels from beneath homes and civilian institutions. It has subverted all materials that can be utilized for the manufacture of weaponry, necessitating a stringent Israeli security blockade whose main victims are ordinary Gazans.

Organizing and encouraging mass demonstrations at the border in the so-called “March of Return” to face off against Israeli troops, while sanctimoniously and disingenuously branding the campaign non-violent, is merely the latest iteration of Hamas’s cynical use of Gazans as the human shields for its aggression.

Just in case anybody forgot, demanding a “right of return” to Israel for tens of thousands of Palestinian refugees and their millions of descendants is nothing less than a call for the destruction of Israel by demographic means. No Israeli government could accept this demand, since it would spell the end of Israel as a Jewish-majority state. Israel’s position is that Palestinian refugees and their descendants would become citizens of a Palestinian state at the culmination of the peace process, just as Jews who fled or were forced out of Middle Eastern countries by hostile governments became citizens of Israel. 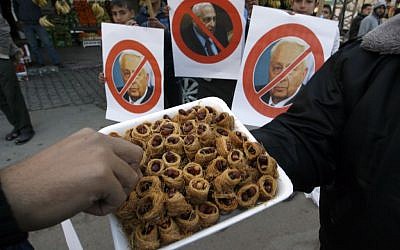 Palestinians hand out sweets as they celebrate the passing of former Israeli prime minister Ariel Sharon in Khan Younis in the southern Gaza Strip, January 11, 2014.
(photo credit: Abed Rahim Khatib/Flash90)
Just in case anybody forgot, the late prime minister Ariel Sharon oversaw the wrenching withdrawal from Gaza out of a declared desire to set Israel’s permanent borders, and did so unilaterally because he concluded that he could not reach a negotiated agreement with the Palestinian leadership. Had Gaza remained calm, and Sharon remained healthy, it is likely he would have ordered a pullout from much of the West Bank as well — paving the path to Palestinian statehood.

The rise of Hamas to power in Gaza, three rounds of bitter conflict, and an awareness that Israel would be isolated and unable to function if Hamas were to take over in the West Bank — with every location nationwide, notably including the airport, within range of rudimentary rockets — have buried unilateralism and rendered Israelis consensually terrified at the prospect of relinquishing adjacent territory. Thus Hamas, which purports to serve the Palestinian interest, doomed the prospect of Palestinian independence for the foreseeable future.


Organizing and encouraging mass demonstrations at the border in the so-called “March of Return” to face off against Israeli troops, while sanctimoniously and disingenuously branding the campaign non-violent, is merely the latest iteration of Hamas’s cynical use of Gazans as the human shields for its aggression.

But Hamas, of course, is not interested in Palestinian independence. Again, it strives for the elimination of Israel.

So, finally, just in case anybody forgets the context for Friday’s latest escalation of violence, they need only listen to Hamas’s Gaza chief Yahya Sinwar setting out the ultimate goal.  As he put it in an address to Gazans at the border on Friday, “The March of Return will continue… until we remove this transient border.” The protests “mark the beginning of a new phase in the Palestinian national struggle on the road to liberation and ‘return’… Our people can’t give up one inch of the land of Palestine.” 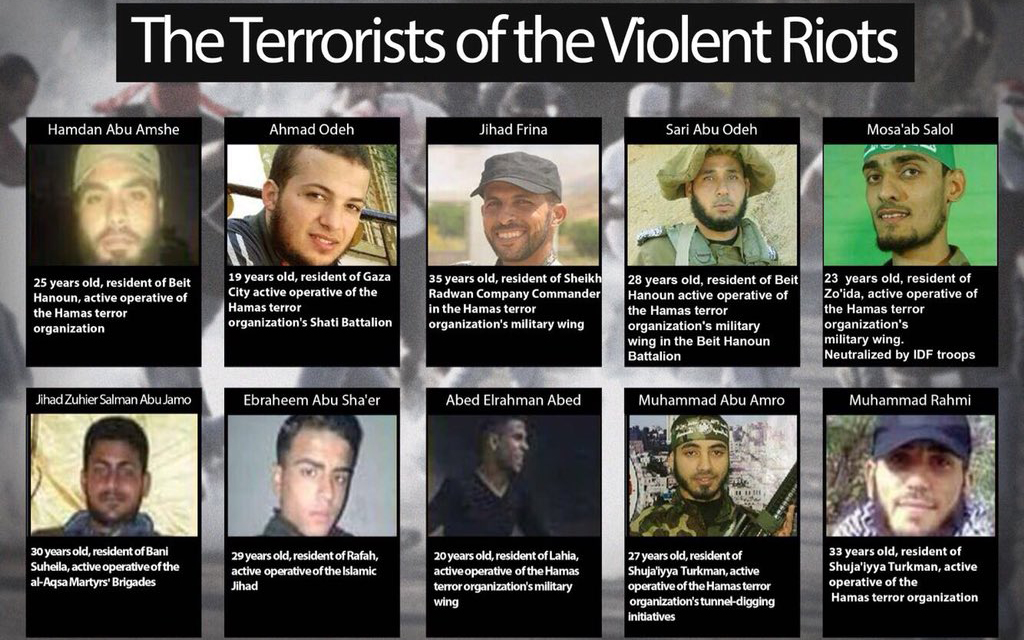 Fatalities from the March 30 violence on the Israel-Gaza border identified by Israel as members of terror groups. (Israel Defense Forces)