by Itamar Marcus and Maurice Hirsch


The following is PMW's report, prepared for the US Secretary of State, which shows that the PA has failed to implement the conditions set in the Taylor Force Act.

By Itamar Marcus and Maurice Hirsch

Re: The Taylor Force Act - Certification of the Secretary of State

Failure of the Palestinian Authority to fulfill the requirements of TFA


Section 4 of the Taylor Force Act (TFA), passed on March 23, 2018, requires that the Secretary of State certify that the Palestinian Authority (PA), the Palestine Liberation Organization (PLO) and any successor or affiliated organization "are taking credible steps to end acts of terrorism"; "have terminated payments for acts of terrorism"; "have revoked any law, decree regulation or document authorizing or implementing a system of compensation for imprisoned individuals"; and "are publicly condemning such acts of violence" or face a limitation on the US aid provided to the PA.

In the report, PMW shows that the PA and its leaders entirely rejected, and continue to reject, the actions required by them under section 4 of the TFA.

Action requirement I: Credible steps to end acts of violence

Since the passage of the TFA, the PA media has not reported any steps to end acts of violence by Palestinian terrorists against Israeli and American citizens. On the other hand, it has continued to glorify and honor terrorists. (See Action requirement IV, below)

Action requirements II + III: Termination of payments for acts of terrorism and revocation of the Prisoners' Law and ordinances

Just days following the passage of the TFA, the Palestinian Authority publicized the PA budget for 2018, which had recently been approved by Mahmoud Abbas. PMW's analysis of the budget demonstrated that the PA had not fulfilled the terms of TFA and were continuing to pay salaries to terrorists and allowances to families of "Martyrs". In fiscal year 2018 the PA allocated 550 million shekels ($158 million) for the payment of salaries to terrorist prisoners and released terrorists and 687 million shekels ($197 million) were allocated to the payments to families of "Martyrs" and wounded.

Most significantly, in an act of complete and open defiance of the TFA, the PA stopped attempting to hide that it is the PA that pays salaries to all the terrorist prisoners. In its 2018 budget, for the first time since 2014 when it attempted to deceive the international community, the PA now openly lists the sums allocated for these salaries to the Commission of Prisoners' Affairs as a direct PA budgetary expense. PMW's report regarding the PA's 2018 budget is attached as annex 1.

Even before the TFA was signed into law and before the PA demonstrated its rejection through its budget, the PA publicly announced that it rejected the demands of the TFA:

a)    PA Chairman Mahmoud Abbas to the PLO Central Council:


"There is something that the Americans are telling us to stop - the salaries of the Martyrs and the Martyrs' families. Of course, we categorically reject this. We will not under any circumstances allow anyone to harm the families of the prisoners, the wounded, and the Martyrs. They are our children and they are our families. They honor us, and we will continue to pay them before the living."


b)    Director of Commission of Prisoners' Affairs Issa Karake:


"I'll quote [PA] President Mahmoud Abbas: ... 'Until the last day of my life, we won't stop this support. It's important' ... The family of every Palestinian prisoner receives social aid. We're proud of this, not ashamed of it, and we say this openly, because it's our national, human, and moral obligation, and the obligation of the struggle. It is supported by the Palestinian leadership and by the Palestinian government."


Since the passage of the TFA, the PA has not terminated its payments rewarding acts of terror or revoked the laws and ordinances that implement its program.

The opposite is true. Statements of senior PA officials, including statements attributed to PA Chairman Mahmoud Abbas himself, clearly show that the PA is defying the United States and will not terminate these payments:


"The [PA] government's rejection and condemnations of Congress' conditioning the continuation of the American aid to the Palestinian state's institutions on the Martyrs' (Shahids') and prisoners' allowances (mukhassasat) being stopped...." The spokesman continued "In the eyes of our people, our nation, and our cause, the Martyrs and prisoners are sacred symbols of freedom, struggle, protecting human dignity, and resistance to submission and humiliation. All of these titles are noble titles, and an anchored right of all humans, which cannot be bought or sold for any fortune in the world."


"The salaries of the Martyrs' families and the prisoners cannot be subjected to American political extortion. He added that the leadership attaches great importance to this matter, as these are freedom prisoners who fought for statehood and independence."

Paraphrased by the PA daily]


c)    The PA Ministry of Information:


"The American Congress' demand to stop paying the Martyrs' (Shahids') and prisoners' allowances (mukhassasat) in return for the continuation of the aid to the institutions of the Palestinian state is a continuation of the political extortion, extremism.... The ministry emphasized that the freedom Martyrs and our brave prisoners are not highway robbers or gang members, but rather one of the elements of the legitimate resistance to the occupation."

Paraphrased by the PA daily]


d)    Head of the PLO General Commission in the US Husam Zomlot:


"The Palestinian leadership is committed to the rights of the families of the Martyrs and the prisoners, is committed to letting them live in dignity, and will not submit to financial extortion. He emphasized that the Palestinian people's legitimate rights are not for sale." The PA daily further quoted a statement from PA Chairman Mahmoud Abbas' Fatah party which said that it 'is not at all surprised by the American Congress' latest decision, which connects the American aid with stopping the financial aid to the families of the prisoners and Martyrs (Shahids).' The movement emphasized that our brave prisoners and heroic Martyrs fought for freedom and independence, and that the rights of their families are not up for bargaining or negotiation..."


"US President Donald Trump's signing of that which is called the '[Taylor] Force' Act... constitutes a strengthening of the political blackmail, and a continuation of the hostility towards our people from Washington, its denial of our legitimate rights, and its rebellion against international law."


"The fact that the US has stopped the aid to UNRWA (UN Relief and Works Agency for Palestine Refugees in the Near East), threatened to stop the aid given to the PA, and
conditioned it on stopping payment of the salaries to the Martyrs' (Shahids') families and to the prisoners will only increase the determination of the Palestinian people and its adherence to the national rights."


g)    PA Minister of Justice Ali Abu Diyak (representative of PA Prime Minister Rami Hamdallah at the opening of the National Association of the Families of the Martyrs of Palestine's fifth general conference):


"We will not bargain over our Martyrs' (Shahids') blood and will not exchange the promise and loyalty to the Martyrs for all the money in the world... We will not abandon the families of the Martyrs and the prisoners of freedom. The government, led by [PA] Chairman Mahmoud Abbas, will continue to fulfill its national, moral, and human obligation towards the Martyrs' families. This is despite all of the pressures exerted by the government of Israel, and despite its threats to rob and deduct the allowances of the Martyrs' families and the prisoners from our money, with the support of the American Congress that demanded to stop the allowances to the Martyrs' families and prisoners in exchange for the continued transfer of the American aid to institutions of the Palestinian state."


h)    Fatah Movement Deputy General Leader and Fatah Central Committee member Mahmoud Al-Aloul:
"The leadership opposes all of the external pressures concerning the prisoners, which Chairman Mahmoud Abbas emphasized: 'If we will only be left with a few Dirhams [a currency in some Arab states], we will allocate them to the families of the prisoners as a sign of appreciation for their sacrifice."

of performing his Presidential duties]

Since the passage of the TFA, no PA condemnations of Palestinian violence have been publicized in the official PA media.

The opposite is true, the PA and Mahmoud Abbas' Fatah party have continued to honor and glorify terrorists and their actions. April 16 was the 30th anniversary of Israel's killing arch-terrorist Khalil Al-Wazir "Abu Jihad," who the PA and Fatah have repeatedly "credited" with planning the murder of 125 Israelis.

The PA Ministry of Information, the PA in its official daily, and the official Fatah Facebook page all honored the terrorist murderer Abu Jihad this year.

a)    "The [PA] Ministry of Information marked the 30th anniversary of the assassination of the general commander of the Palestinian revolution forces and architect of the Stone Intifada (i.e., Palestinian wave of violence and terror against Israel, 1987-1993), leader Martyr (Shahid) Khalil Al-Wazir 'Abu Jihad'... It said that the death of Abu Jihad, the one of a kind military mind, is a difficult loss for Palestine, but his heritage will remain present in the pages of our history, and will remain a source of inspiration for our resistance."

Among the military operations that Abu Jihad planned:

The Savoy Hotel operation in Tel Aviv and the killing of 10 Israelis in 1975 (sic., 11 murdered); the truck bombing operation in Jerusalem in 1975 (15 murdered -Ed.); the killing of senior sapper Albert Levy and his assistant in Nablus (sic., Jerusalem) in 1976; the Dalal Mughrabi operation in 1978 in which more than 37 Israelis were killed; the bombing of the Eilat port in 1979 (sic., 1978); and the bombarding of the northern settlements (i.e., towns in northern Israel) with Katyusha rockets in 1981." 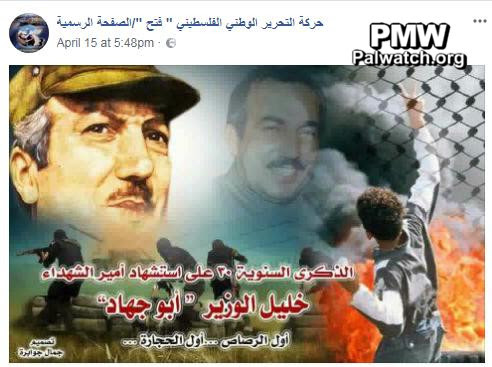 a)    The first post shows two pictures of Abu Jihad above a picture of armed men shooting rifles and a young Palestinian throwing a rock.

Text on image:
"The 30th anniversary of the death as a Martyr (Shahid) of Prince of Martyrs
Khalil Al-Wazir 'Abu Jihad'
The First Bullet, the First Stone" 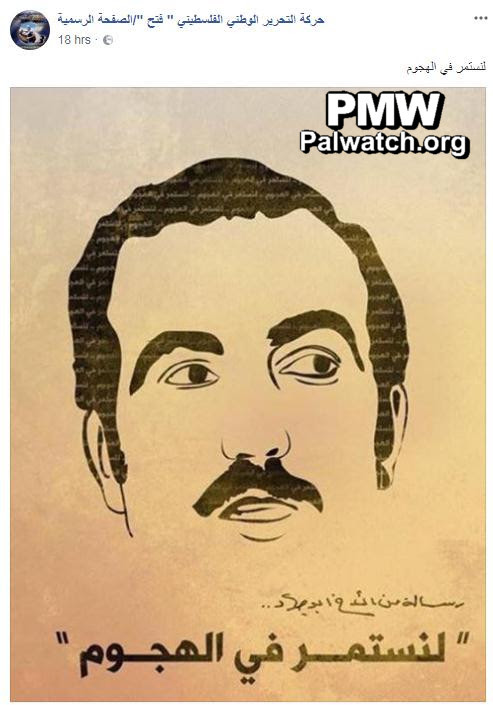 b)    The second post shows a drawing of Abu Jihad.

Text on image:
"A message from brother Abu Jihad:
'Let us continue attacking'"

Needless to say, the honoring and glorification of terrorists and acts of violence is not only deplorable, but is precisely the opposite of the TFA's requirement that the PA, the PLO and their affiliated organizations condemn terror.

The PA has not taken any actions to end its program of rewarding terrorists, has not changed the PA law mandating salaries be paid to terrorist prisoners, and does not intend to take such actions. Rather, in acts of open defiance, the PA has included salaries to Palestinian terrorist prisoners and payments to the families of so-called "Martyrs" in the 2018 budget. In addition, it has publicly stated at the highest political level that it will continue making these payments even if they have no money left for anything else.