After eight years languishing on death row on what most western leaders contend were unfounded blasphemy charges, newly acquitted Pakistani Christian Asia Bibi remains in hiding from Islamic extremists after the U.K. denied her political asylum out of fear for the safety of their consular staff in Pakistan.

The Foreign Office’s decision, made public last week, has been slammed by lawmakers, religious leaders, and other critics who have accused the office of enabling Pakistan’s hardliners to control government asylum policy.

“This is shocking. Britain has historically had a quick response to come to the aid of those suffering human rights abuses,” Wilson Chowdhry, Chairman of the British Pakistani Christian Association (BPCA) told Fox News. “But a Christian mother of five who has been exonerated has not been offered asylum.”

Unrest began last month after Pakistan’s Supreme Court overturned the charges and acquitted the 53-year-old farmworker. Immediately, protestors flooded the streets led by leaders of extremist Islamist parties, who had long been screaming for Bibi to be taken to the gallows.

As fears for Bibi's safety grew, her husband Ashiq Masih urgently requested the U.K. – as well as several other governments, including the United States – to grant the mother and her family safe haven. However, the U.K. high commissioner in Islamabad is said to have cautioned that he would not be able to protect his staff if the request was approved. Thus, the asylum case did not move forward.

William Stark, International Christian Concern’s Regional Manager for South Asia acknowledged that while there is "a real threat to the embassies of the governments involved in helping Asia and those involved in the case," he was "surprised" the U.K. would take a back seat.

The Bibi case continues to trigger both debate and safety concerns for U.K. officials. Sir Simon McDonald, the Foreign Office permanent secretary, declined to give evidence on the matter in a public setting due to its "sensitive" nature after Conservative lawmaker Tom Tugendhat, the foreign affairs select committee chair, asked McDonald whether staff should be withdrawn, security increased or British policy was to be “dictated by the mob.”

“There have been many advocates for Asia in the UK,” continued Chowdhry, who has since created a petition calling on Western governments to take action, pointing out that a number of Muslim leaders have since been pushing to help Bibi, too. Several British imams last week joined the request from former foreign secretary Boris Johnson, who has been championing the woman's case. 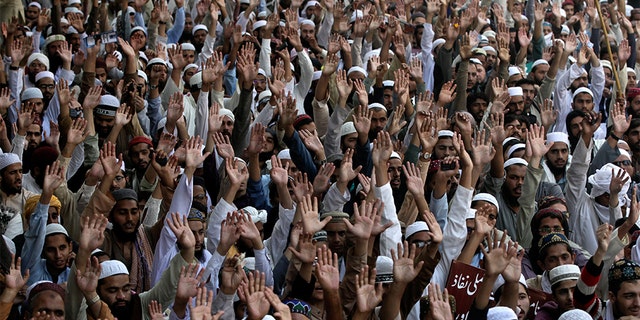 Supporters of Muttahida Majlis-e-Amal (MMA), a coalition of religious-political parties, raise their hands and chant slogans after the Supreme Court overturned the conviction of a Christian woman sentenced to death for blasphemy against Islam, during a protest rally in Lahore, Pakistan November 15, 2018. REUTERS/Mohsin Raza
In his letter of resignation to British Prime Minister Theresa May last week, the Conservative Party's now-former vice chairman Rehman Chishti emphasized that one of his reasons for stepping down was the "manner in which the Government has dealt with the case regarding Asia Bibi."

"This is a case that I have worked on passionately since 2012 ... to ensure that justice is done which was handed down by the Pakistan Supreme Court only recently," he wrote. "What I found shocking, is that the British Government is failing to put into practice the core values that our country stands for; religious freedom, justice, morally doing the right thing, and that when we see injustice where an individual’s life is in clear danger and they have been persecuted for their faith, we do all we can to help them."

In Chishti’s view, “the government should not wait to see if another country offers sanctuary, we should have had the conviction to lead on this matter and offer sanctuary ourselves straight away.”

The UK’s Foreign and Commonwealth office did not respond to a request for comment.

Amid the turmoil, the Pakistani government has moved Bibi and her family from the jail they had been using as a safe house to an undisclosed secure location.

Chowdhry said what is most disturbing about the ongoing situation is videos that have emerged showing children play-acting at hanging Bibi.

Asia Bibi, an impoverished minority Christian, was sentenced to death in 2010 after Muslim neighbors accused her of drinking from a contaminated a water jug, an offense viewed as blasphemy.

“The charges against Bibi were always based on mob mania against blasphemy. There was never anything to the charges as the Supreme Court noted,” contended David Curry, president and CEO of Christian persecution watchdog, Open Doors USA. “The protests are not surprising, but it is disappointing the Pakistani government hasn’t moved swiftly to get her to safety. It is not clear to me why any free society wouldn’t see fit to accept her. She has been the victim of a terrible injustice.” 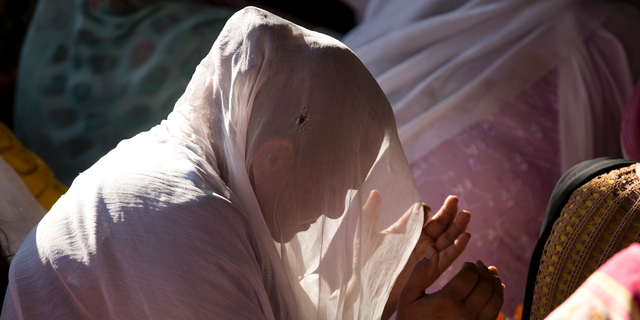 FILE - In this March 30, 2018, file photo, a Pakistani Christian woman prays during a Good Friday service at a church in Islamabad, Pakistan. The uproar surrounding Aasia Bibi _ a Pakistani Christian woman who was acquitted of blasphemy charges and released from death row but remains in isolation for her protection _ has drawn attention to the plight of the country's Christians.The minority, among Pakistan's poorest, has faced an increasingly intolerant atmosphere in this Muslim-majority nation where radical religious and sectarian groups have become more prominent in recent years. (AP Photo/B.K. Bangash, File)
Asia’s blasphemy case has remained one of the most rousing religious issues in Pakistan for nearly a decade and has led to at least two high profile political assassinations. Salman Taseer, then governor of Punjab, was assassinated by his elite bodyguard who was influenced by religious fanatics.

“A similar assassination could be possible if Asia remains in Pakistan too long,” Stark warned.

Among Pakistan’s leadership, the matter also remains contentious. One Pakistan official conveyed some frustration at the situation as an example of the government purporting to do the right thing but being drawn into the fanatic rule.

In a call with Antonio Tajani, the President of the European Parliament on the matter last week, newly-installed Pakistani Prime Minister Imran Khan reportedly doubled-down on the government’s resolve to respect the judgment of the Supreme Court and insisted that Bibi and her family are entitled to all rights. He is also reported to have expressed “serious concern” about the issue of blasphemy abroad and accentuated the need for European countries to “avoid such provocative incidents.”

Adnan Khan, Chairman of the U.S-based Council of Pakistan insisted that – contrary to reports – the Pakistan government has indeed “come down very hard on all protesters and the Islamist parties” and resolved that no new charges would be brought against Bibi.

According to the 2018 Open Doors World Watch List, Pakistan was the fifth most difficult country to live in as a Christian, trailing only Sudan, Somalia, Afghanistan and North Korea.

Pakistan's Foreign Ministry did not respond to a request for comment. However, in a statement earlier this month, the ministry denied reports that Bibi was banned from departing Pakistan and insisted she “is free to leave the country.”

Even if Bibi could sneak out unscathed, to date she has nowhere to officially go. However, several sources tell Fox News that multiple countries, including the U.S., are working to ensure her safe exit from Pakistan.

“We have been liaising with diplomats from a number of countries. In regards to the U.S., as we understand it America is working with many countries to ensure Asia Bibi’s safety and the family’s ultimate asylum in the West,” Chowdhry added. “But in the meantime, Asia Bibi is under the auspices of a Pakistani security detail – we hope that an international security detail can assume these responsibilities.”

A State Department spokesperson could not comment on the matter but referred to a press conference in which officials reiterated their position that “religious freedom is universal,” and that the Bibi case has been closely followed.

Only the worse may be yet to come.

“It is highly likely that we will see additional protests when it is announced that Asia has been allowed to leave Pakistan and seek asylum,” Stark added. “But the important thing now is to keep the pressure on Pakistan to allow Asia and her family to seek asylum outside of the country. The Pakistani government will be under significant pressure from domestic extremists to reverse Asia’s acquittal and execute her."