The Korean conflict has divided more than the two Koreas. It has also prompted the creation of opposing “blame narratives” among scholars, policymakers, and journalists. 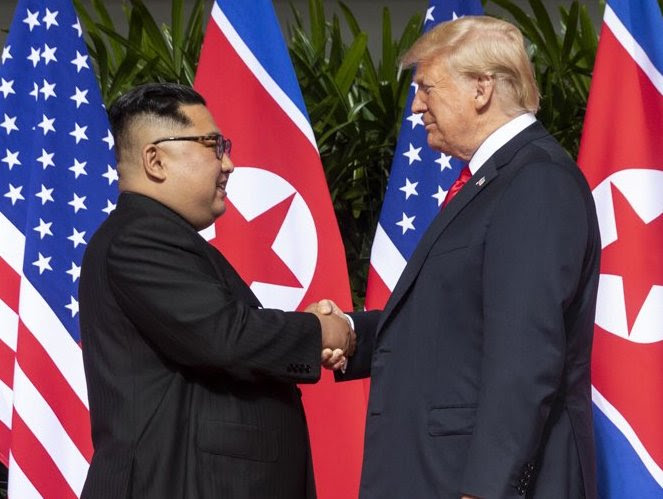 EXECUTIVE SUMMARY: The Korean conflict has divided more than the two Koreas. It has also prompted the creation of opposing “blame narratives” among scholars, policymakers, and journalists. The election of Donald Trump, and the 2018 Singapore summit between Trump and North Korea’s Kim Jong-un, challenged those narratives and forced some of the actors to reconsider their political agendas.

For many years, discussion of the Korean Peninsula conflict was divided between two main narratives that were influenced by the Cold War, as well as by the divisions between liberals and conservatives and between Democrats and Republicans. The positions were clear, depending on the writers’ political and ideological points of view. North Korea was generally portrayed in the West as evil, while South Korea and the US were presented as moderate-rational states seeking solutions for the Peninsula – solutions the DPRK was not willing to accept.

Researchers, policymakers, and journalists who wrote favorably about the DPRK or who questioned the premise that North Korea should always be blamed were perceived as pro-Communist, anti-American, or pro-Pyongyang. The dominant narrative in most of the academy coincided with the South Korean-US narrative, not the North Korean.

The 1994 US-North Korea Agreed Framework is a case in point. The agreement was seen by many as an attempt by Washington to prevent a new conflict on the Korean Peninsula. The failure of the Agreed Framework to prevent Pyongyang’s nuclearization opened up a debate about which administration was to blame for the failure. On the one hand, conservative scholars and Republican policymakers insisted that North Korea had cheated after signing the Agreed Framework and blamed the Clinton administration for advancing a naïve policy towards Pyongyang on the nuclear issue. Liberal scholars and Democratic policymakers, on the other hand, said blame should fall on the George W. Bush administration, which decided not to implement the Agreed Framework and in so doing, allegedly jeopardized the attempt to prevent the nuclearization of the North Korea. The two blame narratives followed the Republican-Democrat division.

The election of Donald Trump revived the North Korean debate, but the narratives and political divisions grew more vague. The militant rhetoric of Kim Jong-un and Trump alarmed Trump’s many critics. Doubts were raised about his North Korea policy and fears expressed that he would lead the Peninsula to a new war. In those reports, Kim Jong-un was depicted as a rational, defensive, realistic leader facing a threat from the US.

The “narrative crisis” came after the 2018 Singapore summit between Kim Jong-un and Trump. President Trump – who had been perceived by many as the one who might drag the region to a new war – met with the leader of North Korea, something no acting US president before him had done. In the past, there had been attempts to organize meetings between North Korean leaders and US presidents, but those meetings never took place because Washington perceived them as a reward for Pyongyang that it had not yet earned.

The agreement that Kim Jong-un and Trump signed at the Singapore summit has huge loopholes and is a challenge for both Democrats and Republicans to come to terms with. Had President Obama or President Clinton signed the same agreement with Kim Jong-un, the Republican party, John Bolton, and other conservative policy makers would have criticized it – not only for giving Pyongyang more carrots than sticks, but for legitimizing Kim without getting a concrete deal in advance. But the agreement challenged liberal Democrats as well. President Trump, a Republican, is pursuing a policy that they might believe should have been implemented by previous Democratic presidents. Should they therefore support his policy? Or should they oppose it solely on the grounds that it came from Trump, a Republican?

These debates on North Korean-US relations reveal a political identity crisis among American citizens, policymakers, and analysts. Should they support – possibly in opposition to their own political agendas – the Republican president’s policy towards North Korea, a policy that hawks believe threatens the security of the US and its allies? Or should they oppose the conservative think tanks criticizing Trump’s Pyongyang policy on the grounds that it represents the interests of the military-industrial complex? How can they oppose such a position when they have taken it themselves in the past? Should they side with North Korea for the sake of politically opposing Trump and ignore its vast human rights violations? Or should they support Trump’s North Korea policy, despite their loathing of the president, in the hope that his unconventional approach will lead to positive change in the Korean Peninsula – a change both Republican and Democratic presidents have failed to achieve?

President Trump unwittingly sparked a change in the debate on US-North Korea relations and muddied the blame narrative, laying bare a striking shift in political divisions among the players.


Dr. Alon Levkowitz, a research associate at the Begin-Sadat Center for Strategic Studies, is an expert on East Asian security, the Korean Peninsula, and Asian international organizations.