​
by Eric Schmitt and Ben Hubbard


The attack, which was claimed by the Islamic State, occurred at a restaurant in Manbij, northern Syria, frequented by American troops. Warning: video includes scenes of graphic violence.Published OnJan. 16, 2019CreditCreditANHA, via Associated Press


WASHINGTON — American troops were among 15 people killed on Wednesday in a suicide bombing in northern Syria that was claimed by the Islamic State, just weeks after President Trump ordered the withdrawal of United States forces and declared that the extremist group had been defeated.
The attack targeted a restaurant in the northern city of Manbij where American soldiers would sometimes stop to eat during their patrols of the area, residents said. After the blast, a number of Americans were evacuated by helicopter, they said. It was not immediately clear how many had been in the area at the time of the blast.
A statement by the Baghdad-based American headquarters for the fight against the Islamic State said the attack happened while the troops were on a patrol.
“U.S. service members were killed during an explosion while conducting a routine patrol in Syria today,” said the statement, which was posted on Twitter. “We are still gathering information and will share additional details at a later time.”

The Syrian Observatory for Human Rights put the death toll at 15 and said one American soldier was among the dead.
Additionally, a Defense Department official said there were multiple Americans killed or wounded but did not give specific numbers. Another United States official said as many as three American troops and an American civilian were killed, and three others wounded — one critically. Both of those officials spoke on condition of anonymity.

Sarah Huckabee Sanders, the White House spokeswoman, said Mr. Trump had been briefed on the attack “and we will continue to monitor the ongoing situation in Syria.” Vice President Mike Pence, speaking at a gathering of American ambassadors at the State Department headquarters on Wednesday, maintained that plans to pull troops out of Syria remain on track.

Mr. Pence also said, however, that the United States would “stay in the fight to ensure that ISIS does not rear its ugly head again.”

The bombing puts Mr. Trump in the position of being squeezed between his decision to withdraw American troops and his promise in a tweet on Sunday to hit the Islamic State again, and “hard,” if the group lashed out.

The United States has about 2,000 soldiers in Syria who were sent to work with local militias in 2015 to fight the Islamic State. Wednesday’s attack prompted calls from Republicans and Democrats in Congress for Mr. Trump to reconsider his decision to withdraw troops from Syria.

Manbij, a city in northern Syria, has been ruled by nearly all sides that are fighting in the country’s civil war that broke out in 2011. An American-backed militia of Kurdish and Arab fighters ousted the Islamic State from the city in mid-2016.

Since then, Manbij largely has been governed and protected by American-backed local councils. While the city is hundreds of miles from any territory held by the Islamic State, it sits next to territory controlled by Turkey and its Syria rebel allies. American forces maintain a number of bases near Manbij and run frequent patrols.

A statement from the Islamic State, released through its Amaq news agency, said that the suicide attacker blew up his explosive vest to target a patrol of coalition soldiers and local militiamen near the Qasr al-Umara restaurant in Manbij. It claimed killing and wounding nine Americans and a number of local residents. A helicopter carried the dead and wounded away, the group said. 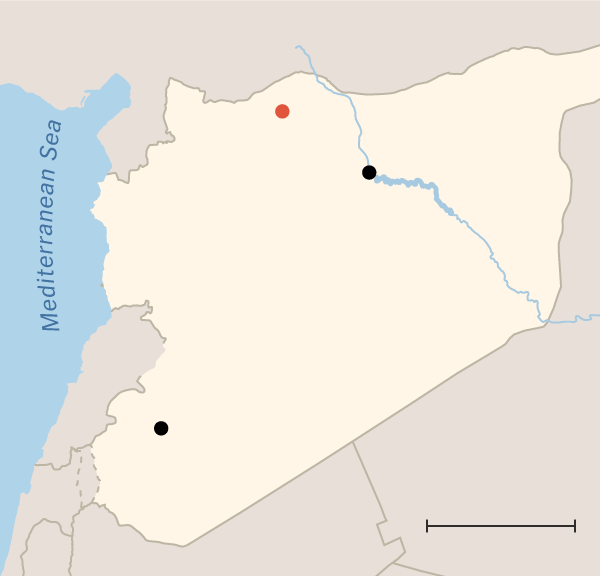 In December, Mr. Trump announced that he wanted to withdraw the American forces in as little as 30 days. That decision, over the advice and then objections of his top national security aides, was followed a day later by the resignation of Defense Secretary Jim Mattis.

Mr. Mattis signed the formal order to begin the military withdrawal before he left the Pentagon at the year’s end. But last week, John R. Bolton, the White House national security adviser, outlined conditions for the withdrawal that could leave American forces in Syria for months or even years.

So far, the military has begun withdrawing some equipment, but not yet troops, from Syria. The overall plan for the withdrawal has yet to be described in detail.

American military officials have offered a cautionary note that there was also a surge in violent attacks in Iraq in 2011 as United States troops were withdrawing from that conflict. Wednesday’s attack in Syria, the officials said, could be viewed as a signal from the Islamic State that, contrary to Mr. Trump’s assertions that the caliphate has been destroyed, it remains a threat.

“The battle against ISIS is far from over,” said Charles Lister, a counterterrorism specialist at the Middle East Institute. “Not only are the U.S. and their local partners still engaged in open warfare against ISIS in eastern Syria, but there have also been clear signs for many months that ISIS maintains the ability to conduct a low-level guerrilla-style insurgency in Syria, as typified by today’s attack.”

Some members of Mr. Trump’s administration have said publicly that United States forces should remain in Syria as leverage in negotiations with President Bashar al-Assad for an end to Syria’s war, to keep Iran from expanding its influence, to protect the United States’ Kurdish allies and to prevent a jihadist resurgence.

Before Wednesday’s attack, two American troops had been killed in Syria since the first contingent of Special Operation troops entered the country in 2015.