While Russia will not be able to satisfy everyone, it does understand that it will need to leave each side with “half of its desires” 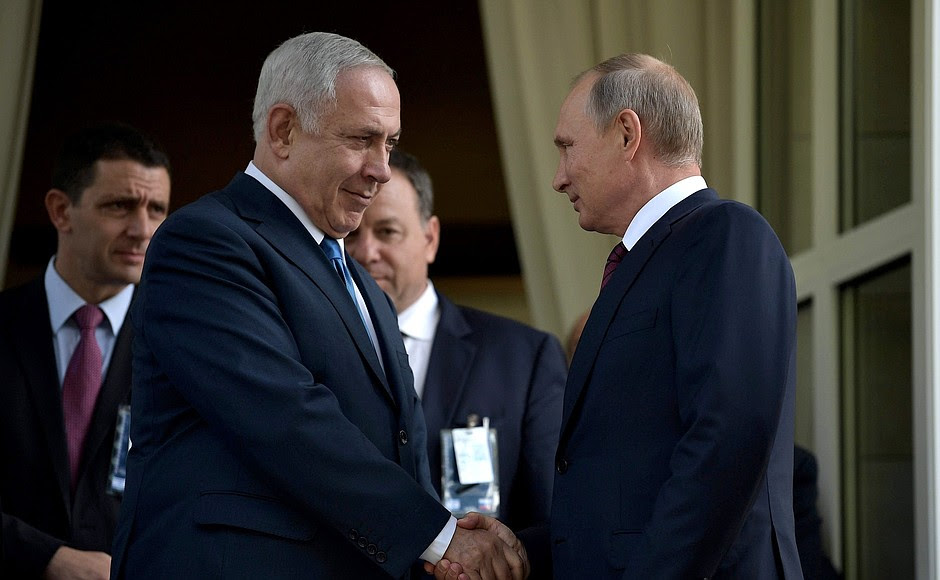 Vladimir Putin and Benjamin Netanyahu, photo via Office of the President of Russia

EXECUTIVE SUMMARY: Russia holds the cards in Syria. Jerusalem and Tehran must spell out their desires for the Syrian arena to Moscow, who in turn must find a way to leave each side with “half its desires.”

Israeli PM Benjamin Netanyahu and Russian President Vladimir Putin have been engaged in a flurry of discussions recently, at least some of which are likely tied to Iranian activities in Syria.

The meetings come in the shadow of recent reports of a major Israeli airstrike on March 28 that targeted an Iranian weapons warehouse near the northern Syrian city of Aleppo. The strike reportedly resulted in large blasts and casualties.

Russia leads a pro-Assad military coalition in Syria, of which Iranian forces are a central part. It also maintains a deconfliction channel with Israel to avoid unintended clashes between its air force and the Israeli Air Force, both of which are active in the Syrian arena.

Putin has also attempted to play the role of mediator between Israel and Iran, seeking to douse the shadow war raging between them on Syrian soil. Israel, for its part, is determined to disrupt Iran’s plan to turn Syria into a war front against it.

Netanyahu flew to Moscow last Thursday for a meeting with Putin, just five days before Israel’s April 9 elections. On April 1, Netanyahu and Putin held a phone conversation to talk about “military cooperation issues,” according to the Kremlin, as well as “pressing bilateral issues” and “the situation in the Middle East region.”

On February 27, the two leaders met in Moscow to discuss Syria. Netanyahu said the two sides reached an agreement on how to coordinate between their militaries. They also apparently agreed on a goal of getting “foreign troops” to leave Syria, according to Netanyahu.

While Russia will not be able to satisfy everyone, it does understand that it will need to leave each side with “half of its desires,” Professor Uzi Rabi, director of the Moshe Dayan Center for Middle Eastern and African Studies at Tel Aviv University, said.

To achieve this, Moscow will get every actor to spell out “what is really important to it, and here, Israel has an opportunity to define the range and perimeter of Iran’s actions in Syria,” he added. “In general, this is a new situation that the region is not used to. The Russians are managing this game with many bargaining chips, and Israel will have to adapt itself to the new rules of the game.”

Doron Itzchakov, a research associate at the Begin-Sadat Center for Strategic Studies, agreed that the current situation is good for Moscow.

“The Russian interest is to position itself as the ‘final judge’ in Syria, and this situation, in which Netanyahu runs to Putin and the Iranian side runs to him, is comfortable for them. They are comfortable with being the ones balancing the scales,” he said.

Iran, for its part, will be closely monitoring Israel’s contacts with Russia and will adapt its policies in Syria accordingly. “The Iranians will be watching out for Russia’s policy in Syria, to see how they need to change their tactics. Iran has no plan to release its grip on Syria, but it will change tactics so as not to lose momentum,” Itzchakov said.

One recent example of how Iran has adapted its takeover efforts in Syria is the way it has embedded its military personnel and weaponry in sites run by the official Syrian Arab Army. This has not stopped Israel from reportedly striking such targets when it detects them.

Itzchakov stressed that Iran’s decisions in Syria cannot be disconnected from Tehran’s wider geopolitical ambitions or from internal power struggles that are raging inside the Islamic Republic.

He cited a visit in March by Iranian President Hassan Rouhani to neighboring Iraq as an example of this linkage. The goal of that visit was to develop an economic corridor to bypass American sanctions, said Itzchakov.

The visit also boosted the prestige of Rouhani, who is facing major criticism at home from the rival conservative bloc and the Iranian Revolutionary Guards Corps (IRGC).

In addition, Iran has been able to build up armed forces in all of these countries — Iraq, Syria, and Lebanon — and has turned them into deeply influential political forces in Iraq and Lebanon. Iran plans to do the same in Syria.

But the element responsible for this activity is mainly the IRGC and General Qassem Soleimani, commander of the overseas Iranian Quds Force unit, who is competing with Iran’s FM, Muhammad Zarif, for control of Iran’s regional policies, said Itzchakov.

“Out of this internal rivalry emerges the story of Iranian activities in Syria,” he added. “The IRGC’s power as a decision-maker in geopolitical, economic, and diplomatic areas is rising.”

The internal power struggle is making “Iran more sensitive to Syria,” said Itzchakov. “Even when done in opposition to the popular wishes of the Iranian people, the IRGC makes its own decisions, including in Syria. The IRGC wants to set the agenda.”

This is an edited version of an article that was published on JNS.org on April 4, 2019.