The Purge of John Bolton - Dr. Jiri and Leni Valenta

​
by Dr. Jiri and Leni Valenta


[John Bolton] maintains, correctly, that Americans support leaders who are not appeasers but defenders of American values, vital national interests, and human rights. 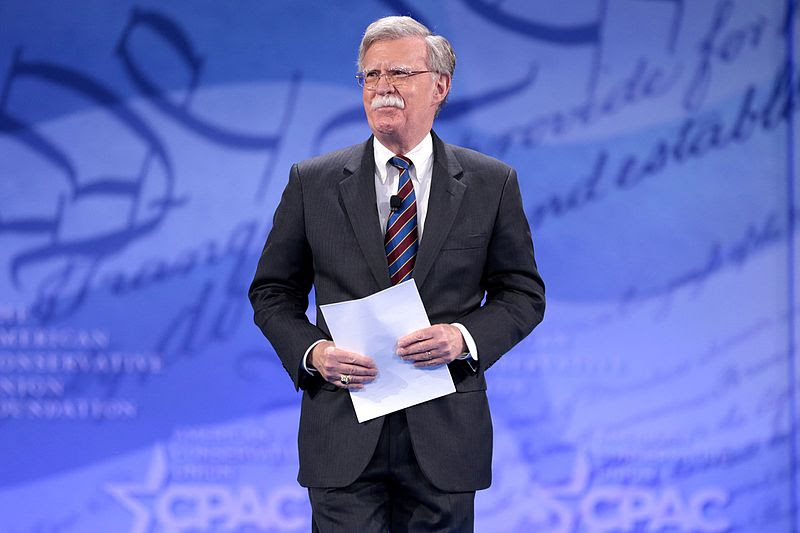 EXECUTIVE SUMMARY: In Syria, President Trump, like Obama before him, seems oblivious to the reality that when the US withdraws, its enemies advance and fill the vacuum. Ousted NSA John Bolton has said that America is constraining its range of action through foolhardy entanglements with international institutions and naive bilateral agreements that promise too much to America’s enemies in exchange for too little. He maintains, correctly, that Americans support leaders who are not appeasers but defenders of American values, vital national interests, and human rights.

Something unprecedented happened last month. A National Security Advisor, Ambassador John R. Bolton, was forced out by a cabal of TV commentators and foes of Bolton and President Donald Trump. Perhaps for the first time, the departing NSA then publicly repudiated the president for his foreign policies. Prominent American attorney Alan Dershowitz described Bolton’s purge as a ”national catastrophe.”

Bolton’s purge has serious national security implications for the future of the US. Kudos to him for sacrificing his job if he felt the president was marching in the wrong direction. Bolton’s pain may well have been caused by his no longer being able to endure Trump’s “Obama moments.”

“Obama moments” involved “leading from behind” in what was essentially an absence of strategy. His policies “produced only failed states, Islamist-fed chaos, growing terrorist attacks in Europe, and catastrophic debt.” To that list, add a lack of resolve and a tendency to make imperfect compromises and concessions to foreign foes. Obama’s aides coined the phrase “strategic patience” to describe this doctrine.

By contrast, at the start of 2017, under the guidance of Defense Secretary James Mattis and NSA H.R. McMaster, President Trump started his term with several “bangs.”

First, he punished Syrian dictator Bashar Assad with a successful attack on a Syrian airfield for his presumed use of chemical warfare on his own civilians. This assault by Trump had tremendous significance. Perhaps the most memorable “Obama moment” was Obama’s 2013 back-pedaling from his own red line against chemical warfare. He called back destroyers headed for Syria’s shores and instead made a deal with Vladimir Putin to remove all chemical weapons from Syria.

After the aerial assault, Trump dropped a MOAB (Massive Ordinance Air Blast, or “Mother of All Bombs”) on the Taliban in Afghanistan. This decisive move was followed by the dramatic use near North Korea’s coast of a large armada of naval ships, coupled with moves against the North Korean dictator by the US Army and Air Force as well as Trump’s own rhetorical pressure.

A new captain was steering the ship of state, and his team did not put off problems in the manner of previous US administrations. The new team met problems head-on, sending a clear message on the need to stop a maniacal North Korean leader from further developing his nuclear weapons and delivery systems which, as in Guam, were already capable of reaching American shores.

Signaling the end of “strategic patience,” these moves seemed to debut an emerging Trump doctrine that could be dubbed “strategic savvy” – clever diplomacy, resolve, courage, and the judicious use of economic instruments as well as military force. Bolton, then a TV commentator and Chairman of the Gatestone Institute, a role he has since resumed, was possibly impressed by the president’s “pro-American”-ness, as indicated in an interview published in March 2019:

I would describe myself as pro-American. The greatest hope for freedom for mankind in history is the United States, and therefore protecting American national interests is the single best strategy for the world.

Bolton added that America has slowly constrained its range of action through foolhardy entanglements with international institutions such as the UN and naive bilateral agreements that promised too much to America’s enemies in exchange for too little.

The reason for Bolton’s September 2019 falling-out with the president seems to have been his growing objection to Trump’s gradual return to the unworkable Obama policies of strategic patience and retreat.

In some areas of foreign policy, such as strong support for America’s ally Israel, Trump and Bolton agreed, as they did on arming Ukraine with Javelin missiles and keeping Iran at bay.

In Syria, however, Trump, like Obama before him, seems to have failed to grasp that when the US withdraws, its enemies advance and fill the vacuum. Secretary of Defense Mattis resigned apparently in objection to this retreat. Bolton would do the same months later, evidently over the president’s invitation to the Taliban to come to Camp David while excluding the US-allied Afghan government –on the week of the commemoration of the 9/11 attacks on the US. Like Mattis, Bolton sacrificed his job because of foreseeable negative consequences to US national interests.

America’s Kurdish allies have now been left by Trump to be slaughtered by Turkey. The US troop withdrawal also has a detrimental impact on Ukraine, as it, along with other countries, is negatively reassessing US reliability.

At the time of the withdrawal, Russian President Vladimir Putin launched what appeared to have been a feint in the direction of the Ukrainian port city of Mariupol, as he did once before in 2015. His real objective seems to have been a new and bloody joint attack together with Syrian dictator Bashar Assad and the Islamic Revolutionary Guard Corps against rebels in the Syrian province of Idlib. The Russo-Syrian offensive appears to have intensified after it became clear that Trump’s response to the new carnage was not going to exceed an angry tweet.

North Korea: Back to strategic patience

After demonstrating strategic savvy with Kim Jong-un in 2017-18, Trump reverted to strategic patience. After the show of strength came the summits.

Trump seems to have believed he could talk Kim into cooperation as though he were a real estate client. Thus, he praised the bloody, merciless, Stalin-like Kim as having “a great personality,” rejoiced at the “good chemistry” between them, and uttered other unpresidential comments that were likely embarrassing to Bolton.

As Bolton warned, “Under current circumstances, he [Kim] will never give up the nuclear weapons voluntarily.”

North Korean officials have made it a longstanding practice to wine, dine, entertain, and hoodwink American negotiators as they build their nuclear arsenal. Under President George W. Bush, for example, Secretary of State Condoleezza Rice was so eager to have an agreement with the present dictator’s father that she engaged in what then-VP Dick Cheney called “concession after concession.” In a particularly desperate move, Rice even took North Korea off the list of state sponsors of terrorism.

Trump is following a similar playbook. Over Bolton’s objections, he agreed to Pyongyang’s major demand – the cancellation of US-South Korean military exercises, with no North Korean reciprocity.

A major turning point came when the Iranians attacked allied shipping in the Persian Gulf and shot down a US drone. Trump’s decision not to respond militarily – and his pulling back of US planes that were ready to bomb targets in Iran – reminds one of the fecklessness of Obama. His failure to retaliate against either the attacks on allied shipping or the Iranian strike on a Saudi oil-producing enterprise can only encourage future Iranian military actions against allied assets in the Persian Gulf.

Trump seems to be signaling that he thinks all differences can be resolved through negotiations. However, all US presidents since Nixon would likely have punished Iran for using military force – with perhaps the lone exception of Obama.

Trump would like to negotiate a new nuclear deal with Iran’s leaders, but – like the North Koreans – they will not stop their bomb-making. Period. So keep the sanctions, let the regime crumble, and use force if and when necessary. One of Trump’s greatest achievements was when he scrapped the disastrous, unsigned “Nuclear Deal” with Iran (the JCPOA), which actually paved the way for Iran to have as many legitimate nuclear weapons as it liked.

A troika of tyranny: Cuba, Venezuela, and Nicaragua

Bolton has dubbed Cuba, Venezuela, and Nicaragua a “troika of tyranny” in the US’s strategic backyard. Venezuela, once a wealthy OPEC country flush with oil, has devolved in 20 or so years into a failed state whose people live under unbearable conditions of starvation and want – a sinkhole of drugs, crime, and Hezbollah terrorists.

Vladimir Putin, with the help of Cuba, has flouted America’s Monroe Doctrine by giving military aid to Venezuela’s “socialist” regime and propping up the regime of its illegitimate president, Nicolás Maduro. But not even the arrival of Russian and Chinese “advisers” and the delivery of military aid to the country appears to have moved Trump. Significant action to oust Maduro has yet to occur. Tweets and empty threats have not worked, unsurprisingly.

The crescendo of the Russian-Syrian offensive in the summer of 2019 can now be seen in the tens of thousands of Syrian civilians fleeing their country and trying to reach Europe through Turkey. The new Syrian exodus is providing Turkish president Recep Tayyip Erdoğan with an excuse to issue repeated threats that he will flood Europe with 3.6 million refugees from Turkish camps.

Trump is going to have to deal with the challenge Erdoğan is presenting to the US. Erdoğan is no longer America’s strategic ally, as he made clear when he chose to purchase Russian weaponry incompatible with the requirements of NATO, to which he is theoretically committed.

President Trump would do well to follow the recommendations of military and foreign policy experts who know history, strategy, and geopolitics. He is displaying an unfortunate course correction with policies reminiscent of the worst decisions of the Clinton, Bush, and Obama administrations.

Above all, Trump would be well advised to work toward reconciliation and the building of a productive relationship with the emerging Bolton wing of the GOP.

Late in Ronald Reagan’s 1983-84 election campaign, when he was besieged by Democrats calling him a warmonger, he refused to project the image of a president seeking peace at any price. He invaded the island of Grenada, which had just deposed a brutal Leninist regime in a bloody coup.

The American people do not necessarily elect candidates exclusively engaged in the search for peace. Bolton is correct: Americans support leaders who are not appeasers but defenders of American values, vital national interests, and human rights – particularly in the country’s own backyard. It is not too late for President Trump. He needs to wake up.

This is an edited version of an article published by the Gatestone Institute on October 15, 2019.

Dr. Jiri Valenta is a member of the U.S. Council on Foreign Relations and an expert on strategic studies, specializing in Russian and U.S. military interventions, terrorism, and Israel’s relations with central European countries. He is also a non-resident Senior Research Associate with the BESA Center for Strategic Studies.

Leni Friedman Valenta, a playwriting graduate of the Yale School of Drama, is senior editor of the Valentas’ website, jvlv.net.  She has written articles for The Middle East Quarterly, The National Interest, The Aspen East Central Review, Miami Herald, Kyiv Post, and others.