Taiwan’s independence-leaning lawmakers have pushed through a controversial bill in the final legislative session of the year that critics say could have a chilling effect on the self-ruled island and worsen ties with Beijing.


The anti-infiltration bill, which criminalises political activities backed or funded by “hostile external forces” – referring to mainland China – was passed by the Democratic Progressive Party-controlled legislature after it was put to a vote on Tuesday.
“The voting result shows 67 of those present in favour of passing the bill against zero opposing it,” legislative speaker Su Jia-chyuan said in an announcement afterwards.
Opposition politicians, including those from the mainland-friendly Kuomintang (KMT), had strongly criticised the bill, saying it was a move by President Tsai Ing-wen and her government to silence dissent ahead of elections on January 11

The ruling DPP said the legislation aimed to combat efforts by Beijing to influence politics and the democratic process on the island, including through illicit funding of politicians, and the media.

Beijing’s Taiwan Affairs Office, which oversees policies related to the island, said the DPP was seeking electoral gain from the move and creating enmity across the strait.

“We sternly warn the DPP, blood is thicker than water for the compatriots from both sides of the strait, who protect and help each other: this is something no force can change,” the office said in a statement after the legislation was passed.
Beijing sees Taiwan as its territory, to be brought back to the mainland’s fold – by force if necessary.
The main opposition KMT party said the law could become a “political tool” for the government.
Wearing black face masks and chanting “violation of human rights and freedom of speech”, a dozen KMT lawmakers walked out when the final vote was called in protest against what they described as “witch-hunt legislation”. They then staged a sit-in in the legislative chamber. 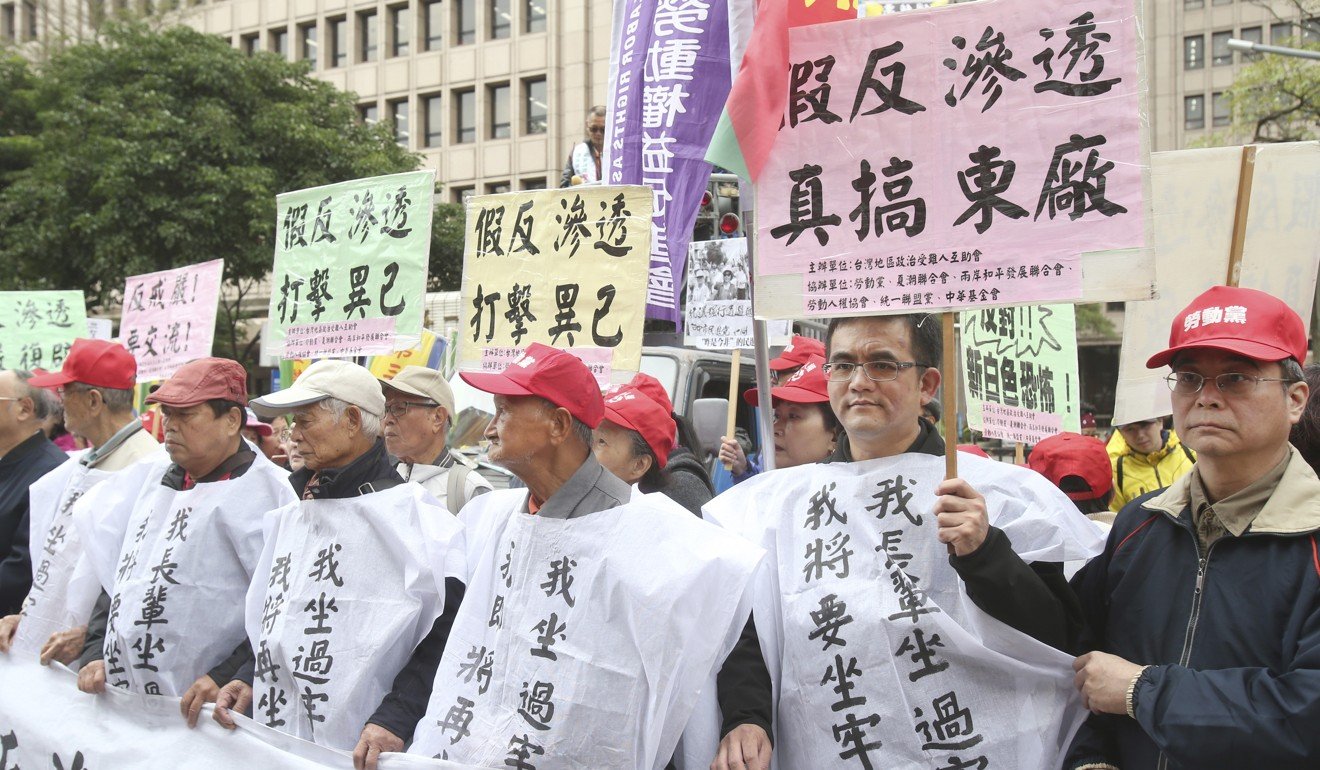 Protesters hold slogans against the anti-infiltration bill outside the legislature in Taipei on Tuesday. Photo: AP

The four mainland-friendly People First Party lawmakers also voiced their objections to the bill, saying it was full of flaws and procedural problems. They also walked out of the vote.
“Without a clear definition of certain terms like ‘instruction’ and the ‘source of infiltration’, the bill will become a special law for the DPP to purge the opposition, and for this we decided to stage a sit-in to protest against the DPP’s scheme to ram through the bill,” said KMT caucus whip Tseng Ming-chung.
The bill was initiated by the DPP in late November and Tsai pushed for it to be passed by the end of the year. It is expected to come into force next month.
Under the new legislation, anyone who receives funding, instructions or donations from “external forces” to mobilise public rallies, for election campaign activities, to lobby government officials or lawmakers, or disrupt the social order could be jailed for up to five years and fined up to NT$10 million (US$332,000).

The KMT later issued a statement condemning the DPP for “ramming through” the bill, saying the legislation would be a backwards step for Taiwan’s hard-won democracy.
“This is a draconian law which not only violates the constitution … but also inhibits human rights,” the KMT said, adding that it would have an impact on freedom of speech and movement.
The People First Party (PFP) said it would seek to have the act nullified through the constitutional court.
Lee Hung-chun, the PFP caucus whip, said the law would exacerbate tensions between the pro-independence DPP and the island’s Beijing-friendly camp.
“It will also create disputes when one person accuses another of receiving support from the mainland just because they have different ideologies,” Lee said.


Analysts said the legislation could have a chilling effect on Taiwan.

“Many Taiwanese people – including academics, politicians and businesspeople – receive gifts or are entertained by mainland authorities during their visits,” said Wang Kung-yi, a political science professor at Chinese Culture University in Taipei. “This may create a chilling effect and it will only further hamper cross-strait exchanges.”

Chu Chao-hsiang, a political science professor at National Taiwan Normal University, said a chilling effect caused by the legislation would potentially mean lost opportunities for the island as businesses turned away from the mainland.

“Many overseas subsidiaries of mainland companies have investments in Taiwan. If they send funds to their Taiwanese executives in Taiwan to carry out certain investment projects, would this be seen as receiving funds and instructions from the mainland?” he said.

Lee Cheng-hung, head of the Association of Taiwan Investment Enterprises on the Mainland, feared the legislation could “create a serious problem for cross-strait marriages, business, student and academic exchanges as well as cooperation between Taiwan and mainland enterprises”.

“It will not punish people who have no idea that what they’re doing constitutes a violation of the law,” the council said in a statement, adding that judicial authorities would carefully deal with such cases.

Sign up now
for our 50% early bird offer from SCMP Research: China AI Report. The all new SCMP China AI Report gives you exclusive first-hand insights and analysis into the latest industry developments, and actionable and objective intelligence about China AI that you should be equipped with.
This article appeared in the South China Morning Post print edition as: Taiwan’s anti-infiltration bill passed amid protests