Israeli Prime Minister Benjamin Netanyahu sat down with Mark Levin for an interview airing on "Life, Liberty & Levin" Sunday, days before Israelis go to the polls for the country's third general election in fewer than 11 months.

"I'm familiar with this," said Levin. "Two staffers who refer to our president in one way or another as Hitler, and Mr. Gantz keeps them on board as senior advisers."

Netanyahu claimed Gantz has merely "pretended" to be part of a more moderate political movement and added that he has asked Gantz to dismiss the two men, one of whom he identified as Joel Benenson, an American who has also advised the campaigns of Hillary Clinton, President Barack Obama and the late former New York Gov. Mario Cuomo. Netanyahu identified the other adviser as Ronen Tzur, a former member of the Knesset.

According to the Jerusalem Post, Tzur posted disparaging comments about Trump on Twitter in 2016. In March of that year, he wrote: "The book of the 21st century: Mein Trumpf”, a play on Hitler's polemic "Mein Kampf."

The Jerusalem Post also reported that Tzur apologized when his tweet came to light earlier this year, calling Trump "the bravest president of the [United States]" and praising his commitment to Israeli's security.

In an October 2018 tweet, Benenson replied to another Twitter user's claim that Trump kept a copy of Hitler's speeches by his bed by claiming that the president's language is influenced by the German tyrant. 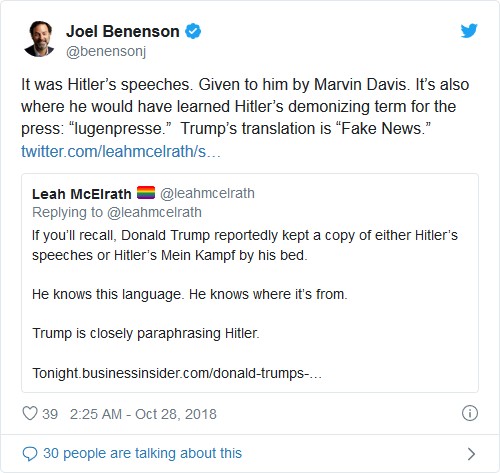 Netanyahu told Levin that the Gantz team is "putting on an act" in order to falsely persuade Israeli voters that they back the Trump administration's Middle East peace plan.

"These people who call President Trump Hitler are for President Trump's plan? Come on, give me a break. So this is one big con job. That's what it is."

For his part, Netanyahu called Trump's plan "terrific." The plan calls for a two-state solution including the state of Israel and the "future" state of Palestine. Under the plan, the Palestinians would have to reach certain benchmarks to achieve a state, including rooting out terrorism, stopping so-called “pay to slay” programs, implementing steps toward free speech, and other political reforms.
"It's a strategic buffer against invasion and smuggling of weapons from the east," he said. "It recognizes the legitimacy and the sovereignty of Israel over communities in our ancestral homeland, in Judea and Samaria."