The choice facing PM Benjamin Netanyahu is between the more or less recognized risks associated with applying sovereignty and the less knowable but undoubtedly serious risks inherent in the collapse of the status quo. 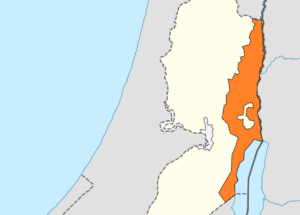 September 2019 annexation proposal by Israeli PM Netanyahu.
The area to be annexed is in orange; the beige area is the rest
of the West Bank. Image via Wikipedia

EXECUTIVE SUMMARY: Contrary to the alarming charge that the application of sovereignty over parts of the West Bank would transform Israel into a binational state, doing so would not affect 95% of the West Bankers who have been living under the rule of the Palestinian Authority since January 1996. They will continue to do so. The move does entail political risks, but they are smaller than the security hazards that would accompany Israel’s inability to maintain a permanent security presence in the Jordan Valley.

Many of the most vociferous opponents of applying sovereignty over parts of the West Bank are former senior security officials who use their professional authority to convince the public that a wide range of grave risks would attend such a move. According to these individuals, the application of sovereignty would expose Israel to multiple deeply threatening dangers and is in any case unnecessary.

The implication of this line of thinking is that Israel’s current strategic position is riskless and hence preferable to the new position that would result from the application of sovereignty. That is a misrepresentation of reality.

If the Israeli government misses the opportunity presented by President Trump’s plan to apply sovereignty, the risks to Israel multiply; they do not decrease. That is because Israel will not be able to preserve its temporary security presence in the Jordan Valley forever.

The choice facing PM Benjamin Netanyahu is between the more or less recognized risks associated with applying sovereignty and the less knowable but undoubtedly serious risks inherent in the collapse of the status quo.

The dangers to Israel of a full withdrawal appear to be obscure to a great many professional soldiers. The Allen Plan of the Obama era, the brainchild of US Gen. John Allen, advocated a complete withdrawal of IDF forces from the Jordan Valley. This is also the basic plan for a permanent status agreement as outlined on the “Commanders for Israel’s Security” website.

A full withdrawal would bring the kind of threat currently posed by Hezbollah and Hamas all the way to the outskirts of Highway 6. The Israeli public must weigh the risks inherent in the application of sovereignty against the severity of the risks of total withdrawal—not an easy task, as the latter set of risks is being minimized for public consumption by members of the military elite.

It is important to reiterate: The prime minister’s plan to apply sovereignty would have no effect on the vast majority of Palestinians living in Areas A and B, which have been under PA control since January 1996. Even if the Authority decides to cease to exist, it is not a foregone conclusion that there would be a need to return to the military administration.

The Israeli government has been given an opportunity—one that may well never return—to promote the country’s vital national interests and bolster its future. This is an opportunity not only to expand territorial control but also to reposition Israel as a nation that will dare to act on its own behalf even in the face of threats. That is the embodiment of sovereignty: political power and independence.

Maj. Gen. (res.) Gershon Hacohen is a senior research fellow at the Begin-Sadat Center for Strategic Studies. He served in the IDF for 42 years. He commanded troops in battles with Egypt and Syria. He was formerly a corps commander and commander of the IDF Military Colleges.