Italy is doing its bit to aid the jihad against Israel


UNRWA is founded upon a giant lie. Palestinian “refugee” status is as trumped-up as the “Palestinian” nationality itself, and there is no reason why U.S. taxpayer dollars should continue to prop up this jihadist fiction. World Israel News noted recently that when UNRWA was established, it offered aid only to “the original refugees who had lost their ‘home and means of livelihood’ as a result of the Arab-Israeli War of Independence in 1948.” However, “it was only several years later that the eligibility requirements changed to include the refugees’ descendants, which meant that instead of the numbers steadily dropping as the years pass, they have jumped exponentially.” This has never happened before in the history of the world. Refugee status has never before been passed on to one’s children, grandchildren and great-grandchildren.

The Trump administration’s decision to cut off U.S. funding to UNRWA was a significant blow to this corrupt and dishonest organization. as the United States had been its largest donor. U.S. taxpayers doled out $350 million to UNRWA in 2017 alone.

But Italy is doing its bit to aid the jihad against Israel:
Hamas sleeper cell and Islamic Jihad discovered working together inside UNRWA June 25, 2019
UNRWA inciting jihad violence against Israel in its Jerusalem schools January 31, 2019
UNRWA schoolbooks in Gaza stress jihad, martyrdom, denial of Israel, and return of “refugees” by force of arms October 30, 2014
UNRWA gives Hamas rockets found in Gaza school back to Hamas July 20, 2014
Why there are civilian casualties in Gaza: Islamic jihadists place rockets in Gaza UNRWA school July 17, 2014 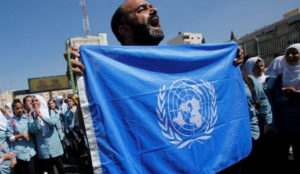 
Italy has contributed €6.8 million ($8.2 million) to the United Nations Relief and Works Agency for Palestine Refugees in the Near East (UNRWA) in support of its core programmes and services including education, healthcare and relief and social services.

The Italian government’s donation comes following the Palestinian Liberation Organisation’s appeal to the UN to protect Palestinian refugees and support the UNRWA in light of the coronavirus outbreak.
Giuseppe Fedele, Consul General of Italy in Jerusalem, said: “This contribution reflects Italy’s steadfast commitment in supporting UNRWA to deliver essential services to Palestinian refugees across all its fields of operation. UNRWA remains a vital stabilizing factor in a region that continues to be plagued by old and new crises, as the recent, catastrophic explosion in the port of Beirut has dramatically shown.”
In a region rife with conflicts, and now battling the health and socioeconomic impacts of Covid-19, UNRWA stands as a vital source of regional stability.
UNRWA’s funding comes almost entirely from voluntary donations made by UN member states. The agency has faced severe financial difficulties since the Trump administration stopped aid donations altogether in 2018….