Two American B-52 bombers flew a nonstop, 30-plus-hour, round-trip mission from the United States to the Middle East to send a fresh warning to Iran as a senior military official said new warnings had been detected, a sign that potential "complex attacks" against Americans are brewing as the one-year anniversary of the U.S. killing Iran’s most powerful general looms.

In a statement, U.S. Central Command said the bombers launched from Minot Air Force Base in North Dakota on Tuesday morning, marking the third time in the past 45 days U.S. Air Force bombers have flown deterrence missions over the Persian Gulf under fighter escort. The bombers flew through without incident, and Iran had not reacted publicly as of Wednesday morning. 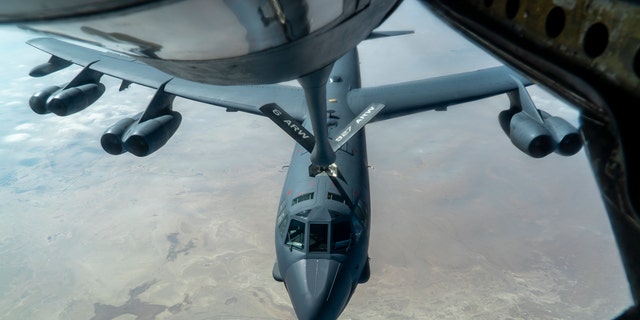 A U.S. Air Force B-52 from Barksdale Air Force Base is aerial refueled by a KC-135 Stratotanker over the U.S. Central Command area of responsibility Dec. 30, 2020. The B-52 Stratofortress is a long-range, heavy bomber that is capable of flying at high subsonic speeds at altitudes of up to 50,000 feet and can carry nuclear or precision guided conventional ordnance with global reach precision navigation capability. (U.S. Air Force photo by Senior Airman Roslyn Ward)

"The United States continues to deploy combat-ready capabilities into the U.S. Central Command area of responsibility to deter any potential adversary, and make clear that we are ready and able to respond to any aggression directed at Americans or our interests," said Gen. Frank McKenzie, commander of U.S. Central Command. "We do not seek conflict, but no one should underestimate our ability to defend our forces or to act decisively in response to any attack."

Jan. 3 marks the one-year anniversary of U.S. Special Operations forces killing Iranian Maj. Gen. Qassem Soleimani in a drone strike in Baghdad. A recent U.S. intelligence report says Iran wants to "avenge that killing," according to a senior U.S. military official who spoke to Fox News and a small group of reporters ahead of the bomber flight. The official requested anonymity to discuss the sensitive information.

WHO IS QASSEM SOLEIMANI, THE SHADOWY LEADER OF THE ISLAMIC REVOLUTIONARY GUARD CORPS' QUDS FORCE?

The fresh intelligence about Iran is the "most concerning" information to come in since the killing of Soleimani last year. In May 2019, U.S. officials detected a surge of weapons pouring into Iraq, prompting U.S. Central Command to request the aircraft carrier Abraham Lincoln to be sent to the region.

The new bomber flight comes one week after President Trump threatened to retaliate against Iran after 21 rockets were launched at the U.S. Embassy in Baghdad on Dec. 20, the largest attack against the sprawling diplomatic compound in the past decade. The senior official said they also saw the "potential for other more complex attacks" against Americans in Iraq: "I think it is likely that the U.S. Embassy in Baghdad would be attacked again in some manner."

"We're seeing planning for, particularly in Iraq for complex attacks that require Iranian assistance in order to be pulled off," the official warned. "It's unclear to us, whether it's contingency planning, or whether it's a plan that is advancing because approval has been given and they're just trying to get all the pieces in place and execute."

While there is a range of potential attacks against Americans in the Middle East, the "most worrisome is within Iraq," the official said.

"We see a fair amount of advanced conventional weaponry of different types that has been flowing over the border into Iraq," they added. "The threat streams are very real." 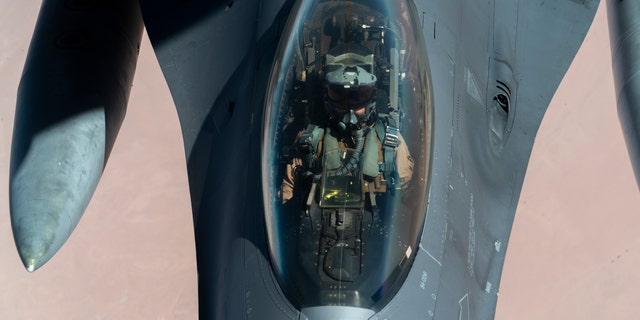 U.S. Air Force F-16 Fighting Falcon is aerial refueled by a KC-135 Stratotanker over the U.S. Central Command area of responsibility Dec. 30, 2020. The B-52 Stratofortress is a long-range, heavy bomber that is capable of flying at high subsonic speeds at altitudes of up to 50,000 feet and can carry nuclear or precision guided conventional ordnance with global reach precision navigation capability. (U.S. Air Force photo by Senior Airman Roslyn Ward)

IRAN BUILDS AT UNDERGROUND NUCLEAR FACILITY AMID US TENSIONS

When asked to explain what types of "complex attacks" Iran could be planning, the official said short-range ballistic missiles or potentially "unmanned systems," cruise missiles and "quad copters" similar to what was used in the attack on the Saudi Aramco oil processing facilities last year.

"The scale of that planning and the complexity of the attacks that are envisioned are something that has certainly got our attention."

In his tweet two days before Christmas, Trump showed photos of what he said were three rockets that failed to launch in the embassy attack and said they were from Iran. "Some friendly health advice to Iran: If one American is killed, I will hold Iran responsible. Think it over," the president said.

Since the rocket attack last week on the U.S. Embassy in Baghdad, Iraqi officials have made a number of arrests. "The Iraqis are really stepping up to the plate here" to disrupt future attacks against Americans, the official said.

All U.S. military planning against Iran is "defensive" in nature, the official said, as a precaution in case Iran does launch any new attacks against American interests. No offensive strikes are being planned, the official added. Messages warning Tehran have also been sent to Iran via intermediaries inside Iraq, the official said.

Last month, Iran’s top nuclear scientist was gunned down with what was reportedly a remote-controlled machine gun. Officials in Tehran blamed Israel for the targeted killing. Given the close ties between the U.S. and Israel, "There's a chance that we could be, you know, caught in the middle," the official warned.

On New Year's Eve last year, a mob attacked the U.S. Embassy in Baghdad. No Americans were hurt, but a quick reaction force of U.S. Marines was flown in from Kuwait to bolster security after the perimeter of the embassy was damaged in the unrest.

Last week, the guided-missile submarine USS Georgia armed with up to 154 Tomahawk cruise missiles and a dry deck shelter for Navy SEALs entered the Persian Gulf, according to the Navy’s 5th Fleet. It was the first public announcement of a guided-missile submarine transiting the Strait of Hormuz off the coast of Iran into the gulf in eight years. Escorting the submarine were the cruisers Port Royal and Philippine Sea, also armed with dozens of cruise missiles each. The guided-missile destroyer John Paul Jones is also on patrol in the Persian Gulf.

The aircraft carrier USS Nimitz is currently off the coast of Somalia in the Indian Ocean but could steam back north to the Arabian Sea to launch attacks from its dozens of F-18 Super Hornets, if needed, the senior military official said. Last month, a squadron of American F-16 jet fighters from Germany arrived at Al Dhafra Air Base in the United Arab Emirates.

The goal of the bomber flights, as well as the increased American firepower in the Persian Gulf in recent days, is to deter Iran for the purpose of "sending them a clear signal that should they decide to take action against our forces, we have the capability to respond," the official said.