Despite the obvious logic of joining a Netanyahu-led coalition for both Sa’ar and Bennett, both men are now refusing to speak with Netanyahu. Instead, they are chatting with Lapid to consider their prospects of working with him and his center-left bloc. 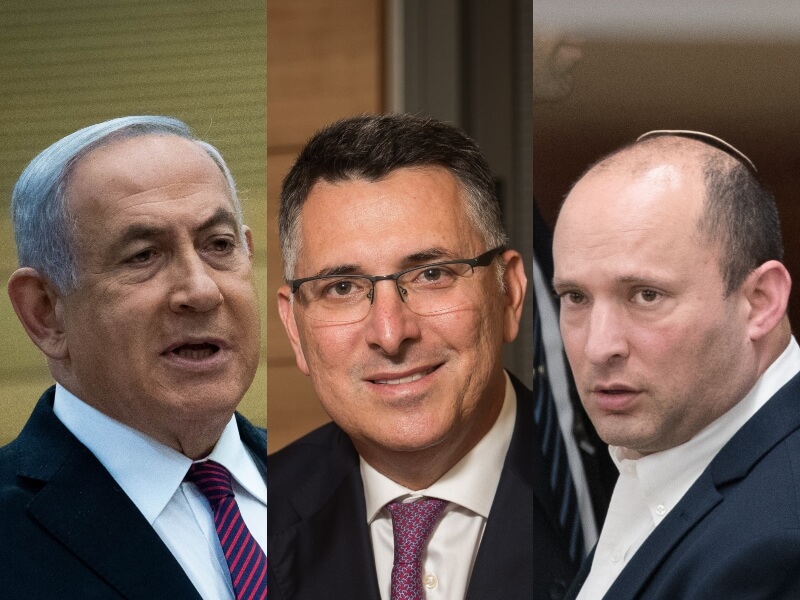 A month before Israel’s March 21 general elections, I argued in Newsweek that they would likely result in continued political paralysis. Last week’s election was Israel’s fourth election for its parliament—the Knesset—since April 2019. Based on the polls, I argued that nothing changed—those late March elections would lead again to a stalemate and force the country into a fifth election in August 2021.

Alas, the election results bore out my assessment. The ruling Likud party, under Prime Minister Benjamin Netanyahu, received 30 seats in Israel’s 120-seat Knesset. Together with its natural partners on the political Right, the Likud-led bloc is two seats shy of a 61-seat governing majority to form a government.

As these results make clear, the reason Israel has been stuck in a political stalemate for two years is not because Israel’s political Left is equally as popular as its Right. The reason for the deadlock is that two center-right parties, which together won 13 seats, are led by politicians driven mainly by their personal hatred for Netanyahu. Both the New Hope party, formed last December by former Likud Education Minister Gideon Sa’ar, and the Yisrael Beiteinu party, led by Netanyahu’s former chief of staff and former Defense and Foreign Affairs Minister Avigdor Lieberman, ran on platforms devoid of content beyond sheer personal hatred of Netanyahu.

Another rightist party, Yamina, led by Naftali Bennett, who also served as Netanyahu’s chief of staff and as defense and education minister, has not formally broken ranks with Netanyahu to join the NeverNetanyahu forces. But Bennett ran an anti-Netanyahu campaign and has positioned himself as the kingmaker in today’s post-election coalition wrangling. In fact, with his mere seven seats in the Knesset, Bennett is presenting himself as an alternative premier to Netanyahu.

Despite the right-wing political convictions of his voters, Lieberman formally removed his party from the rightist bloc after the first election in April 2019. In those elections, Netanyahu had secured a 60-member bloc. Lieberman, with his five seats, then stunned the political system when he refused to join the bloc and instead forced the country into a second—and later, third and fourth election. Lieberman’s voters are overwhelmingly Russian-speaking denizens of nursing homes who have little contact with information from independent sources. And Lieberman enjoys the loyalty of Israel’s Russian-language media.

Were Bennett and Sa’ar to both join Netanyahu, they would form a stable 65-seat center-right government that would be capable of advancing the Right’s policy and ideological goals. At that point, at the age of 75, after 16 straight years in office and three earlier years at the helm during the 1990s, Netanyahu would likely retire from politics. Bennett, Sa’ar and Netanyahu’s colleagues in Likud would be well-positioned after full terms in senior ministries to present themselves as credible successors.

Despite the obvious logic of joining a Netanyahu-led coalition for both Sa’ar and Bennett, both men are now refusing to speak with Netanyahu. Instead, they are chatting with Lapid to consider their prospects of working with him and his center-left bloc.

As of Wednesday afternoon, the main idea being discussed was one that would elevate Bennett to the head of a center-left government. The deal on the table would include a rotation agreement between Bennett and Lapid that would give Bennett the first turn at the helm for two years, after which Lapid would replace him.

Another possibility the three were considering involved establishing a parliamentary majority that would pass a law barring Netanyahu from forming a government. Such a scenario assumes that Likud would accept the legitimacy of the law after it passes. Under this scenario, Likud would then either join a government led by Bennett or Lapid or oust Netanyahu as party chair and present his successor as its candidate for prime minister. In the latter scenario, Netanyahu’s replacement in Likud would serve as the next prime minister and Bennett and Sa’ar would be his senior partners.

There are two problems with both scenarios now being discussed.

Bennett ran a campaign of obfuscation. He refused to commit to joining a Netanyahu-led coalition in the hope of winning votes from the Left, but committed to not serving in a Lapid-led government to maintain his support on the Right.

In fact, exit polls indicate that only one of Bennett’s seven seats came from center-left voters. If Bennett takes his seven seats into a leftist-dominated government, he will lose the support of 6/7ths of his voters—and, with them, any hope for a political future.

Moreover, with a mere seven seats to his name (and perhaps another six with Sa’ar’s faction), Bennett will not be able to win approval from his own government for any of his programs. The leftist majority will vote him down at every turn and render him nothing more than a right-wing figurehead at the helm of a leftist government. The prospects for such a government surviving for more than a few months are negligible, as members of Bennett’s own faction will likely bolt in protest.

Sa’ar’s prospects in such a scenario are little better. If Bennett refused to commit to joining a Netanyahu-led government in order to win votes from the center-left, Sa’ar was certain that running against Netanyahu and committing to not joining a Netanyahu-led government would win him massive support on the center-left. Sadly for Sa’ar, the electoral map made clear the vastness of his miscalculation. According to exit polling, at most two of Sa’ar’s six seats came from center-left voters. The rest apparently left Likud with him in December. If Sa’ar helps form a leftist government with Bennett as its titular leader, he too will have no future in politics.

The second scenario the three are now discussing is equally problematic for both Bennett and Sa’ar. While it is true that there are many senior Likud parliamentarians that have been chomping at the bit waiting impatiently for Netanyahu to retire so they can take the helm, they understand that Likud’s voters will not accept Netanyahu’s ouster through parliamentary tricks. If Bennett and Sa’ar join Lapid in passing a law that blocks Netanyahu from forming a government, Likud is unlikely to oust Netanyahu. Likud would instead go to a fifth round of elections and run on a platform of abrogating the law.

In the meantime, Netanyahu would remain the head of a caretaker government. Bennett and Sa’ar would be discredited in the eyes of their own voters. And Netanyahu’s chance of winning a clear majority would be better than it has been since the first election in April 2019.

This brings us to Lapid. As the head of the center-left bloc, Lapid’s calculations are sharply divergent from Sa’ar’s and Bennett’s. He has no investment in their future—to the contrary, once Netanyahu is gone, Lapid would be better off without them in the game at all. So by cooperating with them to bring down Netanyahu, Lapid is trying to kill three birds with one stone. The day after Netanyahu is brought down or their law is passed, Bennett and Sa’ar would become the most hated politicians on the political Right. Lapid, in contrast, would unify the center-left around him and be well positioned to emerge as the largest party with 25-35 seats in a new election.

The most immediate advantage both Sa’ar and Bennett enjoy due to their opposition to Netanyahu is adulation from the media. But like right-wing politicians before them who preferred good press to rightist principles, they will soon discover that for right-wing politicians, media support is fool’s gold. They will enjoy its as long as they fight Netanyahu. But if they manage to beat him and then return to the Right, the media will turn on them in prompt and harsh fashion.

Sa’ar is 54 years old, and Bennett is 49. Their futures lay before them. The hung elections provide them with the opportunity to join 71-year-old Netanyahu as full partners in his final government, and advance their ideological and policy agendas. If they do, they will solidify their positions as leaders in their political camp and increase their prospects of replacing Netanyahu in 2026. But if they choose instead to work with Lapid to oust Netanyahu now, it’s far from clear they will successfully get rid of him—and it is certain they will destroy their political futures and doom their country to at least another six months of political paralysis.