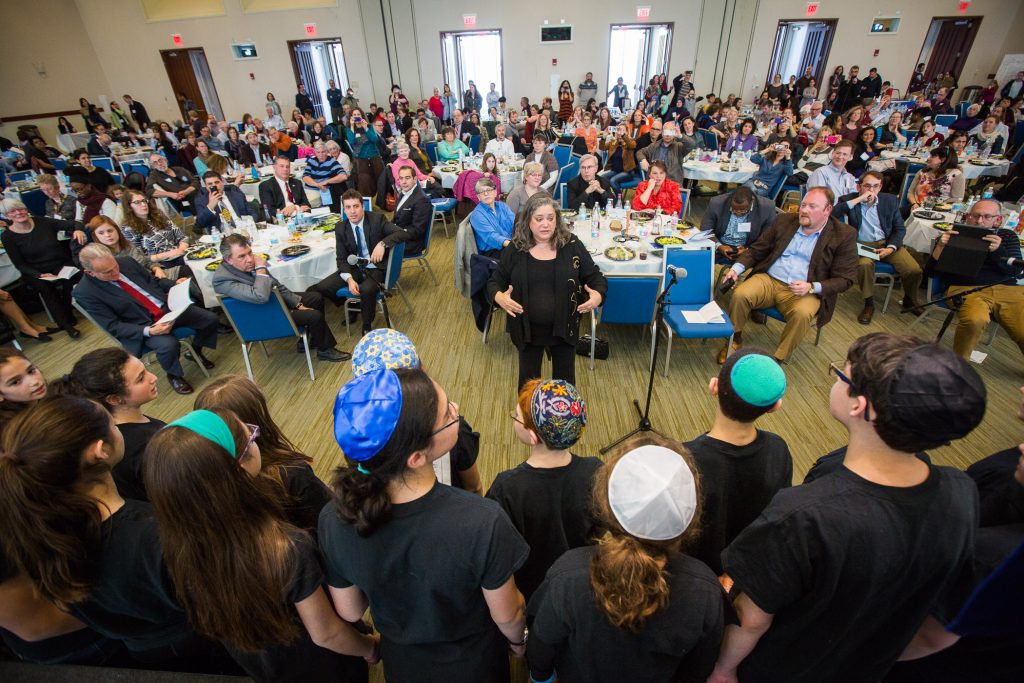 After being forced by Covid-19 restrictions to celebrate Passover alone last year, like their Israeli brethren, American Jews were by and large able to celebrate the Passover seder with their friends and families this year. And as in Israel, American Jewish families reveled in their deliverance from loneliness on the Jewish festival of deliverance.

But even the joy of Passover couldn’t dispel the twin storm clouds rising around the largest Jewish diaspora.

The first threat is growing Jew-hatred. American Jewish groups are good at fighting white supremacism. Unfortunately, the most dangerous external threat to Jewish life in America doesn’t come from neo-Nazis. It comes from their home base.

Along with Hindus, Jewish Americans are the most highly educated religious group in America. American Jews have long assumed that the primary source of anti-Semitism in America is ignorance and that as education levels rise, levels of anti-Semitism would decrease. Given the prevalence of anti-Semitism on university campuses, researchers at the University of Arkansas decided to check this assumption.

Publishing their findings this week in Tablet magazine, they demonstrated just how wrong this assumption has become. Contrary to what Jewish organizations have long claimed, it turns out that the more educated Americans are, the more anti-Semitic they are.

The implications are dire. Academia, American Jewry’s home turf for a century and the key to their entry into the American elite – is now hostile territory.

Then there is the media. In the mid-20th century, American Jews were pioneers of the US mass media, entertainment and music industries. Increasingly, however, today they are their punching bag.

Last month, Saturday Night Live’s Weekend Update segment included a “news brief” on Israel’s Covid-19 vaccination effort. The punchline had Israel only vaccinating its Jewish citizens. This lie didn’t come from nowhere. It was born in the slander that the only liberal democracy in the Middle East is a racist state. SNL’s employment of the slur was an expression of its general acceptance in progressive circles today.

A few days later, NBC‘s drama series “Nurses” depicted Orthodox Jews as rabid racists. Resonating Nazi propaganda, a scene in the show depicted an Orthodox Jewish patient and his family rejecting his doctor’s recommendation that he receive an organ transplant because the organ may come from a “non-Jew.”

Obviously, the show’s writers, producers and directors wouldn’t have incorporated this rank anti-Semitism into their script if they didn’t believe it or feared they wouldn’t get away with it.

And so far, they have gotten away with it.

A week and a half ago, CNN host Don Lemon appeared on ABC‘s The View to discuss remedies for America’s supposed “structural racism.”

Lemon said a first step to purging Americans of racism was for them to replace their pictures of Jesus which portray him as “a hippy from Sweden or Norway” with new ones that show “what Jesus looked like.”

“Either a black Jesus or a brown Jesus because we know Jesus looked more like a Muslim,” Lemon declaimed, knowingly.

Like SNL’s anti-Semitic joke, and “Nurse’s” anti-Semitic drama, Lemon’s failure to mention that Jesus was a Jew from Bethlehem didn’t come from nowhere. It came from Nation of Islam leader Louis Farrakhan. Today the preacher who admires Hitler is viewed as an “authentic” woke religious leader by millions of woke revolutionaries. His celebrity arguably makes him the most powerful Jew-hater in American history. Lemon’s statement echoed Farrakhan’s assertion that Jews are “fake Jews,” and that the “real Jews” are blacks and Muslims.

The Grammy Awards ceremony last month made clear that woke anti-Semitism isn’t a bar for entry into the top echelons of American celebrity culture. It may even be an asset. Black activist Tamika Mallory, who referred to Farrakhan as “the GOAT” (i.e., the greatest of all time) gave a speech about racial justice. And singer Dua Lipa, who has attacked Israelis as “fake Jews” and claimed Hamas is an Israeli invention performed at the event.

Then there is the Democrat Party – the political home of 65-75% of American Jews. It isn’t simply that anti-Semitic politicians like Rashida Tlaib, Betty McCollum and Ilhan Omar are now ascendant, or that pro-Israel politicians like Elliot Engel and Dan Lipinski have been booted out of power.

It isn’t even simply that senior politicians like New York Governor Andrew Cuomo and New York City Mayor Bill Deblasio use anti-Semitism to rally their supporters or that President Joe Biden has appointed open Israel haters and BDS activists to senior positions in his administration.

Last week Biden held a Passover seder at the White House which erased the Jews and God from the story of their deliverance from Egypt. The White House invited the progressive, anti-Israel rabbi Sharon Brous to officiate at the event that rewrote and de-Judaized every aspect of the Jewish festival of Jewish freedom.

Disastrously, these assaults on all aspects of Jewish life and identity by the woke left are happening as many American Jews are abandoning their Judaism because they see little reason to remain actively Jewish. More than 70% of non-Orthodox Jews who get married, marry non-Jews. Even more startling, only half of non-Orthodox American Jews of marriage age (25-54) are married at all. Of those who are married, only 15% are raising children as Jews. Non-Orthodox Jewish women have the lowest fertility rates in the US.

Given the data, it makes sense that 65-75% of American Jews remain in a political and ideological home that is hostile to Jews. It’s a matter of priorities. It also explains why much of the communal response to both rising anti-Semitism and rising assimilation has been ineffective and even counterproductive.

Take the Anti-Defamation League, for instance. With an annual budget of around $100 million, the ADL is supposed to be the community’s first line of defense against anti-Semitism. But with leadership comprised of dedicated foot soldiers of the progressive revolution, who rather than fight the TV networks proliferating anti-Semitic conspiracy theories and libels, or the BDS brownshirts on campuses terrorizing Jewish students, the ADL has devoted its resources to fighting “white supremacy.” To be sure, as the Pittsburgh and San Diego synagogue shootings made clear, white supremacists are a threat. But unlike the progressive Jew-haters, white supremacists have no foothold in the mass media, in politics, in academia or in popular culture.

In January, a group of powerful leftist Jewish groups with strong ties to the Biden administration including J Street, Americans for Peace Now and the New Israel Fund began lobbying the administration to cancel the Trump administration’s decision to adopt the definition of anti-Semitism produced by the International Holocaust Remembrance Alliance. The IHRA definition asserts that rejecting Israel’s right to exist and applying a double standard when judging it are forms of anti-Semitism.

These determinations make IHRA a problem for progressive anti-Semites who routinely reject Israel’s right to exist and apply a double standard to delegitimize it.

As for the crisis of assimilation, rather than give American Jews a reason to live full Jewish lives, powerful Jewish institutions are denying there is a problem. This week, researchers at Brandeis published a new survey of the American Jewish population which determined that the Jewish population in America is growing, not shrinking. According to the study, there are 7.6 million Jews in America. This number is a striking departure from demographer Sergio Della Pergola’s 2019 study which concluded the community has shrunk to 5.7 million.

The Brandeis researchers “discovered” an additional 1.9 million Jews by counting Americans who describe themselves as “Jews with no religion” and “partial” Jews. They also included 1.2 million children growing up in homes with at least one Jewish parent being “raised as a Jew in any way,” which as American Jewish writer Jonathan Tobin notes is a “requirement so loosely defined as to be meaningless.”

Tobin noted that by expanding the number of Jews to include those with only the most attenuated relationship with Judaism, the Brandeis study provides a rationale for Jewish organizations to devote a larger portion of the (rapidly shrinking) communal resources to people with little attachment or interest in Judaism, and to do so at the expense of American Jews committed to living Jewish lives.

A growing number of committed American Jews are already finding themselves on the outs with their communities. Over the past five years, stories have abounded of members of Reform and Conservative congregations who have been ostracized or forced to leave their communities due to their conservative political beliefs. The most frequently affected have been Jews who openly supported then-president Trump.

Fighting assimilation trends has also gotten many Jews into hot water. American Jewish historian Jack Wertheimer has reported that Reform and Conservative rabbis who refuse to perform intermarriages have been sanctioned and even fired from their pulpits. He noted as well that Reform rabbis who simply encouraged their synagogue members to date other Jews have faced negative repercussions from their congregants. Intermarried couples, he reported, increasingly expect their rabbis to perform services celebrating Jewish and Christian holidays to make their non-Jewish spouses feel welcome.

Jewish organizations that seek to act on behalf of communal interests by fighting progressive anti-Semitism are also coming under attack. Perhaps the most prominent example is Boston’s Jewish Community Relations Council decision to consider a petition by progressive groups to expel the conservative Zionist Organization of America (ZOA) from its ranks.

While the JCRC rightly recognized that “expulsion [of the ZOA] at this time would not serve the interests of the JCRC or of the broader Jewish community in Boston,” it didn’t question the legitimacy of the petition to expel the ZOA.

Former US ambassador to Israel Dan Shapiro recently attacked as “racists” and “bigots” Jews who voiced opposition to Biden’s appointment of Arab Americans with open records of hostility towards Israel and support for Palestinian terrorism. Shapiro argued that their Arab identity gives them a pass for advocating on behalf of Israel’s destruction.

The silver lining in the gloomy picture is that between 25% and 40% of American Jews remain deeply committed to their Judaism and to preserving, defending and passing on their identity to the next generation. This group includes both Orthodox Jews, Zionist Jews of varying levels of religious observance and politically conservative Jews. As the progressive Jewish American establishment focuses on reaching out to assimilated Jews and appeasing progressive Jew-haters, Israel can and must support this committed minority. Such assistance will no doubt increase their numbers and empower them to stand up for themselves and their rights as Jews.

Such assistance will ensure that that American Jews will continue to join their Israeli counterparts in singing “Next Year in Jerusalem” for generations to come – and many will do so in Jerusalem with their grandchildren.