In a speech that he delivered at a January 3, 2014 political activists' conference in Mashhad (northeastern Iran), Majlis representative Mohammad Nabavian, a member of Ayatollah Mohammad Taqi Mesbah Yazdi's radical faction, said that despite its disinterest in a bomb Iran in fact does need one, in order to create a balance of terror vis-a-vis Israel.

In his address, Nabavian cited statements made by members of Iran's negotiating team – President Hassan Rohani, Foreign Minister Mohammad Javad Zarif, and his deputy Abbas Araqchi – to the Majlis on the course of the three rounds of the Geneva talks in October-November 2013. According to him, they said that during Rohani's September 2013 visit to New York, the White House had pleaded with him to meet with President Obama or at least talk with him by telephone. They also stated that Secretary of State John Kerry told the Iranian team about the vigorous protests that he had heard from Israeli Prime Minister Netanyahu before arriving in Geneva for the talks.

It should be noted that the Tasnim website, which was the first to quote Nabavian's statements, removed the part about the nuclear bomb, but it was published on other sites as well. 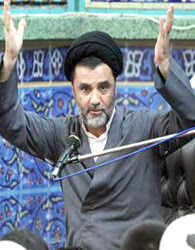 Below are the main points of Nabavian's speech, as quoted by the moderate conservative website Asr-e Iran:[1]

"...The [nuclear] agreement [with the P5+1] contains five clauses: a preamble, first step, interim step, final step and final conclusion. The first part determined from the outset that the objective of the negotiations was to reach a plan that would guarantee to both sides that Iran's nuclear program is purely civilian… The U.S. says: 'Never before did we succeed in ensuring Israel's security like we did today [by means of the agreement]. If a certain country has 270 kg [of enriched uranium at a level of] 20% and 10 tons [of enriched uranium at a level of] 5%, and 20,000 centrifuges, it will be in a breakout position and could manufacture a nuclear bomb on the uranium [track] within two weeks.' We don't aspire to obtain a nuclear bomb, but it is necessary so we can put Israel in its place…"