The relationship between China and Israel is based largely on harmonious economic cooperation, although security implications cannot be ignored as the Belt and Road Initiative is implemented. 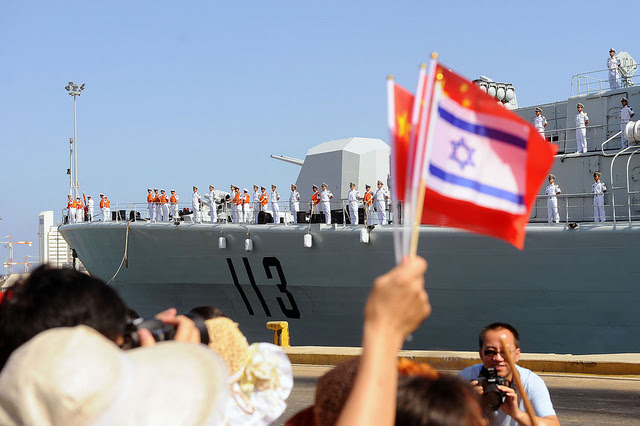 EXECUTIVE SUMMARY: The relationship between China and Israel is based largely on harmonious economic cooperation, although security implications cannot be ignored as the Belt and Road Initiative is implemented. It can be argued that China is interested in playing a risky game in the region that goes beyond economics. Still, the two countries can look for new, original fields in which to collaborate. Jerusalem’s experience of remembering the Holocaust and combating deniers might be useful with respect to Beijing’s remembrance of the Nanjing Massacre.

Chinese VP Wang Qishan, who came to Israel at the end of October, was the highest-ranking Chinese official to visit Israel since 2000. The visit was indicative of the Chinese government’s interest in bolstering Beijing’s relationship with Jerusalem.

Innovation is key to the relationship. President Xi Jinping’s vision is to develop his country into a world leader in science and technology as it strives for prosperity and rejuvenation. Foreign experience and know-how are therefore needed. Wang Qishan and Benjamin Netanyahu co-chaired the fourth joint committee on innovation, which was established four years ago to facilitate communication among ministries, government agencies, universities, and research centers.

From an Israeli perspective, China is an important destination for its exports, a source for incoming tourism, and an investor. Last year, bilateral trade volume (including Hong Kong) was circa $16 billion. Figures from the Israel Central Bureau of Statistics show an upward trend in 2018. From January until September, bilateral trade volume reached $14.1 billion, in comparison to $12.1 billion in the same period in 2017. As far as tourism is concerned, approximately 114,000 Chinese visited Israel in 2017, an increase of 41% over 2016. Estimates for 2018 are positive despite a sharp decrease in arrivals in the first months of the year. (This is largely attributed to unrest along the Gaza-Israel border and Chinese concerns about safety following the decision by Donald Trump to move the US embassy to Jerusalem.)

Sino-Israeli relations are also flourishing in the sector of infrastructure works. Several Chinese companies have already invested or will be investing in major projects. China Civil Engineering Construction Corporation (CCECC), for instance, participated in the construction of the Carmel series of road tunnels in Haifa. China Railway Tunnel Group (CRTG) won a bid to help build the first light rail system in the Tel Aviv metropolitan area. Last year, China and Israel signed a housing construction agreement. Chinese companies are also involved in the construction or management of Israeli ports. China Harbors Pan Mediterranean Engineering Company (PMEC) was chosen in 2014 to construct the new port of Ashdod on the Mediterranean. A year later, Shanghai International Port Group (SIPG) won a tender to run Haifa Port for 25 years beginning in 2021.

The warming of Sino-Israeli ties and the involvement of Chinese companies in Israeli infrastructure entails a degree of security risk. The transfer of military technology from Israel to China is one area of concern. Several deals were canceled a few years ago, mainly in response to American pressure.

Currently, security concerns are centering around the possibility that China might collect sensitive information and intelligence from civilian systems when, for example, SIPG undertakes the management of Haifa Port. While the Israeli government is able to protect key industries and strategic assets, it is not ignoring recommendations for a more comprehensive review mechanism regarding foreign investments.

In addition, China’s expanding presence in Israel – and in other Middle Eastern countries through which the Belt and Road Initiative will pass – is generating debate about possible repercussions. Most Western scholars see a geopolitical vacuum resulting from the American pivot to Asia that could be filled by China. At first glance, such a development would not appear to favor Jerusalem, because Beijing supports the Palestinian cause. During his visit, Wang Qishan went to Ramallah, met with Palestinian PM Rami Hamdallah, and called for concerted global efforts to push for a settlement on the basis of a two-state solution. The two sides are expanding their cooperation in the framework of the Belt and Road Initiative. Sino-Palestinian trade volume reached $69.28 million in 2017, up 16.2% in comparison to 2016.

Generally speaking, China wants to move forward on the peace process. In July 2017, Xi hosted Mahmoud Abbas in Beijing and revealed a four-point peace plan. This plan is regularly used by the Chinese delegation at the UN as a reference point. Proactive intervention is not, however, on Beijing’s agenda. It prefers to keep its distance and let others take on the onus of mediating rather than invest its own diplomatic capital. China’s priority is the successful realization of the Belt and Road Initiative, in which Israel, several Arab countries, and the Palestinians are all participating. It is premature to say whether the initiative will turn out to be an integration mechanism to foster peace.

China and Israel are very different in terms of demography and geopolitical orientation, but have found fields in which they can cooperate to mutual advantage. Although an emphasis is placed on economic and security ramifications, culture and history cannot be sidelined. Similarities between the civilizations, as developed in East Asia’s Chengdu Valley and Mesopotamia, are characteristic. A relevant international exhibition, entitled “Bronze Age Mesopotamia and the Chengdu Plain,” is currently being shown at Sichuan University Museum. Objects displayed include artifacts from the Bible Lands Museum in Jerusalem. Moreover, the historical relationship among Jews, China, and the ancient Silk Road is starting to be explored.

China’s stance vis-à-vis the Jewish people during the Nazi horrors deserves particular attention. When Netanyahu visited Shanghai in 2013, he hailed the city for having been a haven for Jews fleeing Nazi-occupied Europe in the 1930s and 1940s. Indeed, Shanghai received more than 25,000 Jewish refugees from Europe. This historical experience can be linked to the theme of Holocaust education in China. The country is keen to learn more and is drawing on Israeli lessons about how to remember the Holocaust and combat deniers. By applying these lessons to its remembrance of the Nanjing Massacre, China can honor its past and outline its contribution to peace during WWII.