What Happened to Israel’s Sovereignty at its Borders? - Douglas Altabef


The clear implication is that Israel has no right to patrol and guard and control its sovereign territory as it sees fit. 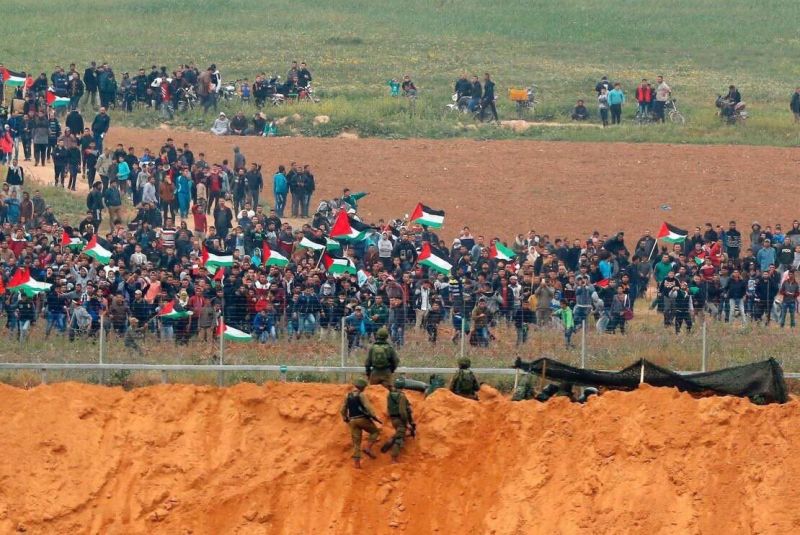 Thousands of Gazans riot at the border with Israel, throwing live grenades and explosives at IDF soldiers and into Israeli territory
Photo Credit: IDF Spokesperson's Office via Twitter


We have internalized the idea that individual nations are sovereign – independent, and in control of their respective countries. They protect their own borders, using soldiers who are part of an army of that sovereign power.

All countries respect the rights of other countries to exert their sovereignty in such ways as a particular nation sees fit.

It all sounds well and good, but it all breaks down in the case of Israel. When Israel seeks to protect its borders or transition points to sensitive areas, it is frequently met with contempt – contempt for its soldiers guarding these locations, and, by extension, contempt for the nation itself.

How is this manifested? “Observers” routinely hover at checkpoints or guardhouses to “monitor” the behavior of the soldiers manning them. In practice, this monitoring often takes the form of subtle or not so subtle harassment, in which observers film soldiers at extremely close range, hoping to provoke a reaction from a soldier that can go viral as an act of oppression, or even a war crime.

Much of this contemptuous behavior is undertaken or sponsored by the European Union, individual European governments or NGOs connected with them.

What is the significance of this despicable behavior?  First and foremost, it shows a complete disregard and derogation of Israeli sovereignty. The clear implication is that Israel has no right to patrol and guard and control its sovereign territory as it sees fit.

Did these countries not get the memo informing the world some 70 years ago that Israel was now an independent nation, just like all the member states of the United Nations? Or is this part of the creeping and creepy morphing of the European Union into an imperialist entity that is uncaring as to national borders and nation states in general?

One senses that even with the EU’s transnational orientation, Israel is a special case. There is the clear sense that somehow Israel’s sovereignty is contingent and conditional; it exists at the sufferance of the European nations from whom most of Israel’s founders fled.

It is no secret that the EU and most Western European countries support the Palestinians. They are eager to see a Palestinian state come into existence, regardless of the security implications that would entail for Israel.

The policies of successive Israeli governments have therefore been maddening to varying degrees. From the European perspective, the Netanyahu government has been one of the worst, because there has been no movement, no meaningful concessions, to reaching the goal of Palestinian statehood.

So, Europeans have decided to use the back door. They employ anti-Zionist Israeli NGOs to espouse the policies that they, the Europeans, are seeking to implement. The idea here is that if actual Israelis push for these policies there will be a greater likelihood that their government will comply.

At the same time, the Europeans have chosen to react as if the problem didn’t exist, meaning as if there was no Israeli sovereignty to begin with.

This attitude is manifested in the harassment of soldiers at checkpoints and at sensitive locations such as Hebron. Harassing the soldiers of a foreign country is akin to not recognizing the legitimacy of that country, nor the soldiers who serve it.

Until recently, Israel has chosen to endure this state of affairs. Army protocols allow for civilians to approach soldiers and to film them in close proximity. The government typically does not interfere with the resulting harassment by arresting or deporting those who undertake it.

Fortunately, change is coming because Zionist organizations and citizens are revolted by the free hand that these loathers have had.

One effort undertaken by Im Tirtzu, Israel’s largest grassroots Zionist organization, is particularly promising. Im Tirtzu has recruited a group of volunteer “Video Commandos,” who have been fighting fire with fire, employing the same rights of proximity exploited by the demonizers.

The Video Commandos recently achieved a significant victory when the primarily Scandinavian EAPPI, an affiliate of the anti-Zionist World Council of Churches, announced that they were leaving Hebron because of the “harassment” their volunteers had recently been subjected to.

That “harassment” was nothing more than turning the tables on them, presenting EAPPI with a new reality. Suddenly, the Video Commandos were showing exactly what EAPPI members were doing in their efforts to demonize soldiers.

That new reality, and the prospect that the anti-Israel activities of these provocateurs will be widely broadcasted to the Israeli public, is a powerful tool.

At a time when our soldiers are being harassed by these filmers with impunity, there is nothing more fitting than to fight fire with fire.